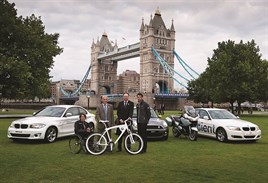 The London Organising Committee of the Olympic Games (LOCOG) has set a target of average CO2 emissions from its fleet of cars to be less than 120g/km.

BMW is supplying LOCOG with nearly 4,000 cars for the event and to help meet this benchmark, 200 of the vehicles are to be electric.

“London 2012 is an amazing opportunity to showcase a wide range of sustainable transport solutions,” said Michelle Roberts, BMW’s corporate communications manager for London 2012 “and EVs will undoubtedly play an important role, together with many other technologies.

“The balance and breadth of different transport and technology solutions represented by the BMW Group vehicles we will deploy at London 2012 will reflect the wide range of solutions that will be required to make mobility increasingly sustainable in the future, including electric cars.”

This EV fleet is to comprise 160 ActiveE 1 Series and 40 Mini E hatchbacks – pre-production models that are still undergoing field testing.

In itself, this presents a challenge for BMW – putting new technology to the test in a high-profile, high-pressure environment – and LOCOG has also to ensure that the infrastructure to support the EVs is adequate.

It is working with Transport for London (TfL), which recently announced “a significant number” of new GE-supplied recharging points, which will –post-Games – become part of the Source London network.

LOCOG has not, as yet, released any further details on these points, their distribution around the Olympic Park and Village, and their specification. However, it’s expected that they will include high-voltage fast-chargers which can give quick top-ups of battery power.

Nevertheless, the EVs will be deployed for suitable tasks which can be carried out within their range.

“The fleet provision is being made to support the transportation requirements of a diverse audience including athletes, technical officials, media, LOCOG operational teams, national Olympic Committees, International Sports Federations, the IOC and marketing partners,” said Roberts.

However, while the Mini E, which has its rear seats replaced by its battery pack, and the three-door, 1-Series-based ActiveE will not be able to transport teams of competitors, other vehicles BMW is supplying will be more versatile.

The exact make-up of the remainder of the Olympic fleet has not been confirmed as yet, but it will include the ActiveHybrid 5, based on the 535i saloon and on sale in the UK in February 2012.

It boasts a combined consumption figure of 44.1 mpg and a CO2 output of 149 g/km, which equates to a benefit-in-kind tax rate of 19%. The drivetrain combines the 3.0-litre petrol engine of the 535i with an electric motor and an eight-speed automatic gearbox.

At speeds of up to 37mph the ActiveHybrid 5 can travel up to 2.4 miles on electric power supplied by the lithium-ion battery stored in the boot.

The internal combustion engine comes into play when the driver needs more power or the energy stored in the battery is exhausted. When accelerating, the electric motor assists the petrol engine by providing an additional boost, resulting in acceleration to equal that of a 535i: 0-62 mph in 5.9 seconds and a limited top speed of 155 mph.

The lithium-ion battery is charged whenever the car is braking, with the electric motor performing the role of a generator.

“The Olympic fleet cars will be loaned to LOCOG and then returned to BMW,” said Roberts. “For the conventionally powered vehicles, the cars will be sold over a period of time post-Games into the used car market.”

BMW will also supply 400 bicycles and a number of motorbikes.