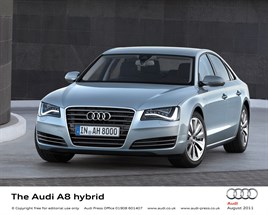 The Audi A8 hybrid has been given the green light for series production beginning in 2012 and will reach the UK late next year.

Employing a four-cylinder petrol engine for the first time in an Audi model at this level, it will offer performance befitting its 245PS and 480Nm outputs, despite delivering more uncharacteristic sub-148g/km CO2 output and all-electric, completely local emissions-free running at speeds of up to 62mph.

The Audi A8 hybrid can drive at up to 62mph purely on electric power and has a range of up to 1.86 miles at a constant 37mph.

This gives the driver the choice of three modes: the ‘EV’ setting gives priority to the electric drive; the ‘D’ option efficiently controls both the engine and the electric motor; and the ‘S’ mode and the tiptronic gate place the emphasis on optimal acceleration.

The hybrid saloon has five operating states: with the TFSI engine alone, with electric drive only or in hybrid mode; recuperation and boosting are also possible. Two displays show the driver all operating modes in detail.

The lithium-ion battery, which weighs 36.7 kilograms, is located in a crash-proof area in the boot. It provides 1.3 kWh of nominal energy and up to 40 kW of power. Two different methods are used to air-cool the battery, depending on need: air is either blown from the passenger compartment by a fan or via a separate cooling circuit coupled to the automatic air conditioning system.

In visual terms, the Audi A8 hybrid is distinguishable by subtle details such as its 18-inch or optional 19-inch ten spoke alloy wheels which resemble turbine blades, hybrid badges and an exclusive Arctic Silver paint finish. The metallic paint finish is a standard feature, as are three-zone automatic air conditioning, LED headlights and a BOSE sound system.

Thanks to the brand’s ultra-lightweight construction expertise, the Audi A8 hybrid will be one of the lightest saloons in its category. Its ASF (Audi Space Frame) body is made almost entirely of aluminium, with ultra-high-strength steel used only for the B –pillars to optimise rigidity. Weighing just 231 kilograms, it is roughly 40 per cent lighter than a comparable steel construction.