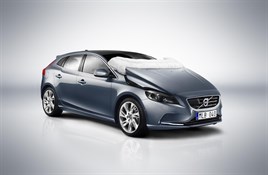 Five new cars have been awarded a maximum Euro NCAP rating in the latest crash tests.

The Ford B-Max, Volvo V40, Renault Clio, Kia Ceed and Audi A3 have all achieved the highest result possible in the independent European tests which test front, rear and side impacts as well as pedestrian safety.

The Volvo V40 achieved the highest ever individual score in the tests, while the B-Max achievement is impressive as it does not have a fixed B-pillar in the car's structure.

Ford’s European safety project manager Tom Overington said: "Safety is a fundamental Ford value and we are delighted to achieve the maximum five-star rating from Euro NCAP. The team has worked very hard on making sure B-Max meets the safety standards our customers expect from every Ford vehicle."

The B-Max scored an impressive 92% in the adult occupancy test. The removal of the middle columns in the B-Max structure, known as the B-pillars, has meant a structure is incorporated into the doors to form a central post when the doors are shut.

Volvo’s V40achieved 98% in the adult occupancy test and 100% in the safety assist test thanks to technology such as the world-first pedestrian airbag, fitted as standard on the entire V40 range. In the case of a collision with a pedestrian the airbag lifts the bonnet and partly covers the stiff A-pillars.

Senior technical advisor safety at Volvo car corporation Thomas Broberg said: "We are very proud to have one of the world's safest cars and we're taking yet another important step toward our 2020 target - that nobody should die or be seriously injured in a new Volvo."

The Isuzu D-Max achieved a rating of four stars, significantly better than when it was last tested in 2008.

Euro NCAP secretary general Michiel van Ratingen said: "In Europe, 14% of all road traffic fatalities are pedestrians. While in the last three years Euro NCAP has increased the requirements, the vehicle manufacturers have stepped up to the challenge. The scores observed today were unthinkable just a few years ago with the new V40 setting a new standard."