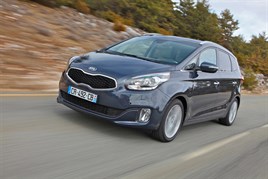 Small fleets are set for a big role in plans aimed at making Kia a major business car supplier by the end of the decade.

Rising SME demand has prompted the burgeoning Korean manufacturer to develop its position in the sector as part of reaching its target of 70,000 registrations this year.

“New products drive rapid growth and we have expanded by around 20% each year for the past five years as a result.

“But with vehicles now competing in all the mainstream market sectors, we aim to open up further opportunities based on niche models we believe will appeal to smaller enterprises.

“As we’ve expanded, most of our sales have been conquests from Ford, Vauxhall and the French.

“Over the next three years, I think our annual growth will be between five and 10% as improving RVs help win more repeat business.”

Speaking as the firm announced its half-millionth UK registration since setting up 22 years ago, Philpott added: “I’m convinced this brand has the potential to match the size of Peugeot or Nissan in this country with volumes around 100,000 – and we’ll achieve selling our next half million units before 2020.”

But he said he had no plans to lift Kia’s overall fleet business to more than 45%. “While I want us to be represented in every fleet channel, I want us to focus on contract hire and leasing and for our dealers to step up operations with small and medium businesses,” he said.

“I don’t intend to increase fleet volume via heavy discounts – with demand running ahead of supply for several models, there’s no need for us to go after more expensive business.

“We’ve come a long way from being a budget brand – people are just waking up to what we’re all about and I want to keep up the momentum.”