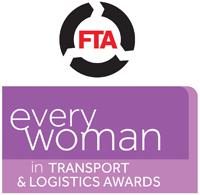 There is now extra time to nominate successful women in transport and logistics with the extension of the deadline for Freight Transport Association (FTA) Everywoman in Transport and Logistics Awards nominations.

The Awards are free to enter and owing to a high level of interest, nominations can now be made until February 9, 2015.

June Powell, FTA’s director of compliance management, who is on this year’s Awards judging panel, said: “The FTA Everywoman in Transport and Logistics Awards are the perfect opportunity to showcase how women can make a career in transport a successful and fulfilling one.

"We hope that they will continue to uncover inspirational role models, improve the image of the industry, and demonstrate that the support and development of female talent is taken seriously within the sector.”

Entries are sought in the following categories:

FTA has supported Everywoman and its initiatives since 2008, including the Everywoman in Transport and Logistics Leadership Academy, and the FTA Everywoman Accelerate Programme.

As part of the continued collaboration, the Association became the title partner for the FTA Everywoman in Transport and Logistics Awards in 2013.