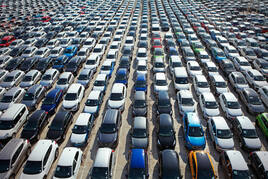 Data from Volkswagen Financial Services UK (VWFS) suggests more people are buying used SUVs in 2021 than in 2018, while smaller used models have fallen in demand during the same period.

However, demand for smaller models has fallen by 34% during the same three-year timeframe, it says.

The Skoda Karoq is the model that has seen the biggest growth between 2018 and 2021, with finance cases for used models almost quadrupling since 2018.

VWFS’s data insights team suggests the research illustrates a definitive shift in the UK’s used car buying habits, with people choosing to buy bigger models as a result of changes brought about by the pandemic.

For example, research from VWFS earlier this year found that 76% of people in Britain are more likely to travel in their own vehicle as opposed to getting public transport due to Covid-19.

According to the study, six in 10 (60%) people also agreed that their private vehicles have risen in importance since the pandemic.

Mike Todd, CEO at Volkswagen Financial Services UK, said: “I think our research illustrates the seismic impact of the pandemic on our everyday lives, with many people placing greater importance on personal vehicles due to increased mileage and less dependence on public transport and car sharing. That’s why it stands to reason that bigger models have grown in popularity as people are turning to cars with more space, and vehicles that they feel safe and comfortable in.

“I also believe this trend will continue to accelerate, especially as staycations seem here to stay and people are generally becoming more environmentally conscious, so may be inclined to choose a road trip to a domestic beauty spot rather than a holiday overseas.”

Aston Barclay has reported increases of more than 40% in the first nine months of 2021 across three sectors of the used market.

Meanwhile, having passed £10,000 for the first time ever in August, average monthly used car values at BCA climbed again during September to reach £11,817. It is the fourth consecutive month that BCA has reported record used car values.

The substantial rise is the largest monthly increase in average car values ever recorded at BCA and was heavily influenced by the rich mix of stock on offer across BCA’s online sales platforms and the impact of a shortage of new product in the market.

Year-on-year, average monthly values are up by 41.3%, the highest annual increase recorded.

Used car transactions grew by 108% year-on-year in the second quarter of 2021, according to the Society of Motor Manufacturers and Traders (SMMT).