Deadline extended for the Amazon Everywoman in Transport & Logistics awards 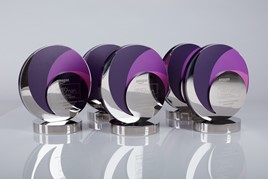 The deadline to enter the 2022 Amazon Everywoman in Transport and Logistics awards has been extended for two weeks until February 21, 2022.

The awards, in its 15th year, celebrate the vital contribution women make to transport and logistics showcasing progression, accomplishments and increasing avenues of opportunity.

The winners will be announced at an awards ceremony on June 30, 2022, in London.

Maxine Benson MBE, co-founder of Everywoman, said: “It’s been another extraordinary year for transport and logistics, with a continued need for adaptation and innovation at every level and across growing areas of the industry.

“Now more than ever, it is important that we identify and celebrate the women whose resilience, skills, and leadership are making transport and logistics the dynamic industry that it is and have kept the country moving in persistently difficult times.

“We look forward to shining a spotlight on some of the most exceptional women whose achievements will motivate others to consider a career in a male-dominated industry, paving the way for future generations of ground-breaking women to succeed.”

There will be two winners per category (Leader and Above and Beyond) as well as one recipient of the Industry Champion, Male Agent of Change, Apprentice of the Year and Woman of the Year Award.

In recognition of the role technology has played in transforming the sector, 2022 will see the continued Tech Innovation Award that was established last year.

The awards were launched to inspire more women to progress careers in the industry.

For more information or to nominate, visit the Amazon Everywoman in Transport and Logistics Awards website.

The Freight Award – awarded to two winners exemplifying the excellence, drive and innovation of women across the freight subsector

The Infrastructure Award – awarded to two winders exemplifying excellence, drive and innovation of women across the infrastructure subsector

The Supply Chain Award – awarded to two winners exemplifying excellence, drive and innovation of women in the supply chain system

The Warehousing Award – awarded to the two winners exemplifying the excellence, drive and women of women across the warehousing subsector

The Male Agent of Change Award – awarded to a role model who is actively committed to encouraging, advancing, sponsoring, or championing the progress of women in transport and logistics in his organisation and beyond

The Tech innovator Award – awarded to a woman designing, developing, researching, implementing or being exceptionally creative with technology within the transport and logistics industry

From campaigning at a political level, to developing the next industry leaders; from transforming the way congestion is managed, to delivering a multi-million pound revenue gain: meet four women making their mark in transport and logistics

Fleet News is extending its new Diversity and Inclusion fleet category at the Fleet News Awards 2022 to encompass Wellbeing.

The 2022 Amazon Everywoman in Transport and Logistics Awards are open for nominations until February 7, 2022.