Transport Minister extols the virtues of the fleet industry 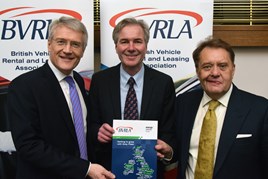 The Minister of State for Transport has agreed to work with the rental and leasing industry to tackle issues of accidents, emissions and congestion.

Speaking at the British Vehicle Rental and Leasing Association’s (BVRLA) annual Parliamentary Reception at the House of Commons, the Rt Hon John Hayes CBE MP showed a keen understanding and acceptance of the BVRLA’s work.

At the event Gerry Keaney, BVRLA chief executive, welcomed the Minister and re-iterated the association’s calls for the Government to step up and deliver a framework for a nationwide network of low emission zones to improve air quality.

Hayes said: “In the work we do, in particular cities on emissions in their own zones, we need to take into account the particular needs of that locality, but not at the expense of a policy that is nationally consistent. It is an important balance to strike, and I’m mindful of what you said about it today. I will go back as a result of those further overtures that you have made to check again whether we’ve got that right.”

Keaney also highlighted that BVRLA members’ number one concern in 2017 was getting to grips with Brexit.

Hayes responded: “I think there are significant opportunities and what we have to do is define what those opportunities are and work with businesses like yours and organisations like the BVRLA to take advantage of those.”

“I understand the point you made and I will feed that back into my department and certainty take full account of it.”

Proving once again that he is the Champion of the Motorist, Hayes added: “I am strongly in favour of the opportunity provided by people’s ownership of vehicles and acquisition of vehicles.

“I believe in road users. I believe in people having the ability to drive a van, hire a car, use a vehicle for their own personal economic use or for their own recreational use. Let us make a bold and proud case for the joy of driving and not be slightly shame faced about it.”

Hayes was joined by fellow Transport Minister Andrew Jones, more than 75 BVRLA members from 50 companies and numerous other MPs at the event, which took place on Wednesday evening in the Churchill room at the House of Commons.