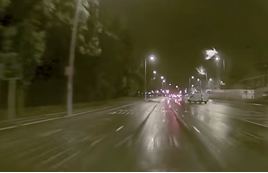 The moment a van spins wildly out of control, colliding with an oncoming taxi, has been captured by a 3G vehicle camera.

The incident, captured on an Intelligent Telematics device, took place late at night during poor weather conditions on the North Circular (A406) in North London.

The footage clearly shows the van spinning almost 270 degrees, with the rear of the vehicle colliding with the side of the taxi. The quick-thinking taxi driver does attempt to swerve out of the way, preventing a much more serious crash, but is unable to avoid the van completely due to the speed of the incident.

The taxi was fitted with Intelligent Telematics’ IT1000 3G forward-facing vehicle camera, which captured and transmitted footage of the incident and supporting vehicle information to a web-based interface within seconds of it occurring. This has provided the taxi firm with proof of what really happened to establish fault and avoid any fraudulent or 50/50 claims.

In addition, the 3G capability will have allowed its insurance partner to immediately access the footage, as opposed to with a traditional SD-card camera solution that would require data to be manually removed and sent.

Nick Plowman, chief operating officer of Intelligent Telematics commented: “An increasing number of car, van and commercial vehicle operators are using our 3G vehicle cameras to monitor road collisions, near misses or harsh driving events within their fleets. Without the added protection it provides, companies are faced added insurance costs and higher levels of risk that could otherwise be avoided.”