Drivers most likely to break speed limit in the early hours

Almost two-thirds (63%) of drivers break the speed limit at 4am, with Sunday the most common day of the week for speeding, new research suggests.

The data, obtained from the Department for Transport by price comparison site MoneySuperMarket, reveals that more than half of vehicles exceed the speed limit on a Sunday (53%), with Saturday coming in a close second (52%).

By comparison, drivers are most likely to abide by the law on a Wednesday, when less than half (47%) exceed the limit.

Rachel Wait, consumer affairs spokesperson at MoneySuperMarket, said: “Our findings suggest that drivers are looking to take advantage of emptier roads on weekends and in the early hours, but it is important to remember that there are still major safety rules to abide by, no matter what time it is.”

The research also found that Yorkshire and the Humber (10%) are twice as likely to have been convicted as those in London and Northern Ireland (both 5%).

The study also analysed drivers’ reasons for speeding, with most saying they simply were not paying attention to their speed (42%). In addition, four in 10 drivers say they were running late (40%), while 17% did it out of habit.

Previous research has shown that there is a disparity in the number of drivers detected for speeding offences suggesting a postcode lottery, according to Home Office figures.

Of these detections: 44% resulted in the offender being sent on a speed awareness course; 34% attracted fixed penalty notices (FPN); 11% were later cancelled; and 10% resulted in court action.

Most common days for speeding 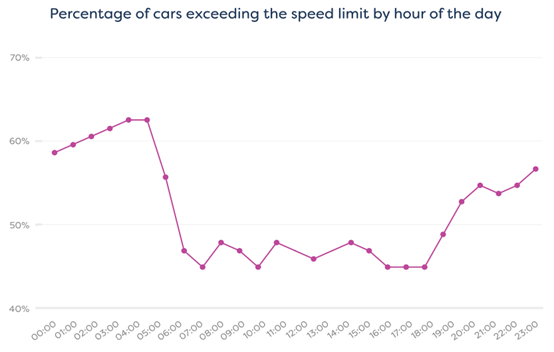