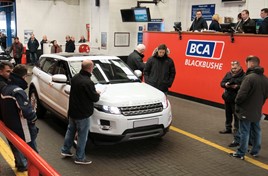 Average used car values at BCA rose to record levels in September 2019, as buyer demand surged after the summer holiday period and the company reported a strong trading month both in-lane and online.

All sectors saw values increase in September, with fleet/lease product rising by over £1,000 month-on-month to reach a record value of £12,160.

Dealer part-exchange values rose by £160 over the month, while nearly-new values reached record levels, rising by £3,438 in September to average over £27,000 for the first time.

“High levels of demand and competitive bidding across the range of used stock available at BCA, pushed average values for fleet and contract hire and nearly new vehicles to record levels.

He added: “The strong used car market has continued as we enter October and BCA continues to win and retain business and enhance our selling programmes through all our selling channels.”

Dealer part-exchange values improved for the second month running, rising by £160 (3.2%) during the month to reach £5,203, the joint second-highest value this year.

Average values for part-exchange vehicles rose by £72 (1.4%) compared to the same month last year with stock showing a similar profile of age and mileage.

Values for nearly-new vehicles at BCA rose to their highest point on record, climbing by £3,438 in September to average £27,306.  Year-on-year values were up by £1,995 (7.9%).  Model mix has a significant effect in this sector, with brand specific winners and losers.

The board of BCA Marketplace has accepted a £1.9 billion offer from LeasePlan private equity owners TDR Capital, which will now be recommended to shareholders

Partnership to remarket ex-lease cars, CVs and de-fleet inventory extended to end of 2023

BCA has released a major change to its Buyer app with the introduction of live bidding from mobile devices.