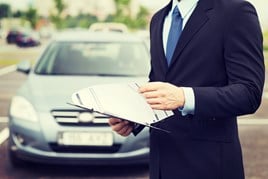 The British Vehicle Rental and Leasing Association (BVRLA) updated its Fair Wear and Tear guide in April after feedback from end-user fleets, its own members, remarketing experts and other fleet stakeholders to help improve clarity on what is often a contentious issue.

However, while the absolute figures are in decline, there are clear differences between the charges levied at cars on business contract hire (operating and finance lease) and those funded via salary sacrifice schemes.

Leased cars were hit with average fair wear and tear charges of £326, while salary sacrifice cars averaged £271. The FN50 asked leasing companies to split out the figures for the first time.

It suggests that either employees take greater care of cars their perceive as their own than they do a company vehicle – certainly this could be the case when comparing job-need cars to sal/sac – or that leasing companies are less willing to charge individuals than they are companies.

There were also differences in the percentage of cars charged and the level of the damage waiver.

Overall, the average percentage of cars being charged increased from 39% to 40%, while the average damage waiver fell from £167 to £117.

However, 43% of leased cars were charged fair wear and tear but only 31% of salary sacrifice cars were hit with charges. Likewise, the damage waiver for leased cars was £112, but sal/sac drivers had a more generous £133.

Both were significantly below last year’s overall average. This means there is a much smaller margin for error, increasing the likelihood that charges will be applied when vehicles are returned.

Average charges for leased cars covered a wide spread, from a high of £759 to a low of just £45 per car, showing wild variances from leasing company to leasing company.

If you isolate the 10 biggest leasing companies that provided figures, the average leased car figure is £319.51, down from £330 last year, so the companies that account for the most volume in the UK leasing industry have charges at a lower level than average.

The BVRLA’s aim with its guide is to provide an industry-wide, accepted standard that defines fair wear and tear when vehicles are returned by fleets to their leasing or rental company.

It also provides advice for best practice in vehicle maintenance and upkeep that will prevent unacceptable wear and tear charges occurring.

A BVRLA spokesman said: “With personal contract hire responsible for a growing portion of the BVRLA car fleet, there was extra focus on improving clarity and demonstrating fairness, especially when customers return a vehicle at end of lease.

“With many customers new to the concept of vehicle leasing, and possibly unsure of their responsibilities in maintaining the vehicle, members will be providing more help and support during the period of lease or rental.”

This might also explain the lower charges levied at salary sacrifice drivers, many of whom will also be facing wear and tear charges for the first time. Their experiences here will go some way to determining whether they stay in the scheme.

The guide gives advice to drivers about what they need to do to avoid end of lease charges, where they can get advice on routine maintenance, servicing and appraising the vehicle at the end of the lease and what they can expect the day the vehicle is returned, as well as how to complain if things go wrong.

Some leasing companies offer a fixed-cost menu of charges set out at the start of the contract.

Others do not repair vehicles before sending them out to auction, so do not charge for the cost to repair the damage.

Instead, they charge for the loss of value against the residual value due to the damage.

There are other alternatives. Fleet management specialist ARI Fleet UK has moved into the finance lease space, offering funding with no mileage limits or end of contract damage charges.

Rory Mackinnon, head of asset funding at ARI Fleet UK, explained: “Fleet managers are looking for support on cost management strategies and we have been working closely with our customers to deliver this.

“We identified an opportunity for a specialist finance solution to help drive down fleet costs. For too long, fleet managers have had to contend with excessive leasing fees and we are looking to challenge the status quo and disrupt the market.”

Nick Hardy, sales and marketing director at Ogilvie Fleet, Fleet News’ Leasing Company of the Year (up to 20,000 vehicles) and 15th in the FN50, says its fixed-cost menu pricing approach creates a transparent process for customers.

“We don’t see EOC as a profit centre,” said Hardy. “We need to cover our costs and, at the moment, we’re still doing that. If we weren’t washing our face we may need to go back to customers and have that conversation, but at the moment I’m glad we don’t need to do that.”

Ogilvie isn’t the only leasing company in the UK that uses a menu pricing scheme for EOC, but those using this system are still in the minority.

Hardy said: “Everyone should be charging within the BVRLA guidelines, but there’s nothing in there that is going to dictate pricing.

Caroline Sandall, chairman at fleet operators association ACFO, said: “We worked with the BVRLA on developing the new guide in April this year and, generally, the rules have relaxed.

“The updated guide should make it much easier and clearer for drivers what is expected. The level of damages is very black and white and prescriptive so there should be less confusion on EOC.”

Sandall says areas like dents on the bonnet or alloy damage were particularly contentious elements for fleets on fair wear and tear charges.

She added: “There were some small grey areas on the old version, but now it is much more prescriptive around the number of acceptable chips in a given area on the vehicle.

“There has been an increase in EOC complaints for the BVRLA due to the increased focus on personal leasing, but they have worked to make the guidelines much clearer to address that.”

The average end of contract charge (EOC) for vehicles on salary sacrifice was £271, according to the FN50 data.

Salary sacrifice was the second largest market segment for funding type after contract hire in this year’s FN50 figures, representing 3.9% of volumes overall, but is still a small fraction of the market compared with traditional contract hire which accounts for 92% of the market.

A smaller number of vehicles on salary sacrifice attracted EOC charges, too, at 31% compared with leased cars at 43%.

Both figures suggest leasing companies are more reticent to apply charges to a form of funding that has been under pressure from changes to the taxation rules. Nevertheless, there are big variances in the average charges applied, ranging from £485 to £105.

The AlphaRent team, which manages all aspects of vehicle rental and rental customer service for Alphabet customers, scooped the Customer Service Team of the Year award at FN50 2019.