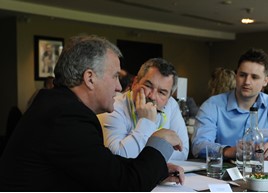 Fleets in our Fleet200 Executive Club discussion had varying experiences with electric vehicles, with some not yet having trialled them and others having run them for 10 years.

Those with experience were typically travelling 50-60 miles per day but, with the latest EVs, they were able to increase this to more than 100 miles and depend on rapid charging for ‘on-route’ charging when necessary.

One fleet said: “We have never had an issue with range or EVs running out of electricity.”

Those running electric vans with depot charging reported that the biggest part of the project was creating the charging infrastructure. The cost of civil works to install cables for charge points was a particular issue, one that fleets needed to factor into their investment calculations.

User-chooser car drivers tended to opt for the added flexibility of a plug-in-hybrid, primarily due to the preferential benefit-in-kind tax position. However, some drivers have moved back to diesel due to lack of model availability and the improved BIK position of compliant Euro 6d diesels which are exempt from the 4% BIK charge.

There were some concerns with range for job-need cars but the biggest issue was price and a lack of discounts/support.

One fleet said: “There will never be a better time to buy an EV than now because the price will never change. In the future, there will be increases in tax on EVs as revenues from diesel fall.”

Fleets are switching to EVs for various reasons.

The biggest reason is the environmental argument, not cost, especially with incentives already falling (although it was noted that SMR costs are lower).

However, compliance is becoming a major factor as the regulatory framework in urban areas moves towards EVs. Oxford and some parts of London have already introduced (or announced) EV-only areas.

“This will happen, but there is an issue with the piecemeal approach leading to different standards in different cities,” said one fleet. “It is preposterous that we could be allowed into one city centre but not another due to the different standards.”

Other reasons included expectations from customers and to support contractors who couldn’t afford to pay the clean air zone charges for non-compliant vehicles.

Issues/concerns included grid capacity and lack of supply, described as “horrendous” by one fleet. “We were told it would be a few months; it ended up being 12 months,” he said.

“The issue is down to battery supply by they don’t tell you that upfront. We even asked that question and they claimed it wouldn’t be an issue, but it obviously is.”

Worryingly, fleets believed there was a huge missed opportunity due to the lack of supply, which they predict will be a problem for the next two or three years. Many would switch more vehicles to EVs but are being forced to stick with diesel as they have vehicles that need replacing now.

“I was an early adopter of electric technology seven years ago and now I’m very against the idea. An electric car is another means of carbon offsetting, the same as ultra-low emission and clean air zones," said one fleet manager.

“It’s a form of gerrymandering – fleets will operate their cleanest vehicles within the ULEZ or CAZ boundary and operate their dirtiest cars in the shires. Air quality will improve in the densest population centres, but move the pollution further out, ‘to a town near you’. You have to do this because you can’t replace your dirtiest cars overnight.

"I was running a fleet of about 2,500 trucks in London about 18 months ago and to make our fleet ULEZ compliant across all the boroughs was going to cost us £72 million in capital expenditure. We sat down with the London mayor to explain we couldn't afford it, even replacing the vehicles in tranches, but it fell on deaf ears so we got into the carbon offsetting."

Initially, drivers didn’t want electric vehicles because they were something new and unknown. However, it is a different story once they have been behind the wheel.

“We have some fitted with trackers – the cars were being driven hard because they were so quick and fun to drive,” said one fleet.

“Now they are used to them, they love them, but we have done some driver training to educate them.”

However, there is still some uncertainty, for example, the taxation implications when staff charge the cars at customers’ premises. And there are concerns about how well prepared the breakdown operators are to collect EVs, especially when they have been damaged.

On the plus side, those fleets de-fleeting EVs report they are being “snapped up immediately for good money” at auction.

Several companies are now offering EVs and PHEVs on their choice lists. Staff have to fill in a matrix to determine whether an EV is appropriate for their role and travel requirements.

Fleets are taking control over how PHEVs are used. Drivers are only concerned about the BIK savings, but if they don’t charge the cars – instead running on the inefficient petrol engines – this is flagged and addressed.

Additional points raised by fleet decision-makers in the EV discussion

Learn more about the club and if you are fleet decision-maker you are welcome to join (for free).

Ford has outlined an EV strategy that encompasses mild hybrid, self-charging hybrid, plug-in hybrid and battery electric solutions across its cars and vans.

A £41 million Energy Superhub with the power to charge hundreds of electric vehicles at the same time is to be built in Oxford to help “kickstart an EV revolution”.