Ford to roll out its mobile servicing throughout UK 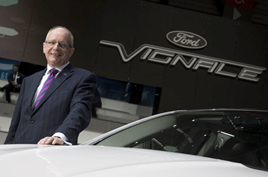 Ford intends to roll out its mobile servicing initiative across the country over the next year, offering scheduled maintenance for cars and vans to corporate customers at their premises or employees’ homes.

It launched the mobile service via eight vehicles within the M25 last year, focusing primarily on vans.

But Ford chairman and managing director Andy Barratt recognises the benefits to company car drivers as well, in terms of convenience.

Eventually, he aims to have more than 100 mobile units operating from Ford Stores and Transit centres.

“It will give us a great platform for nationwide coverage,” Barratt said. “It also lengthens our relationships with the customer; it’s not just for new cars but for used as well and that will increase the propensity for them to continue their relationship with their dealers.”

As a Ford Store offering, mobile servicing complements the launch of Vignale, Ford’s premium brand which is sold through the 68 outlets.

More than 400 Mondeo Vignales have been sold so far, said Barratt, who describes the concept as “competing with premium, without being a premium brand”.

The mix is 50-50 fleet-to-retail, with around half conquest; Vignale has helped Ford to get on more choice lists.

“I am spending more time going out to see fleets and I am learning something new all the time,” Barratt said.

“I am seeing their interest in Vignale; it gives them more selection for their senior teams and a more affordable option. And with S-Max Vignale, it is a lifestyle premium choice.

While the aftermarket will be a major focus for Ford in 2016, it is also planning to take “dramatic steps” to reduce its rental volume in a continuation of a policy introduced five years ago, according Barratt.

Despite a small rise in rental registrations last year (by 6% to 46,445), the company has spoken to the pricing guides about its plans as it looks to protect its residual values.

It will replace that business with growth in its Ford Lease operation, white-labelled via ALD, which provides funding for local businesses. In the past three years, volumes via this channel have increased by 500%.

Meanwhile, a new marketing campaign is challenging preconceptions about the carmaker. Called ‘Unlearn’, it is Ford’s biggest brand campaign for more than a decade.

Barratt said: “It is challenging people to reconsider Ford. We have had fleet customers that love the campaign, asking us to go and talk to them – the feedback has been positive.”