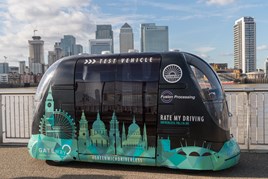 Three-quarters (78%) of people broadly support the idea of driverless vehicles on city streets, provided they are safe and resistant to a cyber attack.

The results, published by the Greenwich Automated Transport Environment (GATEway) Project and based on its three-year research programme, were were taken from sentiment mapping, an online map capturing the public’s comments.

People were able to test prototype vehicles and services through simulated trials, and experience a public shuttle service which offered a hop-on hop-off service at the Greenwich Peninsula.

More than 5,000 people signed up to participate in the self-driving shuttle service trials, which were also open to residents and visitors to Greenwich, and 1,300 members of the public were interviewed.

Leading the study was a consortium made up of industry experts, academics and the Royal Borough of Greenwich. Research was conducted by TRL – the UK’s Transport Research Laboratory, the University of Greenwich, Commonplace and the Royal College of Art.

The GATEway Project has focused on people, rather than technology, inviting the public to experience prototype technologies in a real world setting, complete with pedestrians, cyclists, rain and snow. This provided novel opportunities for researchers to gain insight into the challenges of implementing new forms of transport in complex real world environments.

Richard Cuerden, academy director at TRL, said: “This is just the beginning of the journey towards connected and autonomous vehicles.

“Thanks to the GATEway Project’s research, the UK is in a prime position to build upon the lessons learned and experienced gained in trialling a whole range of driverless vehicles in urban environments.

“We see driverless vehicles as a practical solution to delivering safe, clean, accessible and affordable mobility and we are proud to be part of creating our future transport system.”

In a separate survey, the University of Greenwich found that 43% felt positive towards the concept of driverless vehicles and 46% were undecided, citing key concerns about cyber security (44%) and road safety (51%). Only 11% of participants felt negatively towards these future forms of transport.

However, both the survey and sentiment mapping were conducted before a pedestrian was killed by an Uber autonomous car involved in a trial in the US.

Investigations by the US National Highway Traffic Safety Administration and the National Transportation Safety Board are ongoing into that incident.

A new parliamentary group has been launched to increase awareness of the benefits and opportunities of electric and automated vehicles.