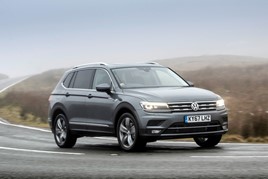 True fleet sales were 6.1% down in October, despite the overall market’s improved performance of -2.9%.

It was a close race as Volkswagen, Ford and Mercedes were only separated by 86 registrations. With a 31.5% growth, BMW in fourth place achieved the biggest percentage growth within the top 10. 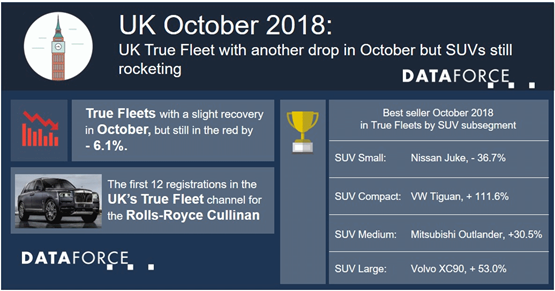 The positive result was mainly fuelled by the 5 Series (especially the Plug-In version 530e) and the 2 Series Gran Tourer, which scored its best market share in the British fleet market up to now.

Both the XC60 and the S90 more than doubled their registrations, while the all-new XC40 also contributed significantly.

Small, Compact and Medium SUVs all achieved new all-time records in October and with 2.52% the group of Large SUVs was very, very close to achieving the same. But this award still goes to March 2017 with 2.54%.

Let’s have a closer look at these segments. The two top-sellers within SUV Small, Nissan Juke and Vauxhall Mokka, were both in the red but all other models in the top 10 raised their volumes or were new entries like the T-Roc from Volkswagen (already 3rd in October) or the Seat Arona (10th).

The Volkswagen Tiguan was clearly leading the Compact SUV class and more than doubled its registrations over October 2017. The same holds true for the Mercedes GLA, ranking third behind the Nissan Qashqai while the Grandland X from Vauxhall is currently the most successful new entry both in the current month and year-to-date.

The Medium SUV segment was led by a Japanese model: the Mitsubishi Outlander and its preferred powertrain is clearly the PHEV. Eight out of ten company car drivers opted for the Plug‑In version. Mercedes GLC (2nd, + 82.0%) and Volvo XC60 (3rd, + 103.4%) had a massive jump but the Peugeot 5008 even had a five-digit growth rate and gained no less than 19 positions pushing the first domestic model, the Land Rover Discovery Sport aside.