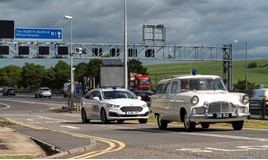 Ford brought together new and old police cars to celebrate 60 years of the M1 motorway.

When the original stretch of the trunk road, which runs through Hertfordshire, Bedfordshire and Northamptonshire, opened, Farnham’s conversion of the Ford Zephyr saloon to an estate was chosen to patrol the road by the three counties’ police forces.

To mark the anniversary, the last remaining example of this car was brought together with the new petrol-electric version of the Ford Mondeo estate.

Chris Smith, Highways England’s assistant safety coordinator for the East of England, said: “Cars have changed beyond recognition in the last 60 years, and the motorways they drive on have too.

“Our first motorways had no speed limit, no safety barriers and many cars, which were not designed for motorway speeds, ended up on the hard shoulder.

“Today’s motorways are packed with technology to help people on their journeys, with variable speed limits to help smooth out stop-start traffic and signs and signals to warn drivers about changing conditions on the road ahead.

“On smart motorway sections, such as on the M1 between junctions 13 and 16, we’re making better use of the hard shoulder by making it available as an extra lane of traffic.”

Ford has managed to fill a niche with the Mondeo Hybrid. It is luxurious, smooth and cheap to run considering its performance.

Ford will introduce a Mondeo Hybrid Estate as part of a refresh of its hybrid model in 2019.

Ford has updated the Mondeo for 2019 with new prices and a new hybrid estate.