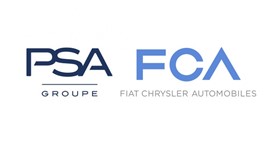 Both businesses agreed to a 50:50 merger and will bring together their capabilities in the technologies shaping the new era of sustainable mobility, including electrified powertrain, autonomous driving and digital connectivity.

The new entity expects to sell more than 8.7 million vehicles each year.

Annual cost savings of £3.2bn are expected as a result of the deal, with no planned plant closures.

The Board will be composed of 11 members: Five Board members nominated by FCA (including John Elkann as chairman) and five nominated by Groupe PSA (including the senior independent director and the vice chairman). The chief executive officer is Carlos Tavares for an initial term of five years and he is also a member of the Board.

Tavares said: “Our merger is a huge opportunity to take a stronger position in the auto industry as we seek to master the transition to a world of clean, safe and sustainable mobility and to provide our customers with world-class products, technology and services. I have every confidence that with their immense talent and their collaborative mindset, our teams will succeed in delivering maximized performance with vigor and enthusiasm.”

Mike Manley, FCA CEO, added: “This is a union of two companies with incredible brands and a skilled and dedicated workforce. Both have faced the toughest of times and have emerged as agile, smart, formidable competitors. Our people share a common trait - they see challenges as opportunities to be embraced and the path to making us better at what we do."

FCA previously sought a merger with PSA-rival Renault earlier this year, but the deal was unsuccessful

PSA, which owns Peugeot, Citroen, DS and Vauxhall, was also involved discussions of a potential merger with British brands Jaguar and Land Rover.

It successfully acquired Vauxhall from General Motors in March 2017, following a platform sharing agreement that lead to the co-development of the Peugeot 3008 and Vauxhall Grandland X. All future Vauxhalls are expected to sit on PSA platforms.

It is unclear how the FCA fleet operations would be affected by the merger with PSA, but Vauxhall’s fleet team has remained separate from PSA’s corporate sales team.

Each brand – Peugeot, Citroen, DS, Vauxhall and Opel – will have one or more electrified version of models by the end of 2020