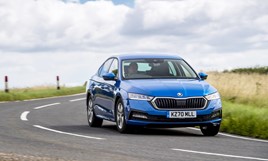 Skoda is to add a 1.0 TSI e-Tec engine to its Octavia line-up – its first mild hybrid powertrain.

The new unit, which is equipped with a seven-speed DSG gearbox as standard will be available on two trim levels – SE First Edition and the fleet-focused SE Technology - priced from £23,005.

It uses a 48-volt lithium-ion battery and a combined belt-driven starter-alternator and allows the Octavia to coast with the engine switched off for extended periods, with the electric motor maintaining power to essential systems like the car’s power steering.

The mild hybrid system can also recover energy during braking and store it in the battery to support the combustion engine by providing it with an electric boost.

CO2 emissions for the new models begin at 115g/km, putting the car in the 26% benefit-in-kind tax band.

The new e-Tec will be joined at a later date by an iV plug-in hybrid variant. The e-Tec models can be ordered from September 22.