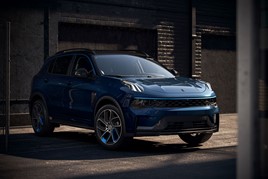 Lynk & Co, the new shareable car brand, is launching in Europe this month and is targeting fleet memberships as a major part of its business model.

While the Geely-owned brand (which also owns Volvo) has already been operating in China since 2017, the first of its physical brand experience “Club” locations in Europe will open in Amsterdam before the end of October, alongside switching on its online sales and membership offering.

A UK launch of its hybrid 01 SUV, with a London Lynk & Co Club, won’t be until 2022 as the brand is not planning to produce right-hand drive (RHD) models until then.

However, Alain Visser, Lynk & Co chief executive, told Fleet News the UK would be the second largest market in Europe after Germany.

“There is a major opportunity for success through memberships for fleet businesses for those companies looking to be more sustainable and to reduce costs.”

In Europe, Lynk & Co customers can sign up for a month-to-month membership with a car for up to €500 (£456) per month or opt to lower their monthly costs by sharing a car.

Memberships can be cancelled with a month’s notice.

Alternatively, customers can sign up for a free membership and access to the Lynk & Co app and only pay when they borrow a car.

Visser gave the example of a fleet with around 200 vehicles being able to replace those vehicles with 50 and then sharing them all through memberships.

Employees would be able to share vehicles between them and this could also be a new way to organise pool cars, or short term rental vehicles.

As there are no early termination fees as each contract runs for a month at a time, Visser said Lynk & Co memberships would allow fleets to scale up and down vehicle numbers as needed.

Visser also confirmed there would be nothing stopping a fleet from making their 01 vehicles shareable to the public to reduce the monthly rental costs and further increase fleet utilisation.

He said: “You could switch on some or all of the fleet to be shared and earn money back from the monthly cost, just like a retail customer would.”

During Lynk & Co’s Europe launch livestream, one of the executive team said it is possible to rent out a vehicle enough to the point where the monthly cost goes down to zero.

There won’t be a national sales company in the UK, but there will instead be a small dedicated Lynk & Co team in a local office, probably based in London, of eight to 10 people, including marketing, sales, PR and a fleet team.

When asked whether launching a sharable car brand during a pandemic would hinder the launch of Lynk & Co in Europe, Visser acknowledged there would be some challenges.

He said: “It’s true, there may be some hesitancy and a smaller risk right now about sharing vehicles but we’re working on the infrastructure to make sure vehicles will be as clean as possible after being used by different members.”

"However, I think Covid-19 could actually help us from a membership perspective because I think a lot of people have seen their cars sitting on their drive or outside their house not being used and that cost of ownership.

"As a result I think that might mean more customers would consider our subscription model."

Other than Lynk & Co’s membership model, Visser said servicing will be one of the biggest differentiators.

The company is currently working on a deal with the Volvo dealer network to provide servicing for Lynk & Co members.

He said: “We’re not treating afterasles as a profit centre.

“Each time a vehicle gets serviced, we will be reducing our profit because the servicing of vehicles is all included in the monthly price, so we’ll be taking care of that for them as we have factored that into our costs.

“It will also benefit dealers as they will be getting incremental servicing work.”

Based on the Volvo XC40 SUV, Lynk & Co’s 01 SUV is the brand’s first model to be available to European customers.

It will be offered with plug-in hybrid (PHEV) and HEV powertrains, with the former claiming an emissions-free electric range of up to 43 miles.

The 01’s specification follows the model set by the brand’s membership model, with “everything included” as standardm including maintenance, insurance and tyres. There will be two colours to choose from at launch, blue or black.

Details on CO2, MPG and Euro NCAP ratings are to be revealed at a later date.

Sixt’s new flexible and all-inclusive car subscription service, Sixt+, has been officially launched with packages starting at £399 per month.