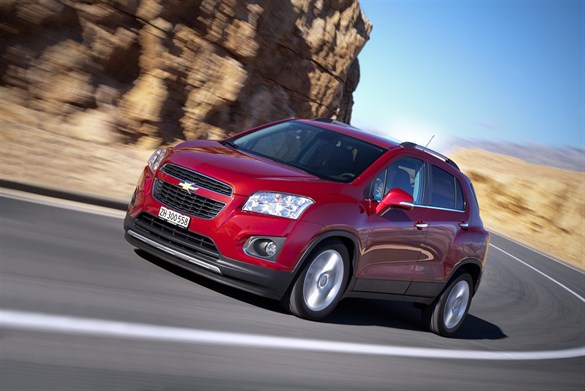 As a small player in the UK with a market share of just 0.66%, people may be surprised to learn that Chevrolet is the fourth largest car brand worldwide – in fact, a Chevrolet is sold every 6.4 seconds.

The growing small/compact SUV segment has seen many new players emerging, with more expected to join over the coming months. Chevrolet hopes the launch of the new Trax will enable it to lure business away from the likes of the Nissan Juke, Peugeot 2008 and Renault Captur.

Arriving in dealerships in July, the Trax is the first vehicle from Chevrolet to include MyLink technology. Standard on  the LT equipment grade, MyLink enables drivers to access their phone’s stored media and data. The system is displayed on a seven-inch touchscreen with smart-phone looks. It offers buyers a low-cost alternative to traditional satellite navigation and includes Siri technology from Apple. 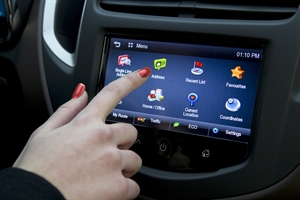 The materials used in the interior are of good quality while generous standard equipment includes stop/start, Bluetooth and privacy glass.

Plentiful space is one of the Trax’s stand-out features, with multiple storage options in the cabin and a load space up to 1,370 litres when the back seats are fully folded.

Other useful touches include a domestic plug socket in the centre console.

The Trax is closely related to the recently launched Vauxhall Mokka and comes with the same engine options – two petrol and one diesel. The car on test, the 1.7 128bhp turbo diesel, is fairly noisy and labours at lower revs.

The Trax will be available in two equipment grades, LS and LT, and Chevrolet expects the latter to be the most popular. 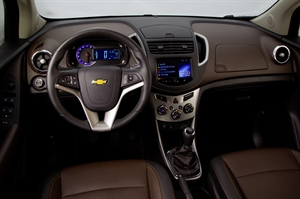 In looks, the Trax does little to differentiate itself from the Mokka, except for the large front double grille, but with its rugged American style design, 18-inch alloy wheels and chunky headlights, the Chevrolet Trax definitely has a presence on the road.

Prices start from £15,495 for the 1.6 LS and £18,945 for the 1.7 VCDi LT diesel. The diesel is expected to be the most popular for fleets because of the amount of standard equipment offered combined with low CO2 emissions at 120g/km.

The ride is hard to judge as Chevrolet has said that the UK will be getting its own chassis tuning, which promises improved handling and steering. If the pre-production model is anything to go by, the Trax is a competent performer but not terribly exciting.

The Trax will not appeal to everyone and Chevrolet has a battle on its hands competing with the likes of the Juke, Skoda Yeti and Peugeot 2008, which are all similarly priced. Some versions offer good value for money considering the standard equipment and interior space, but that comes at the expense of a noisy and pricey diesel engine.

Supermini ticks all the right boses in the budget end of the sector.