""The interior quality of the 308 is a match for most other cars in the sector, although the i-Cockpit design, with lower, smaller, elliptical steering wheel and raised instruments, is often hated by journalists who regularly switch between different types of car."" 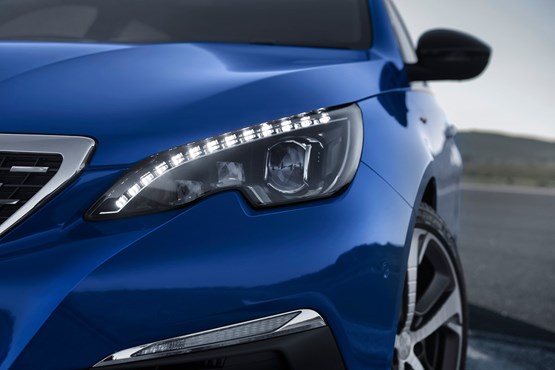 The technology industry moves faster than the automotive world in terms of product lifecycles, and it’s perhaps surprising what Peugeot has now added to the 2014 European Car of the Year to ensure it remains competitive.

Rear ‘claw effect' lights are now standard, while the front and rear bumpers and headlights have been re-shaped to echo the family look of the Peugeot 3008 SUV.

Some versions get new seat trims, while higher grades also come with a panoramic glass roof.

Two new diesel engines are offered, which meet Euro 6c regulations that are introduced from September. Under the new rules, cars are permitted to emit only up to 2.1 times the level of NOx emissions in real world driving as that achieved in lab tests for the official test cycle. Peugeot’s target for Euro 6c will be 1.5 times, and it’s achieved by the latest 180PS 2.0 BlueHDi as well as a new 130PS 1.5 BlueHDi.

Speed limit recognition works via a windscreen-located camera that reads speed limit signs and displays them on the car’s dashboard. Signs for specific vehicles, such as HGVs, are filtered from the information feed. It also prompts the driver when cries control is set at a higher level than a new speed limit, requesting that the new speed limit is matched, and reducing speed automatically if confirmed.

The option of adaptive cruise control with stop function detects vehicles in front of the car and adjusts the speed automatically using the brakes to maintain a safe distance. Blindspot monitoring also alerts the driver to the presence of another vehicle in the blindspot to avoid straying into another vehicle’s path. There’s a smart parking assistance option that can automatically steer the 308 into a parking space.

The interior quality of the 308 is a match for most other cars in the sector, although the i-Cockpit design, with lower, smaller, elliptical steering wheel and raised instruments, is often hated by journalists who regularly switch between different types of car. I’m a fan of the layout, and it makes the steering feel more engaging.

We tried a number of versions of the revised 308, including the new 1.5 BlueHDi, which we expect to be popular with fleets, although Peugeot is still to confirm the important CO2 emissions, fuel consumption and other data for this engine.

It’s a smooth and refined engine, with plenty of punch in the mid-range and an easy-throw six-speed gearshift.

Pricing will be announced in July with first deliveries from September, although we don’t expect there to be much change fom the current line-up.

Verdict: The Peugeot 308 ought to be performing better in the UK than it does, because it had all the right ingredients to compete with the best in class. These mid-life revisions ought to persuade fleets to give it a second look.