"The mainstream seven-seat SUV market is gaining new additions all the time, but the 5008 is distinctive enough to stand out, and capable enough to be desirable. " 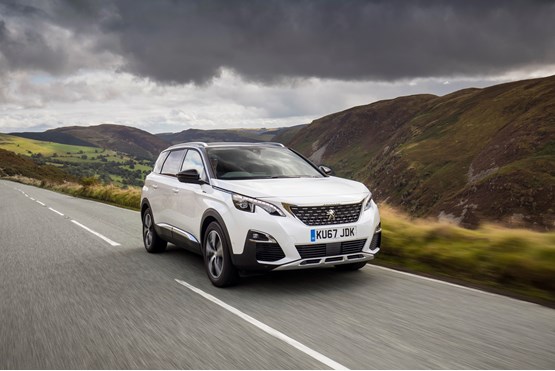 Peugeot has taken radical action to ensure it doesn’t get left behind in the current scramble to sate the public appetite for SUVs, with its 5008 offering.

Last year, the 3008 became more butch and rugged as it moved away from its MPV roots, and now the 5008 – previously a seven-seat MPV – is relaunched as an SUV in its second generation.

Traditional people carrying duties are left to the van-derived Expert Combi and Traveller.

Although similar in styling to the 3008, the 5008 has a longer wheelbase and longer roofline.

Customers in the UK should be able to take delivery of those versions shortly after the 5008 arrives in the UK in January.

Odd perhaps that a new car is launched that has versions that only exist in stock, but the 5008’s engines have been shared with the 3008 and 308, and often there is a lag before right-hand drive production begins.

The petrol engine line-up might be of interest to fleet operators and company car drivers, with low CO2 emissions from the 1.2 PureTech 130PS engine, available with either manual or automatic transmissions.

There is also a 1.6 THP 165PS engine, only available as an automatic.

CO2 emissions start at 106g/km for the diesel versions of the 5008, with the lowest petrol version producing 117g/km.

Dependent on specification and other aspects of running costs, low-mileage drivers might be better off in a PureTech petrol than a diesel, with company car providers also benefitting from lower employers’ National Insurance (NI) costs.

The 5008 comes in four equipment grades, with the entry-level Active offering standard DAB, compatibility with:

Navigation is standard, and includes TomTom Live traffic updates on a three-year subscription.

There are also front parking sensors, as well as rear, and a reverse parking camera.

The GT, only available on the top engine variants, has adaptive cruise control, keyless entry, electric tailgate with proximity-sensing opening, leather seats with electric adjustment and massage function for the driver, and 19-inch wheels.

The interior of the 5008 is surprisingly roomy, even with the second-row seats allowing enough space for passengers behind.

The three individual seats slide forward and back, and each has Isofix points to accommodate a child seat.

Space is a little tighter in the third row, but shouldn’t be a problem for older children and teenagers.

The second- and third-row seats fold flat, while the two seats in the third row can also be removed to allow even greater capacity in the luggage compartment.

There is plenty of room for storage around the cabin, with a deep centre console box and large door bins front and rear, which is a bonus as the glove compartment is tiny.

As with most French cars, the manufacturers absolutely refuse to move the location of the fuse box for right-hand drive models and give British and Irish customers the same level of practicality as for left-hand drive counterparts.

The cabin design and quality are excellent, with Peugeot’s standard digital i-Cockpit a model of clarity.

Most functions are accessed within the dashboard touchscreen, and there are a few buttons below for other features.

We tried the 120PS diesel automatic and the 130PS manual petrol versions, and both are exceptionally refined.

The 120PS diesel has enough power to move the 5008 along well enough, while the auto gearbox is smooth.

The petrol is so quiet, it’s easy to run for too long without changing up – and it wasn’t always possible to say that about a three-cylinder engine.

The mainstream seven-seat SUV market is gaining new additions all the time, but the 5008 is distinctive enough to stand out, and capable enough to be desirable.

Its CO2 emissions will certainly make it attractive as a company car.

Annual service is due, despite covering just 6,000 miles.