"Hyundai believes the best-selling derivative will be the 1.0 T-GDI SE Nav tested here." 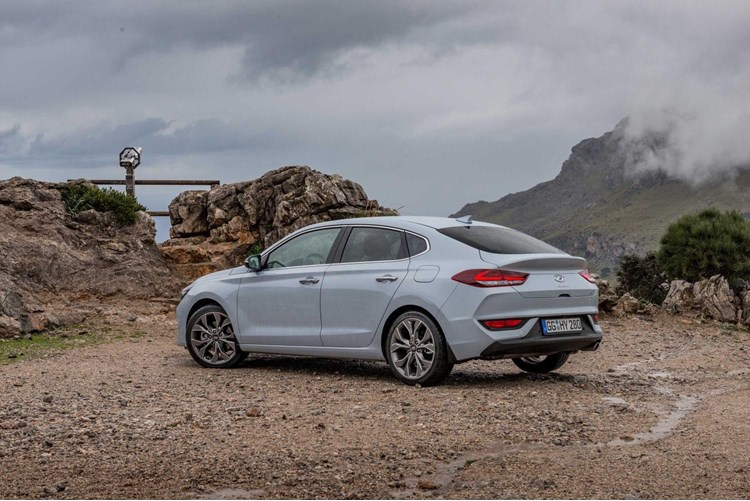 Hyundai i30  Fastback exudes user-chooser appeal over standard hatchback, but is it the best choice for company car drivers?

Hyundai has just launched the fourth variant in the latest i30 range, and it is perhaps the most interesting, if not the most obviously understandable.

The i30 hatchback range was launched this time last year, with the estate arriving in the summer, and hot-hatch i30 N in the autumn.

The Fastback is a five-door, but with an elegant coupé-like profile. It you imagine an Audi A5 Sportback downsized slightly and with framed doors, you won’t be far off.

It’s already on sale, and is currently offered with a choice of 120PS 1.0 T-GDI or 140PS 1.4 T-GDI petrol engines, the latter offered with a seven-speed dual-clutch automatic transmission option.

Diesel will come later in the year, but for now it’s unknown whether the Fastback will have both 136PS and 110PS versions of the 1.6 CRDi engine, although the higher-power motor is a near certainty.

Hyundai believes the best-selling derivative will be the 1.0 T-GDI SE Nav tested here.

The Fastback design is more than a new tailgate. The car is 115mm longer than the hatchback, and 30mm lower. The suspension settings are also 15% stiffer.

Clearly more alluring than a standard hatchback, and promising a more engaging drive, you might be forgiven for wondering why Hyundai chose to launch the hatchback version at all.

It has a bigger boot, with 55 litres more capacity than the hatchback with the rear seats in place at 450 litres, and a similar amount higher up to roof height with them folded.

The cabin in broadly similar to other versions of the car, but this slightly more upmarket variant (there’s a £500 premium over the hatchback) is offered with a unique colour option – merlot red.

The first signs of compromise to style can be found when sitting in the rear, as the lower, tapering roofline results in slightly less rear headroom.

But for people who don’t carry adults in the back regularly, it might well seem to be a price worth paying for the sleeker appearance of the car.

On the road, the ride does feel a little firmer than in the hatchback, but it’s not unduly harsh. Both the three-cylinder 1.0-litre engine and the four-cylinder 1.4-litre offer excellent refinement, with the latter having an edge.

Performance is rather stronger for the 1.4-litre, too, but the penalty for drivers is a higher benefit-in-kind (BIK) tax band – 129g/km for the manual and 125g/km for the DCT.

With elegant styling, the Fastback has more user-chooser appeal than the standard i30 hatchback, but at this point in the Hyundai timeline, it’s doubtful that too many company car drivers would actually decide they want one over other mainstream models or an equivalent car with a premium badge.

The Tucson Plug-In Hybrid sits between mainstream and premium brand SUVs, with competitive running costs in both segments.