"Eschewing modern design means there’s a charm to the Wrangler that makes you smile and attracts attention." 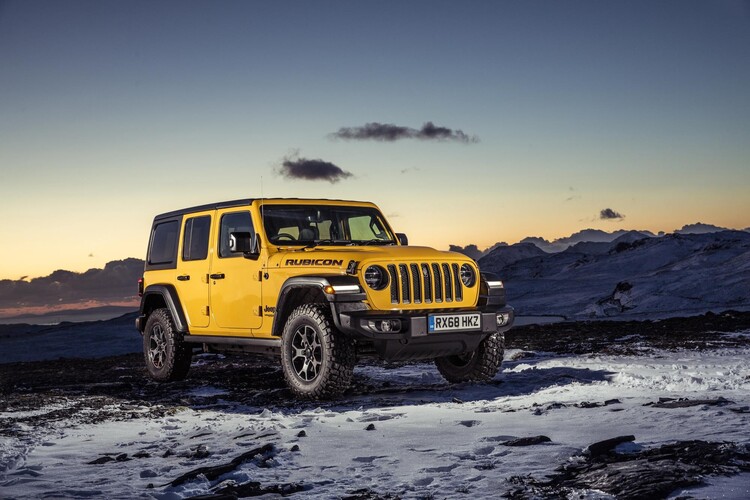 It doesn’t look like the Wrangler has changed much in the 77 years it’s been around in one form or another.

Originally a design solution to the US Army’s need for a lightweight, utilitarian, four-seater vehicle suitable for war zones, the latest model takes some of what made that so useful and brings it bang up to date.

Function still very much dominates form, with a similar boxy profile as previously. Everything appears to have been designed with a ruler, with few curves anywhere. Even the wheel arches are trapezoidal, and each pane of glass is entirely flat.

Eschewing modern design means there’s a charm to the Wrangler that makes you smile and attracts attention, more so in this Rubicon model thanks to the “Punk’n Metallic” paint - or orange to you and me.

For fleet buyers looking for something to cross fields, forests and fells, the Rubicon is the model of choice. While the regular Sahara and Overland models have a comprehensive four-wheel drive system, the Rubicon takes things further. It benefits from heavy duty axles, locking differentials at both ends, and a front anti-roll bar that can be disengaged magnetically to allow for maximum axle articulation. Of course, there’s also huge tyres with knobbly tread on 17-inch wheels that grips mud and sand ferociously. It’s virtually unstoppable on the rough stuff, which will appeal to significant niche.

It’s not quite so capable on tarmac, but improvements from previous models are immense. Steering is still vague, and there’s a sensation that the knobbly tyres aren't always following the direction you’ve commanded, but ride quality noise isolation and comfort are all just about acceptable. The Sahara and Overland models, with their road-focussed tyres, are better.

Switches inside lock and unlock the differentials, disconnect the roll bar, activate hill descent control, and engage two-wheel, four-wheel, or low range drive. They’re joined by some rather more modern looking additions, such as the 8.4-inch infotainment unit that houses the DAB radio, navigation system, and even includes Android Auto and Apple CarPlay. Leather seats, cruise control and climate control give it a somewhat premium feel, while removable roof panels add some open-top joy. Spare 15 minutes or so and you can also remove the doors and fold down the windscreen, although quite where you’ll put the loose items is anyone’s guess; the Wrangler’s boot is tiny in the two-door model, although most will fold the rear seats down to creat a van-like load area.

There’s a 2.2-litre turbo diesel engine to pull the Jeep through whatever is thrown at it, with some 200hp available alongside 450Nm of torque. Performance is surprisingly swift, but it’s all there to plug through mud rather than set quarter mile times. Economy figures suggest 37.7mpg is possible, but that’s rather optimistic. Alongside CO2 emissions of 197g/km, the BIK burden is set at the maximum rate of 37%. The net result is that the Wrangler’s not cheap to run, with deprecation adding to whole life running costs of more than 62ppm.

That might not matter though as there’s currently nothing like the Wrangler on sale. If it meets the very specific needs of your business, then it’s the default choice, and not a bad one at that.