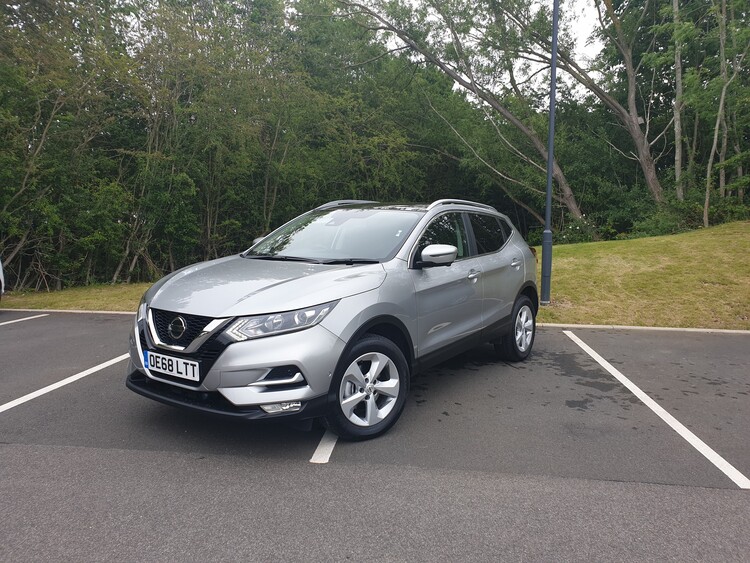 Our six-month stint with the Qashqai has come to an end. During that time, it has been put to the test as a family car thanks to the arrival of my first baby in June.

As a new mum, there were a number of features I liked about the Qashqai – the rear privacy glass meant I didn’t need a sunshade, the keyless entry saved me trying to locate keys in my bag when loaded down with baby paraphernalia and the flexible luggage board system meant I could fit the pram (with carrycot) in the boot and stow some shopping beneath it. I could also flip the boot divider to the smooth side to protect the carpeted side when needed – handy during wet weather.

However, I did find the Qashqai’s boot to be small compared with rival cars. It offers 430 litres, which is nearly 100l fewer than the Škoda Karoq’s 521l, for instance.

On the road, the Qashqai proved quiet and comfortable and it was easy to build speed with the new 1.3-litre petrol engine. The majority of my trips were short which meant the fuel economy tended to hover around the 40mpg mark (more than 10mpg below the official combined figure of 53.2mpg). However, on longer runs, this did rise to around 48mpg. The best was 50mpg on a 44-mile Peterborough-Cambridge trip.

I appreciated the Qashqai’s safety technology, particularly the rear cross traffic alert and moving object detection, and the Intelligent Around View Monitor system which gave a 360-degree bird’s eye view around the car. 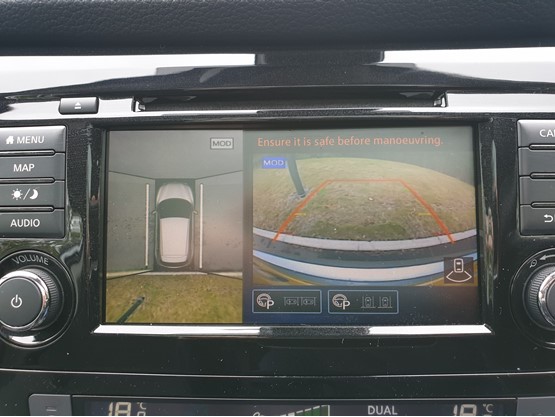 However, I had a love-hate relationship with the sat-nav. I hated its annoying warning message whenever I went on a road with ‘restricted access’ but was impressed by how accurate its predicted arrival time was thanks to TomTom Premium Traffic (a feature of the new Nissan Connect infotainment system).

Overall, the Qashqai proved why it is still a good choice for fleets although it is no longer a standout car in the crowded crossover segment.

Is boot up to ultimate family test? - November 2019

Becoming a mum for the first time recently has meant a car’s boot space is a lot more important than it used to be. In the past, all that mattered was that it was big enough to cope with some shopping, gym gear or a few suitcases. Now, the crucial factor is whether the pram fits (without taking the wheels off). Thankfully, in the Qashqai, it does.

I’ve been making use of Nissan’s flexible luggage board system, which allows for shelves and dividers to be used in a number of configurations – Nissan claims 18, but I’ve only managed a few. 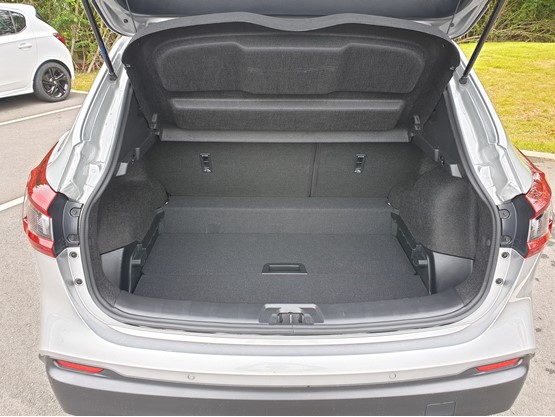 Despite the clever configurations I’m not sure how the Qashqai would cope with the ultimate boot test – the family holiday. It has a carrying capacity of 430 litres which increases to 1,585 litres when the 60:40 split rear seats are folded flat. Not bad, but not as good as some rivals. The Škoda Karoq, for instance, offers 521 litres and 1,630 litres respectively, while the Vauxhall Grandland X has 514 litres and 1,652 litres.

I’ve also found that with two people – plus baby in a car seat – in the rear, the Qashqai is a tight squeeze and not comfortable on long journeys.

The Qashqai’s new 1.3-litre petrol engine, which replaced the 1.2-litre and 1.6-litre units last October and was developed in collaboration with Daimler, is proving popular with fleets.

Year-to-date fleet sales of the Qashqai are in the diesel’s favour (14,059 versus 13,765, as at September) but it’s a different story looking at September alone.

A year ago, just prior to the new petrol engine’s launch, it was the diesel which was more popular (2,123 fleet sales versus 1,911).

But is petrol really the best choice for company car drivers and fleet managers?

Pitting our 140PS version against the 115PS 1.5-litre diesel, using the company car tax calculator on the Fleet News website, over four years and 80,000 miles brings up some interesting numbers.

Service, maintenance and repair (SMR) costs are also a fraction lower in the petrol (3.76ppm versus 3.85ppm).

However, there is, unsurprisingly, a greater difference in the diesel’s favour for fuel costs. It costs 2.66ppm (£2,128 over 80,000 miles) more to be in the petrol rather than the diesel.

This highlights the importance of considering how many miles a company car driver does to determine the best option.

I’ve clocked up only about 2,000 miles since taking delivery of the Qashqai in June, making the petrol engine a better choice for me than the 1.5-litre or 1.7-litre diesel units.

“Caution! Road with restricted access.” That warning has been coming out of the Qashqai’s speakers far too frequently. It has been telling me each time I turn into my estate or enter the office car park or shop at a certain supermarket.

At first, there was no apparent way to silence it – even with the sat-nav and infotainment system turned off. But, thankfully, I have now found an option buried in the guidance settings which does the trick.

The sat-nav is otherwise reliable and its predicted times of arrival has proved spot on thanks to TomTom Premium Traffic, which is a feature of the new NissanConnect system. 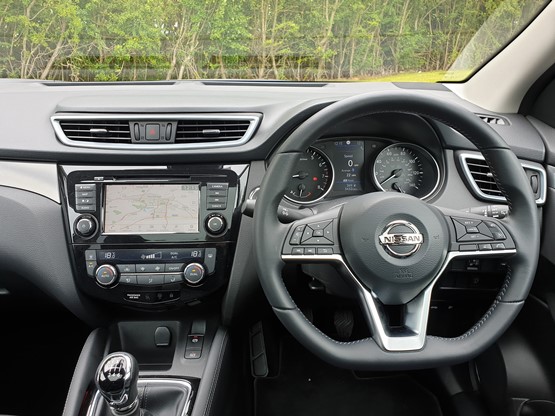 Despite the upgraded system, the interface looks dated, especially compared with rival models from the Volkswagen Group.

On a positive note, Apple CarPlay and Android Auto are now included (Acenta grade and above) and there is a wealth of other standard technology on our N-Connecta model.

How do the Qashqai's wholelife costs stack up? - August 2019

The Nissan Qashqai is one of the most popular SUVs, but it faces fierce competition from a host of rivals when looking at wholelife costs.

So, on paper, the Karoq is the best bet. But what is it like to live with? Read our long-term review.

This is my second stint in a Nissan Qashqai. The first was back in 2008 when I joined the Fleet News editorial team. The Qashqai had launched the year before and it was an interesting car to have on long-term test as there was nothing else quite like it – it was the car that spawned the crossover sector.

Some road testers at the time were critical as they felt it wasn’t an MPV and it wasn’t quite an SUV and therefore it ‘didn’t know what it was’. But the judges of the Fleet News Awards were impressed with its distinctiveness, running costs and technology, and voted it the best small family car that year.

Today, the Qashqai is firmly established as one of the best selling cars in the UK (with total year to date sales of 29,180 in June, two-thirds of which were true fleet). 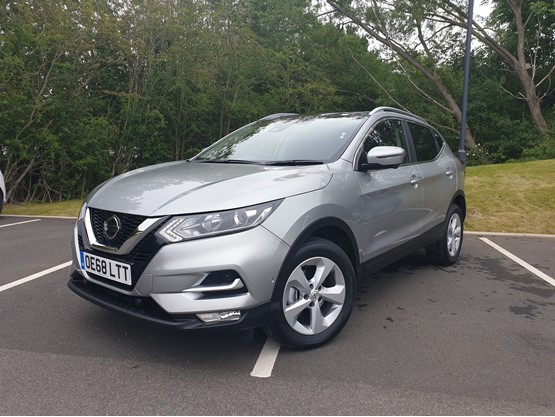 But because so many are sold now and there are so many other crossover/compact SUV cars on the market the Qashqai has lost its distinctiveness. In fact, I’d go so far as to say that the latest version we’re testing (which was facelifted in 2017) is ‘run of the mill’.

What’s most interesting now is not its looks but what’s under the bonnet – a 1.3-litre petrol engine which has been developed under the Renault-Nissan Alliance and Daimler partnership and became available on the Qashqai last year.

Back in 2008, it was the 1.5-litre diesel I tested and the fact we’re now in a petrol is another sign of how things have moved on in the market.