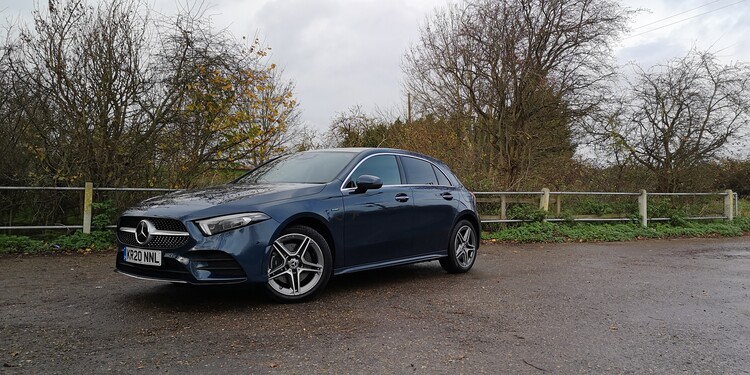 Sadly, after six short months, our time with the A-Class has come to an end. My return to the premium-plus model was all too short after it had been returned to me following a brief car swap with Andrew Ryan when I drove the Mazda MX-30.

The A250e’s return really has highlighted to me the quality, driveability and power of the more expensive A-Class.

While I had mainly used the petrol engine during my time with the car, Andrew, who has a home charger, was able to benefit from the all-electric range (recording around 35 miles) which, had I been working in the office, would have been an advantage as I would have been able to travel to work and back on a single charge gained at the office car park.

Interestingly, while Andrew enjoyed the ‘massive blue arrows’ on the sat-nav screen, I found them distracting and difficult to read. Different strokes.

I have enjoyed the power and driveability, but mostly the upmarket feel of the cabin, with sports seats, customisable dash and interior lighting, high-end fabrics and piano black and aluminium detailing it’s certainly a nice place to spend time.

A hot hatch in disguise?

The Mercedes A 250 e looks great and drives well, with a decent balance between sportiness and comfort. It can cover about 35 miles on its battery alone, although this dropped to high 20s in the colder weather, before switching over to the 1.3-litre petrol engine.

There's obvious way to switch to a combined powertrain other than accelerating hard, in which case the petrol kicks in to provide extra power. In those moments there is a hesitancy compared with using electricity alone as the engine kicks in and the gearbox adjusts.

But, when the surge of acceleration comes, it is a decent amount of shove, putting the A Class into hot-hatch territory.

For most of the time the electric-only range has been ample and, with a 7kW home charger, running the A-Class has been enormously convenient, taking just more than two hours to charge the 15.6kW battery.

My time with it has coincided with a number of long journeys, meaning I’ve been running on petrol-only for extended periods, with the typical miles per gallon reading being in the low- to mid-40s.

The frequency of filling up with petrol seemed to come around pretty quickly and a look at the technical specifications showed why: its fuel tank is 35 litres, eight litres smaller than those in its petrol and diesel siblings.

The longer journeys also highlighted a really nice feature of its built-in sat-nav. I tend to use Google Maps as I connect Android Auto so I can listen to podcasts but, because I had forgotten to bring along the right USB cable, I had to turn to the car’s MBUX system instead.

I was surprisingly thrilled when I found that when approaching a roundabout or a junction where you need to turn off, the car’s infotainment screen switches to images from the front camera and massive blue arrows appear on the screen pointing to where you need to go.

As someone with a tendency to misread sat-nav directions and end up taking the wrong turning, this came as an amazing revelation.

Is it the best PHEV hatch?

Three of the A250e’s closest hot hatch hybrid rivals are the Volkswagen Golf GTE, Cupra Leon eHybrid and the Audi A3 40 TFSie. All are within £1,500 of each other with the Golf being the most expensive at £37,555, followed by the A-Class at £37,425. All have relatively small petrol engines but all offer more than 200PS.

The current A-Class has an up-market, sporty look that’s a far cry from the tall, MPV-esque A-Class of old.

This third generation car is aimed squarely at the top end of the premium hatchback market. It’s a stylish car with a high end interior and a lot of clever tech and, on those points alone, certainly holds its own against premium rivals including the BMW 1 Series and Audi A3. But, what is it like for practicality?

At 310/1,125 litres the boot space is smaller than a petrol- or diesel-engined A-Class, and that, coupled with the two fairly sizeable bags which contain both the fast-charging and conventional three-pin charging leads that live in the boot (built-in storage for these would have been a big plus point) the bootspace is slightly awkward.

Front passengers get most of the attention with plenty of leg room. The seats are fully electric, heated, adjustable and programmable. There is even a ‘kinetic’ setting which uses the electric motors in the seats to create small movements in the seat base and backrest every few seconds to help relieve any aches that might build up on longer journeys. 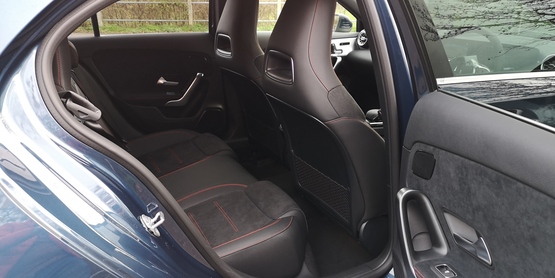 In the rear, there is no tech or adjustability. Head and leg room in the back are ample for younger kids and passable for adults. Six footers may find the restricted knee room tiresome on longer journeys and, while there is a centre seat in the back, it’s raised and narrow. Storage-wise, the A-Class fares ok. In the front there’s a big central storage compartment between the seats with built-in charge points and two cup holders plus a phone-sized space in front of the touchpad. The front door pockets are large enough for a drinks bottle. Rear passengers get small door pockets, two cupholders built into a central armrest, two charge points and two air vents.

One of the things I love most about this model from a practicality point of view is the one-touch ‘off’ button. Hitting the start/stop button not only turns the car off, but also puts it in ‘park’ and applies the handbrake.

Is PHEV the perfect stepping stone to EV?

With the Government’s announcement last year to ban the sale of new fossil fuel vehicles by 2030, electric and hybrid vehicles are a hot topic.

Of course, both have been around for some time now, but with PHEVs accounting for the majority of our long-termer fleet, the direction – and speed – of change is clear.

For most though, an alternatively fuelled vehicle is still unfamiliar ground. A hybrid is a perfect stepping stone for those with range anxiety. But, with current lockdown restrictions and a lack of a fast charger at home, the A class has spent the majority of its time using petrol power from the small 1,332cc engine.

However, even with zero electric miles showing in the ‘tank’, low speed manoeuvres such as crawling in traffic can still be performed without the use of the petrol engine.

It also continues to use the electric power to assist the petrol engine with a grin-inducing turn of speed when needed. The petrol engine is both quiet and refined and is returning a respectable average of 41.5mpg.

Nowadays there are mobile apps for everything and more and more manufacturers are providing companion apps for their latest models. Mercedes-Benz is no exception with the Mercedes Me app.

The app requires registration and linking to your vehicle using the vehicle’s VIN and registration plate along with your personal details.

It provides useful information such as electric range and charging status, remaining fuel and trip data. The app also includes a doors lock/unlock function and the ability to remotely open and close the roof which I have yet to find a use for.

The car’s location is shown on a map within the app and includes the facility to flash the lights which could come in useful in a large car park.

One of the most useful features is the ability to set the interior temperature including the heated seats by departure time which is especially useful during the colder months.

It’s worth noting that this function does require charge in the high voltage battery, or the car to be plugged in.

Plug-in hybrids are a cross between an internal combustion engine (ICE) and an electric motor, meaning you have the option to drive electric-only on short city trips, or use the ICE (petrol or diesel) for longer journeys.

You have to plug in your car to charge the battery, but if you run out of juice the car will simply switch to the ICE which removes any range anxiety associated with fully-electric vehicles.

Another noticeable difference in plug-in hybrid cars is the responsiveness – the electric motor boosts the combustion engine under acceleration for smoother, more instant power. 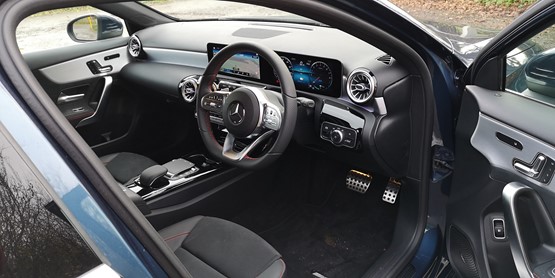 The hybrid powertrain offers significant benefits to businesses and employees including 6% BIK, annual VED of £0 then £140, £310 Class 1A NICs and an overall running cost figure of 40.79ppm – around 7ppm cheaper than its equivalent ICE counterpart.

First impressions are positive, the cabin is luxurious with high quality materials throughout. However, due to a period of self-isolation, I have yet to fully enjoy all the A 250 e has to offer.