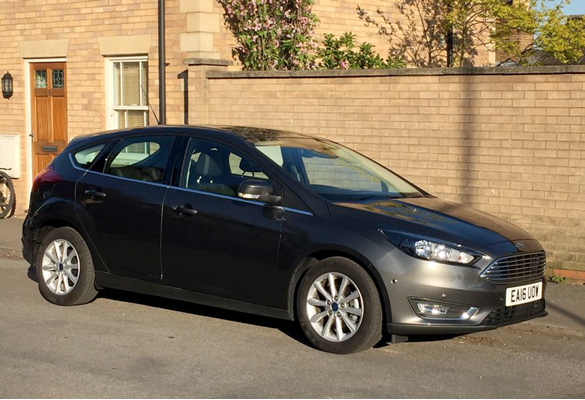 The Ford Focus has consistently been one of the best-selling cars in the fleet sector since its launch.

Much of this is due to the financial appeal of the range to companies, but the 10 months we’ve spent with a 1.5 TDCi Titanium hatchback has shown that the car has plenty of appeal for a driver, too.

Our test model has now returned to Ford, but over the 13,192 miles it covered while with us it proved to be a largely practical, hassle-free and efficient hatchback, often returning around 60mpg per tank of diesel.

This compares to a combined cycle fuel economy of 74.3mpg from the official NEDC tests, which also gave the Focus a CO2 emissions figure of 99g/km.

These emissions put it in the 19% benefit-in-kind (BIK) tax band, meaning a 20% taxpayer currently faces a monthly bill of £70. Though this will change next month.

It is also exempt from VED.

However, while the Focus’s efficiency makes it economical to run, it doesn’t impair the enjoyment of driving it.

It offers a decent level of refinement, a comfortable ride and is an engaging drive, while the 120PS engine provides punchy performance, making the car adept at both urban and motorway journeys.

The cabin is well-designed, too, with the infotainment system both capable and straightforward to operate.

However, I found the optional leather seats too hard to begin with, while passengers had complained rear legroom was tight.

Despite those minor niggles, our ownership experience proved to be largely hassle-free, with no reliability or build quality issues.

Overall, the Focus is an impressive all-rounder and its position as one of the best-sellers in the fleet sector is well deserved.

I don’t think the novelty of having a car with self-parking technology will ever wear off for me: I’m still amused by the ability to sit back and watch the steering wheel whizz round as the car guides itself into a space.

Fortunately, our long-term Ford Focus is fitted with the optional convenience pack (£450), which includes parallel, perpendicular and park out assist, as well as front and rear parking sensors.

Operation of both the parallel and perpendicular parking facility is straightforward. Press the parking button near the handbrake until you get to the right option, put the indicators on for the side you wish to park on, and drive forwards until the system finds an appropriate space.

When it finds a suitable gap, the system alerts you and issues on-screen instructions which tell you to drive forwards or backwards while the car steers itself into the space.

I’ve found the system works brilliantly for parallel parking. However, I have had some issues with the perpendicular parking system.

I seem to have little or no control over what space it parks me in. On one occasion it repeatedly tried to park me in a trolley bay in a Tesco car park.

After the first time it did this, I cancelled it, drove 20 yards up the road past another suitable-looking space and tried again, only for the car to take me back to the trolley bay.

I gave the system one more chance but another failed attempt led me to over-ride the system and park the car myself.

Our Ford Focus long-termer was given the chance to stretch its legs with a 650-mile round trip to Ireland for a weekend with family.

Loaded up with my parents and gifts, the hatchback proved to be an ideal companion for the journey from my point of view: it was quiet, comfortable and efficient, reporting an average fuel economy of 60.1mpg.

The 120PS 1.5 TDCi engine produces plenty of power too, while the safety equipment fitted helped make the journey hassle-free.

However, my rear seat passenger was less impressed, saying that it felt cramped there. As a result, I tried the rear seats out and, having recently ridden in the back of a Vauxhall Astra, found it to be less spacious than its key fleet rival.

The Focus suffers in the cargo carrying stakes, too. We didn’t take any particularly large presents with us, but it was a squeeze to fit both them and our luggage into the boot.

After seven months in the Ford Focus, I will shortly be handing the keys to a colleague and taking the Mini Clubman on long-term test.

During the 7,000-plus miles clocked up on the Focus it has proved enjoyable to drive and reliable, bar a few technology inconsistences.

The traffic sign recognition feature (available as part of a £350 Driver Assistance Pack) generally identifies the correct speed limit but there are certain roads where it flashes up 10mph instead of the posted 30mph, and displays 60mph in a 50mph. When passing a European HGV with a speed limit on the back it reads it as a sign and displays the speed limit in km/h.

However, other optional technology, such as the blind spot monitoring system and cross traffic alert (which warns you if another car is coming when you are reversing), have proved useful. Active city stop (which helps prevent low speed rear end shunts, and can be useful for insurance purposes) and rear parking sensors are standard.

Fuel economy has generally been around 60mpg, with the current average 58.9mpg, making it around 10mpg below the official combined figure (70.6mpg).

According to our Focus I am now an ‘eco champion’, with a five-petal rating for gear shifting, anticipation and speed. I haven’t been driving in a particularly eco-friendly manner, instead simply sticking to speed limits and, most of the time, following the gear shift indicator.

Despite my eco champion status, a colleague has achieved better mpg than I have in the Focus (65mpg while I am averaging 60.9mpg) even though he dropped a few petals. The higher mpg may be down to journey type with him putting the Focus to the test on longer motorway journeys. He is also a fan of the Focus’s adaptive cruise control (a £550 option on our test model), which could help achieve better mpg if set at 60mph on the motorway.

However, we have discovered that the trip computer appears to be overestimating by 9mpg, meaning that we are actually averaging in the 50s rather than 60s.

Our views differ on the sat-nav (a £300 option). My colleague didn’t find it user-friendly, particularly when inputting addresses, and preferred to use the Sync voice commands, while I favour the touchscreen. We also differ over the chimes which sound when it is time for you to take an exit on a roundabout or leave a junction. He chose to switch them off, while I find them useful. On two occasions the sat-nav has not recognised a postcode and neither have been obscure locations – one was the Leicester Forest East Services on the M1 and the other was the train station carpark in St Albans.

So the jury is still out on whether the sat-nav is a good option or not.

Our long-term Focus is fitted with a number of safety and convenience features, some of which are standard (such as Active City Stop and rear parking sensors) and some are in an option pack.

The Active City Stop, which is designed to avoid or mitigate low-speed collisions, is arguably too ‘active’. When I drove into a car parking space recently it came on – to avoid me hitting a hedge. No, I was not driving at the hedge at speed. But I was obviously too close to it for the car’s liking. At least I know the technology works.

I have also found that Parallel Assist (fitted as part of a £450 convenience pack) is not foolproof. On one occasion it took the nearside back wheel up the kerb. This perhaps illustrates the point that some fleets make about technology: drivers can become too reliant on it – I could perhaps have intervened, but I trusted the technology.

These are only two minor incidents, and the technology has otherwise proved excellent.

The blind spot monitoring system and cross traffic alert (which warns you if another car is coming when you are reversing) are particularly useful (yes I am still checking over my shoulder).

After saying goodbye to the Mondeo, we’ve welcomed another Ford fleet staple to our test selection: the Focus.

We’ve opted for the 1.5-litre diesel in Titanium trim, which has CO2 emissions of 99g/km and a combined fuel economy of 74.3mpg.

I’ve clocked up around 1,000 miles in the Focus over the past four weeks and I’m slightly disappointed to report that my average fuel economy is 18mpg below the official figure at 56mpg.

My driving style isn’t the cause of the mediocre return – at least not if Ford’s eco mode data is to be believed. The system assesses how eco-friendly your driving is, based on gearshifts, anticipation and speed, and gives a score for each in the form of petals on a flower (similar to Honda’s eco guide). It rates my anticipation and speed as five ‘petals’ each (the maximum rating), while my gear-changing gets four.

Over the next month I’ll be monitoring how the Focus’s mpg fares on longer journeys, and whether following the gear shift indicator more closely results in five petals.

Fuel economy aside, the Focus has made a good first impression. It handles well and is as good a drive as the Golf GTD we had on long-term test last year – minus the sporty exhaust note. The interior is smart with blue-lit instruments and leather seats (at £1,150 extra), while active city stop, which helps prevent low speed rear end shunts, and rear parking sensors are standard.

Blind spot monitoring is not included in the packs and costs £525. We’ve also added a rear view camera (£250) and adaptive cruise control (£550).

It provides useful information such as electric range and charging status, remaining fuel and trip data.