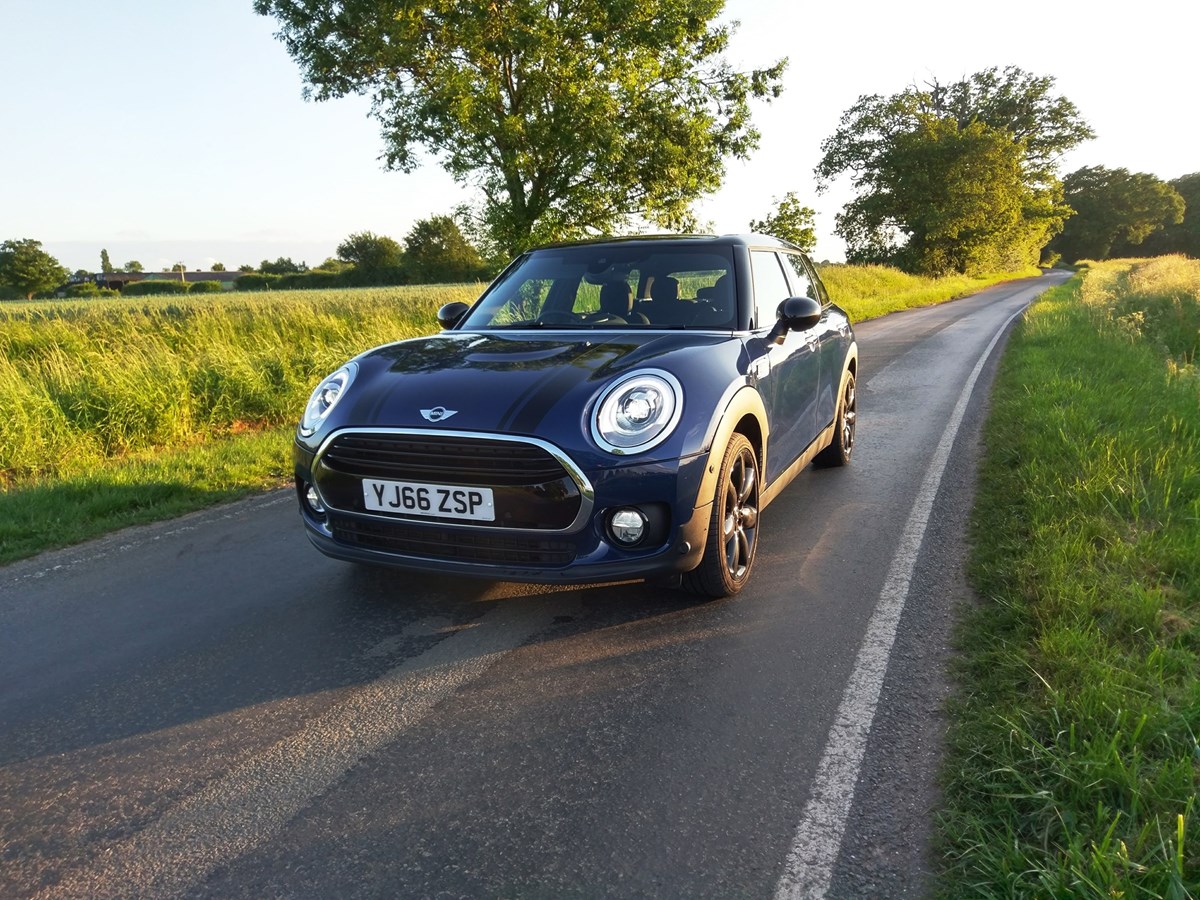 That’s purely due to the Clubman’s split rear doors. Looks-wise they make the Clubman stand out but the downside is they restrict the driver’s view in the interior mirror.

I also found I prefer to load and unload with a traditional boot lid.

If I had children or needed to carry more than the weekly supermarket shop, though, I would probably have favoured the extra space the Clubman offers (a 360-litre boot compared to 278 litres, plus an extra 270mm in length and 73mm width).

Both cars have the Mini’s funky interior touches such as the toggle switches and LED ring around the centre instrument binnacle which changes colour in response to doing things like altering the temperature or music volume.

There are other clever lighting features in the Clubman such as the Mini logo being projected onto the ground when you unlock the car using the remote key, and the ability to change the interior lighting colour.

There are plenty of safety and convenience features, too, such as autonomous emergency braking, park assist and ‘Easy Opener’ to open the boot by waving your foot beneath the bumper (although that can be inconsistent).

The Clubman has proved fun to drive despite its larger size. There’s a noticeable difference in responsiveness between the three driving modes (‘green’, ‘mid’ and ‘sport’), which are available as part of Mini’s popular Chili Pack (£2,785).

I did most of my 6,000-plus miles in ‘mid’ mode as the car defaults to this at the start of every journey; you have to remember to flick the rotary switch at the base of the gear stick to select a different mode.

Despite being in ‘mid’ rather than ‘eco’ the fuel economy averaged 52.1mpg (13.6mpg below the official combined figure).

The Mini Clubman’s most distinctive feature is its split rear doors. They might be popular with Austin Mini fans but I still prefer a traditional boot lid. In a crowded supermarket car park I often have to open one door and put the trolley next to the closed door to load the boot, which isn’t ideal.

Our Clubman has a number of handy options, including a through-loading system (£200), allowing a 40:20:40 configuration on the rear bench and a luggage compartment separating net (£155) to stop items sliding forward. It also has a variable boot floor (which is included in our Chili pack or as a separate storage compartment pack option for £210).

Shame about those doors.

Touchscreens are becoming increasingly popular in new cars (my previous long-term test cars, the Ford Focus and Volkswagen Tiguan, both had them), and now Mini has got in on the act.

Its optional Media Pack XL has been revamped to include an 8.8-inch touchscreen instead of an 8.8-inch screen and controller, and is available on the Clubman and Countryman for £950.

We took delivery of the Clubman before this pack became available and when a colleague tested the Clubman he wasn’t a fan of the controller system (which is a version of parent company BMW’s iDrive infotainment) due to the number of stages you have to go through to get to certain options. For him, the new touchscreen, which also has a new user interface, should be favoured.

However, I have no complaints about selecting options having become accustomed to iDrive in our previous Mini (the five-door hatch).

My only gripe is that the edge of the screen on the right is obscured by the central LED ring. This isn’t a problem for most functions but when using the sat-nav it means a small part of the map (or the directions when using the split-screen) is hidden.

That minor point aside, I continue to enjoy driving the Mini. Shifting between gears was awkward at first as the gearstick seemed stiff but it has eased over time.

I’m also been pleased to note that switching to ‘sport’ mode rather than ’mid’ for my daily commute hasn’t resulted in a drop in fuel economy, although using ‘eco’ mode gives the best part of another 3mpg (51mpg rather than 48.3mpg).

Choosing a Mini is often a ‘heart’ rather than a ‘head’ decision – it’s a brand drivers become attached to – but to make it onto choice lists the financial case still needs to stack up.

It might not be the financial frontrunner but the Clubman is worth considering if there is driver demand.

Our Mini Clubman has a feature called ‘Easy Opener’ which allows you to open the rear doors by waving your foot below the bumper.

This sounds great, and the first time I tried it, loaded down with bags, I was impressed. After the lights flashed, the doors opened, one at a time, leaving me free to load up.

However, on another occasion it failed to respond to my foot waving, causing a few odd looks from colleagues standing nearby.

The keyless entry for the driver’s door is more reliable. Our last Mini long-termer didn’t have this and I’ve been reminded how useful it is.

I’ve also tried out the ‘eco’ driving mode, which is one of three available (the others are ‘mid’ and ‘sport’), and found it made a difference of 1mpg on a 65-mile trip. I didn’t stick rigidly to the eco tips on the dash, which suggested I drop my speed to 50mph rather 70mph on the motorway.

Mini has increased its dimensions so it is now pitched against the Audi A3, Mercedes-Benz A-Class and Volkswagen Golf.

An entry-level Clubman One D was launched earlier this year with CO2 emissions of 99g/km. However, we’re testing the Cooper D, which is the most popular Clubman with fleets.

Two equipment packs have also been added to our long-termer: the Media Pack (£950), which features an upgraded sat-nav system with a larger 8.8-inch screen, Bluetooth and Mini Connected XL (allowing the driver to connect their smartphone to get social feeds, online music, in-car apps, and driving information), and the Chili Pack (£2,785), which includes heated sports seats, LED headlights and foglights, automatic air-conditioning, and driving modes (‘green’, ‘mid’ and ‘sport’).

Chili is Mini’s most popular equipment pack and, although pricey at first glance, it saves £1,300 compared with selecting the options individually.

In typical Mini fashion our Clubman features funky interior lighting with illuminated door bezels and an LED ring around the circular instrument, which glows different colours in response to doing things like altering the temperature or music volume – I became accustomed to this feature in the five-door hatch.

I did, however, get a surprise the first time I opened the driver’s door: the Mini logo is projected onto the ground thanks to puddle lamps shining from beneath the door mirror.

The Mini’s ride is much firmer than my previous long-termer, the Ford Focus, and the gear stick has proved stiff but this may loosen up with more miles on the clock.