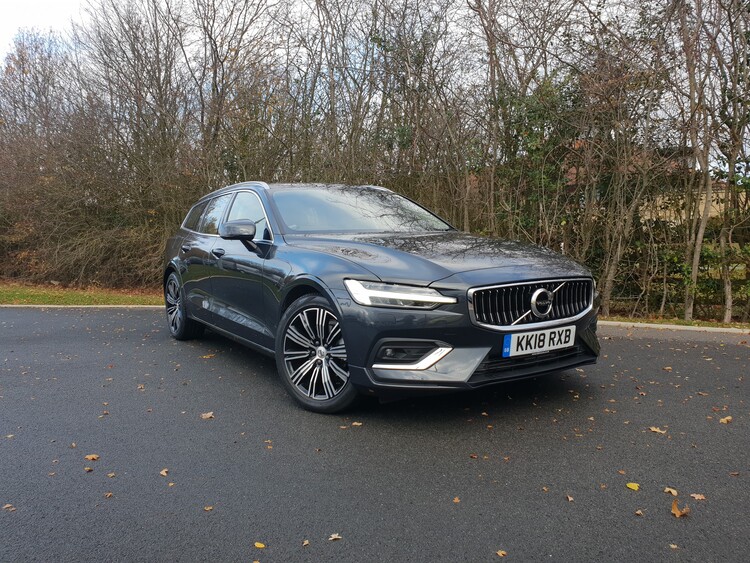 It is hard to find fault with the Volvo V60 as it bids farewell to the Fleet News long-term test fleet.

The Swedish carmaker has left no stone unturned in its desire to produce one of the safest cars on the road, while also delivering the right mix of performance and practicality.

It is therefore no surprise to see how it is fast becoming a popular choice among UK fleets; the mid-size estate was launched a year ago with company car drivers firmly in its sights.

The Intellisafe Pro Pack (£1,625), which adds semi-autonomous drive features through pilot assist, supports the driver with steering, acceleration and braking on well-marked roads up to 80mph, gave us a glimpse of a self-driving future, while cross traffic alert could prove annoying. It could slam on the V60’s brakes despite being somewhat clear of any danger.

However, after six months of testing, we are really nit-picking; the Volvo V60 has already gained traction in the fleet market and, with the imminent arrival of a plug-in hybrid version, its popularity looks set to continue.

A windscreen replacement on the Volvo V60 was a timely reminder of the myriad of safety features available on this car.

Once the glass had been replaced, the car had to be recalibrated to ensure the camera, radar and sensors positioned near the rear view mirror were all working correctly.

Volvo argues that this process should only be carried out by its technicians and you can understand why when so many features are reliant on its accuracy.

The City Safety with Autobrake technology, for example, uses automatic braking and detection systems to assist the driver in avoiding potential collisions, and is the only system on the market to recognise pedestrians, cyclists and large animals, including moose and elks, says Volvo.

And, in a world first, its City Safety system now also engages autobraking to mitigate oncoming collisions. If the car drifts over a lane marking, heading into the path of an oncoming vehicle, and the driver takes no action, the system automatically steers the car back into its own lane.

Meanwhile, its Pilot Assist system, which is standard in the V90, but optional for the V60, supports the driver with steering, acceleration and braking on well-marked roads up to 80mph.

When Pilot Assist is activated, acceleration, braking and steering assistance helps the driver follow traffic flow within the current lane.

The system also enhances speed and distance control and achieves a consistent position in the centre of the lane.

The driver can override the system at any time by using the brake pedal, accelerator pedal or steering wheel. Using the turn indicator will temporarily abort the steering support if the driver wants to change lane.

Pilot Assist alarms and automatically also switches off if the driver does not keep a hand on the steering wheel.

Oncoming lane mitigation helps the driver avoid collisions with oncoming vehicles by assisting with steering back into the correct lane.

When a potential run-off road situation arises, torque can be applied to the steering to support the driver, along with braking action.

The Run-off Road Mitigation system uses input from the car’s advanced sensor system to detect a run-off road scenario. When a run-off road situation is unavoidable, the front safety belts automatically tighten to keep the occupants in position. This feature is standard in the V90 and optional the V60 Series.

Despite the rapid rise in SUV registrations, the executive estate sector is proving a worthy alternative for fleets looking for a mix of performance and practicality.

Our Volvo V60 D3 Inscription is a prime example, with ride and handling matched by a boot that also compares well to its rivals.

The V60 is the fifth model based on Volvo’s Scalable Product Architecture (SPA) platform, after the larger S90, V90, XC60 and XC90. This has allowed it to significantly increase the interior space on offer.

It is 13cm longer than its predecessor and offers 100 litres more boot space, with a squarer back end to increase practicality.

There are 529 litres with the rear seats in place, while dropping the rear seats gives you 1,441 litres and creates a flat floor level. Each model also comes with a power-operated tailgate. 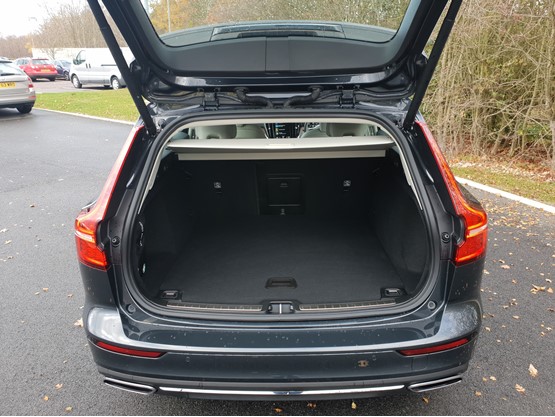 That compares well to the Mercedes-Benz C-Class estate, which has a smaller 460-litre boot with the seats up. However, dropping them down will give your more space than the V60, with 1,480 litres available.

Volvo offers a choice of three 2.0-litre, four-cylinder engines – D3 and D4 diesels, and a T5 petrol. Two petrol-electric plug-in twin engine hybrids (T6 and T8) and a second petrol engine are expected to be added to the line-up shortly.

Emissions start from an attractive 117g/km for the D3 and D4 diesel Momentum models, equating to 64.2mpg combined. Our test model has been achieving 40-45mpg.

CO2 emissions for the Volvo V60’s two diesel powertrains are giving company car drivers the choice of 26% more power for less than £5 extra in tax per month.

However, with P11D prices virtually identical and emissions of both engines on a par, figures from the Fleet News Company Car Tax Calculator show how little extra the more powerful powertrain will cost.

The Fleet News Company Car Tax Calculator also shows that residual values for D3 and D4 powertrains are closely matched, with each retaining around 31% of their value after four years and 80,000 miles.

It all adds up to putting the D4 in prime position when considering it against the less powerful D3, despite Volvo expecting the D3 to be more popular among company car drivers.

Think Volvo and safety comes immediately to mind, and the new V60 goes some way to reinforcing Volvo Cars’ standing as the industry leader.

Like the new S60 sedan, the V60 estate received the maximum five-star rating in their 2018 EuroNCAP safety tests, continuing a five-star streak for the Volvo line-up. From the compact V40 hatchback to the large XC90 SUV, all tested Volvo models currently on sale offer five-star-rated safety technology.

Even more impressive, when the 2018 Euro NCAP testing regime was the toughest ever, with new and more demanding challenges on safety technology, including cyclist detection with auto-brake and emergency lane keeping systems, the V60 was among the safest cars tested under the new regime.

A host of safety features come as standard on the V60, including advanced driver-support systems known from the 90 series and XC60.

Its City Safety system, which now also uses autobraking to mitigate potential oncoming collisions, is the only system on the market to recognise pedestrians, cyclists and, according to Volvo, large animals.

Our test car, the D3 Inscription, a 2.0-litre diesel, also has the Intellisafe Pro Pack fitted at a cost of £1,625, which adds semi-autonomous drive features through Pilot Assist, as well as blind spot monitoring and cross traffic alert.

The Pilot Assist system, which supports the driver with steering, acceleration and braking on well-marked roads up to 80 mph, gives you a glimpse of a self-driving future and has been upgraded to improve cornering performance.

Emissions start from an attractive 117g/km, from a choice of four 2.0-litre, four-cylinder engines – D3 and D4 diesels, and T4 and T5 petrols. A new T8 plug-in hybrid is also now available to order, shortly to be joined by a T6 version.

The plug-in promises 135mpg and CO2 emissions of 48g/km (WLTP), with a zero emissions range when fully charged of about 30 miles.

Our test car, the D3 Inscription, a 2.0-litre diesel, also has the Intellisafe Pro Pack fitted at a cost of £1,625, which adds semi-autonomous drive features through Pilot Assist, as well as blind spot monitoring and cross traffic alert.

It assists with the steering, up to motorway speeds and controls the acceleration and braking required to keep the car safely within lane markings, and at the desired cruising speed or distance from any vehicle in front. It’s an important step in the road to full autonomy and will be interesting to gauge during its time on test.

Both Momentum and Inscription versions are also available in highly specified Pro form, which includes head-up display, hands-free opening for the powered tailgate, and heated front seats and a heated steering wheel. Inscription Pro gets these, along with Nappa soft leather upholstery, ventilated front seats and 19” alloy wheels.

First impressions have been good, with the V60’s 526-litre boot proving its worth during a recent house move.