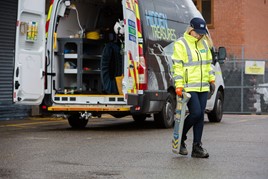 This feature originally appeared in the December 2020 edition of Fleet News. Read the article in the digital issue of the magazine by clicking here

The Government’s announcement to bring forward the ban on the sales of new diesel and petrol cars and vans to 2030 has brought that date sharply into focus for the fleet industry.

But it was already at the forefront of Severn Trent Water’s mind as last year it committed to operating an entire fleet of electric vehicles by then.

This is part of its triple carbon pledge, which will also see the water and waste company achieve carbon neutrality and use 100% renewable energy by 2030, well ahead of the Government’s 2050 target.

The organisation has already recorded a number of successes – it already generates more than 50% of its energy through its own renewable sources and procures renewable backed electricity for the remainder. But, transitioning the fleet of around 400 cars, 1,500 vans and 150 HGVs and tankers to electric brings its own challenges.

“Before the triple carbon pledge we were trialling electric vehicles (EVs) and charge points, but this (Government announcement) has ramped up our ambitions,” says David Gibbin, energy flexibility manager at Severn Trent Water, which is a member of the EV100 group.

One of its first steps was to commission a fleet review from low-emission vehicle consultancy Cenex (see panel, p46), to identify what vehicles were available, the timescales involved in electrifying each vehicle segment and the roadmaps around new technologies.

“That provided some real clarity for us about what was possible now and what areas might be more difficult,” says Gibbin.

Severn Trent Water’s sustainability report, published earlier this year, outlines some of the actions it will take.

These include buying only electric cars from now on, reaching 100% in use by 2026 in line with its fleet replacement programme, while the company also began purchasing small electric vans for shorter trips this year.

Larger vans – as well as light commercials which can tow – are identified as more of an issue through limited availability, but Severn Trent Water expects greater numbers of suitable models to go on sale in the next few years and plans to buy only electric vans from 2023 onwards.

The organisation will also explore how it can weight its fleet towards smaller vans – for example, by carrying less kit – to speed this process.

It has already identified vehicles which could now be changed for EVs and these tend to mainly be the ones which have well-defined routes and are left at Severn Trent Water sites overnight where they can be charged.

“Those are definitely the low hanging fruit, but we have still got an operational base that is very reactive to jobs such as a pipe burst in the middle of a field in the middle of nowhere that requires a lot of tools and equipment,” says Gibbin. “They can’t go electric yet as we need the vehicle technology, range and payload to improve, so there’s a balance for us.”

Severn Trent Water’s sustainability report says, based on today’s outlook, electric options for its HGVs and tankers may not be available by 2030.

“There will have to be a shift in technology to hit the pledge we made for those, but we have identified there’ll be some sort of alternative fuel for them which will still fit in with the overall ambition to decarbonise the fleet by 2030,” says Gibbin.

Among the low-carbon options Severn Trent Water is investigating are hydrogen and biogas. The organisation may be able to produce the latter from its own operations.

It already generates the equivalent of more than 50% of its energy needs through solar panels, wind turbines and anaerobic digestion, which is a by-process of sewage treatment.

“We have a real opportunity not only to fuel our own vehicles on our sites, but actually fuel them in a green way and there’s a push to make the most of this opportunity,” says Gibbin.

A key part of Severn Trent Water’s fleet electrification is to demonstrate value for money: its sustainability report estimates the EV strategy will begin to deliver wholelife cost benefits from 2022, helping to lower operating costs.

“Our finance team has built a cost model that looks at the overall total life cost of the vehicle, breaking down the options we had to build our strategy,” says Gibbin.

“That is crucial, really, to say ‘yes, we can do this and it is worth us doing it’, not only from an environmental perspective, but from a business perspective.

“Ultimately, we’re a regulated business, our customer bills go towards us running the company, so we have to be careful to use their money in the most sustainable and cost-effective way.”

Severn Trent took on its first electric vans – seven Nissan eNV200s – two years ago to trial and also operates a number of electric all-terrain vehicles (ATVs) on its sites.

At the beginning of November, it expanded its electric fleet with 19 Hyundai Kona Electric models and will take delivery of nine more electric vans before the end of the year to give it 35 EVs.

In May, it announced it had teamed up with EVBox to install 352 chargers at its sites, with this project due to be completed by the end of next year.

As well as being used by operational vehicles, the workplace chargers should encourage grey fleet drivers to switch into EVs as they will help remove any charging anxiety employees may have, says Katherine Hawker, transport manager at Severn Trent Water

“Everybody has the same barriers with EVs – it’s always cost, charge and range,” she adds.

“If you can provide a charge point at work, that almost takes away one barrier.”

While Severn Trent Water’s initial uptake of EVs may appear low, Gibbin says the company is using this time wisely.

“Over the next couple of years we’ll learn a hell of a lot about charging, and also about the vehicles themselves as we put more out on the fleet to a point where we’re ready for the big uptake in our numbers,” he adds.

Analysing real-world data is essential before recommendations can be made

Cenex’s review of Severn Trent Water’s fleet identified reductions of 52,000 tonnes of CO2 emissions and 80,000kg of NOx when the transition to a fleet of low emission vehicles is completed.

“The overall aim of a review is to help a fleet identify which low carbon technology fits which vehicle in which operation,” says Rob Anderson, senior fleet specialist at Cenex.

Key to carrying out a review is accurate data. This includes the vehicles currently on the fleet, the mileage they cover, their duty and replacement cycles and fuel use, as well as information such as the weight commercial vehicles carry.

Anderson says Cenex analyses this using data from real-world vehicle trials it has managed and this also covers factors such as whether the vehicle is being operated in urban or rural areas.

A review aims to identify a roadmap of what vehicles can be transitioned to electric and when, as well as outlining what charging infrastructure needs to be installed.

“Some organisations, say, give us two cases: total cost of ownership (TCO) neutrality, or an analysis if money was no object to put the right low emission technology across the entire fleet,” says Anderson.

“With TCO neutrality, in some instances you’ll get cars and small/medium vans which will make significant TCO savings. Those savings can be used to offset the increased costs of low emission technology in other vehicle segments, so it balances the books.”

Anderson recommends fleets run trials to help build acceptance of EVs. “If you are getting two or three vans in for three or four months, share them out so different people can drive them and understand the technology,” he adds.

“There’s fear, there’s uncertainty, there’s doubts, but we find most of those can be overcome as soon as people drive an EV and understand the technology.”

The reasons an organisation should adopt battery electric vehicles can be boiled down to the three Es: economic, environmental and ethical

Highlighting the huge savings drivers can make by choosing an EV is a great persuader. There are also other ways to entice employees to adopt the technology.

What are the electric vehicle charging options?

Ensuring an electric vehicle has enough charge in its battery to carry out necessary journeys is critical, but what options are available?