Kia drives up its numbers without forcing market

Manufacturer won’t hit a registrations number ‘at any cost’ so batch deals avoided and no pushing cars into daily rentals. Andrew Ryan reports 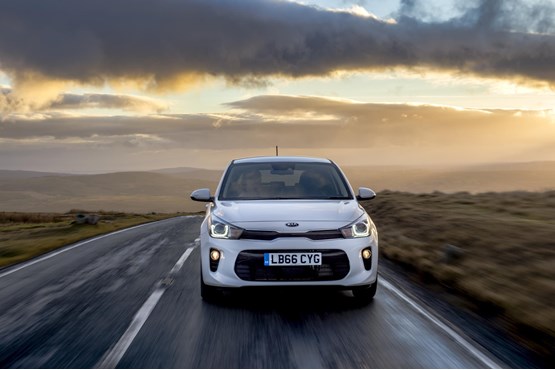 This was a new record for Kia and although the new Sportage SUV played a starring role – the model range accounted for 23,346 fleet registrations (20,983 ‘true fleet’) during 2016 – the manufacturer’s progress can be attributed to much more than that.

“We have made a real effort to engage with all the major leasing companies,” says John Hargreaves, head of fleet and remarketing at Kia Motors (UK).

“Five or six years ago we had tenuous links with them: they didn’t really want to have 4% or 5% of their fleet being Kia because they considered that to be rather a high risk profile, whereas now they are really quite content to hold that number of our cars.

“In fact, a lot of leasing companies are actually trying to increase the number of our cars they have got: they feel it is a good risk to have rather than something they would have shied away from in the past.”

Hargreaves says this has been made possible by the brand’s “strong residual values”, which means the monthly leasing rates offered to fleets are becoming “more and more competitive”.

“What we haven’t been doing with contract hire companies is batch deals where, if they buy 500 cars, then we give them a super deal and then they find homes for them, so they’ve been wanting to take the cars on and sell them at normal rates rather than us forcing the market there,” he adds.

Kia has also seen growth through Kia Contract Hire, its own internal contract hire company, and has taken a controlled approach with leasing brokers.

“We have just a very limited number of brokers and give them small incentives to sell our products rather than going out to the broker network in general and just doing price-led deals,” adds Hargreaves.

The work has paid off. Figures from the Society of Motor Manufacturers and Traders (SMMT) show Kia last year sold 21,429 vehicles into leasing, an increase of 92.4% compared to 2015.

Another key aspect of Kia’s fleet strategy is not to force the market by pushing cars into channels such as daily rental, says Hargreaves.

In fact, the manufacturer has reduced the number of cars it puts into short-cycle business, he adds.

“We operate generally on the principle that we don’t want to do any more than 10% of our total volume through rental channels and actually we were generally doing a lot less than that,” says Hargreaves.

“If you look at Rio, lots of manufacturers put several thousand of those types of small cars into rental, but we are going to do a few hundred – about 5-6% of registrations – which is a very healthy positon to be in.

“Of the rental we do on Rio, almost all of them will be on buy-back, so they will come back to us and we can control the RVs on those.”

He adds: “We’ve started to do reasonably regular and significant volumes of public sector business, both through block orders and auction functions, but also orders of ones and twos with small cars like Rio and Picanto where they’ve been competitively placed against key competitors.

“We’ve done small business sales at a steady level, and we want to improve that and get the dealers further engaged in these (see panel above).

“Obviously you don’t know how many vehicles each of those companies buy, but we now have six times as many people who have got agreements with us to what we used to have, so it’s changed a lot.”

Kia’s record year in fleet was reflected in the retail sector, giving the manufacturer total UK registrations of 89,364 units, a year-on-year rise of 13.9% in an overall new car market which increased 2.3% to 2.69 million.

The manufacturer expects the market to shrink this year by about 5.5% to 2.54m vehicles, but Simon Hetherington, commercial director at Kia, is confident his brand will buck this trend.

“We have set ourselves ambitions to grow in this market by 3%-4%, so we will break through into more than 90,000 units this year,” he says.

Much of Hetherington’s confidence is due to the freshness of the manufacturer’s model range. Last year it launched Sportage, Optima saloon, plug-in hybrid and Sportswagon, and Niro.

This year’s launches will be Rio, Picanto and Stinger, while plug-in hybrid versions of Optima Sportswagon and Niro will also be introduced.

The anticipated growth will help Kia meet its objectives set out in its Vision 100 strategy, which it announced five years ago.

Under this, the manufacturer targeted annual registrations of 100,000 this decade to become a top five volume manufacturer. “Reaching 100,000 units a year feels within our grasp based on the recent rate of growth,” says Hetherington.

Fleet will have a major part to play in this achievement: Hargreaves feels a 4% market share is realistic in the medium term, growing from 3.19% last year and 1.5% in 2011.

“However, we do not want to get into chasing volume for volume’s sake,” adds Hetherington.

“We want a sustainable, profitable business model. We want to have an ambition throughout our whole organisation. We want our network to grow and to deliver more, but not to hit a number at any cost.”

Kia currently has a 187-strong dealer network, with 20 business centres among them.

“Our medium-term target is to have 30,” says John Hargreaves, who hopes to be near that target by the end of this year. “To be a business centre dealer you do have to invest fairly heavily and, most notably, you do have to have a dedicated person just to do fleet.

“You have to run extra demonstrators and you have to invest in local advertising, so for a lot of our dealers it isn’t viable. We are also embarking on an initiative so all dealers have a basic level of expertise in business sales.

“We don’t want experts, but if someone comes in and wants to talk about business finance, contract hire and the pros and cons thereof, we want someone trained in each dealership who can give them practical business advice.”

“Diesel is still our dominant fuel,” says John Hargreaves. “We are seeing more demand for petrol at the lower end of our model range in small cars, but looking at Ceed and Sportage – our two fleet staples – diesel is still very much the dominant source of power for us.”

The proportion of diesel models sold across Kia’s model range grew fractionally last year to 54%, driven by the success of Sportage.

“The main thing I’m seeing is a difference in petrol and diesel residuals,” adds Hargreaves. “Traditionally, diesels have been the more expensive cars to buy, but they also had higher residual values.

“We are now getting to the stage of parity or, in certain cases, you get a higher petrol residual value than diesel, and, eventually, that will feed through into wholelife costs and then into fleets.”