Rupert Armitage been on a steep learning curve at Auto Windscreens, but his root and branch change is delivering results. Gareth Roberts reports

Rupert Armitage will readily admit glass repair and replacement wasn’t on his radar three years ago. “I hadn’t even had my windscreen replaced until I came here,” he says.

Talking to him now, you could be forgiven for thinking it has been his lifelong passion.

The son of a Yorkshire farmer, Armitage chose not to follow in his father’s footsteps and a way of life stretching back generations. 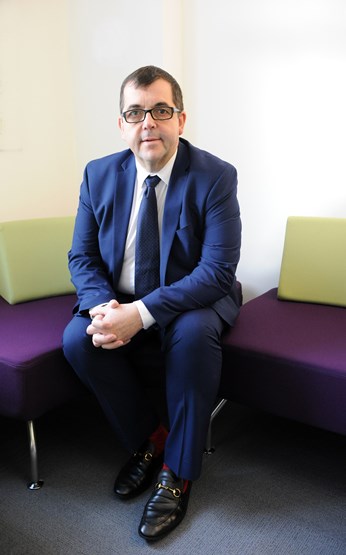 Instead, an early interest in the financial markets saw him become a trainee broker with a new firm in London, in the late 1980s.

Twenty-five years later, he was a member of the board and was responsible for the global trading arm of the business.

“I was on first name terms with the likes of (Sir) Terry Leahy (former CEO of Tesco) and (Morrisons chairman) Andy Higginson,” Armitage recalls.

“It gave me an appreciation of how to run a business and what the mentality was of those people that ran those businesses.” 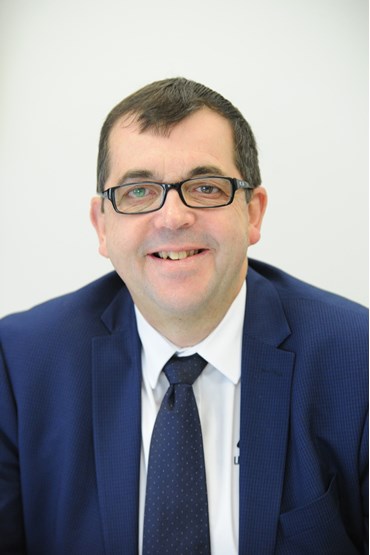 He was happy at Shore Capital, but an invite to a four-day trip to Las Vegas to mark the 60th birthday of the Queen’s personal jeweller in 2015 would lead to Armitage to being appointed managing director of Auto Windscreens in September 2016.

Marketstudy Group, with businesses operating in the insurance market, had acquired the brand name of Auto Windscreens, along with some of the company’s assets, including the Chesterfield head office, two freehold sites and 20 leases in 2011.

Four years later, the CEO and founder of Marketstudy, Kevin Spencer, called Armitage and asked to join him on the trip to Las Vegas. The group had grown substantially since Spencer had established it in 2001 and he wanted Armitage on board.

Las Vegas may not have provided the typical backdrop for a job interview, but a few months later Armitage agreed to join Marketstudy and after two months in post was dispatched to Chesterfield for a fortnight in December 2015 to analyse the Auto Windscreens business.

Days after submitting his report, he was told he was going back to Chesterfield as acting MD. The firm had recently acquired AA AutoWindshields and had moved to a wholly-mobile service. “It was close to being shut down,” admits Armitage.

“The thing with shutting the hubs was they never realised how much hands-on scheduling those hubs did.

"They knew the technicians, they knew the local area, but all of a sudden you had somebody in a call centre in Preston dealing with a job in London who thought it was a five minute walk between a job in N1 and one in N2. We were constantly letting everybody down.”

He wanted to understand the business from the shop floor up. “I knew nothing about glass,” he says. “I could have written on a matchstick, let alone on a matchbox, what I knew about glass.” 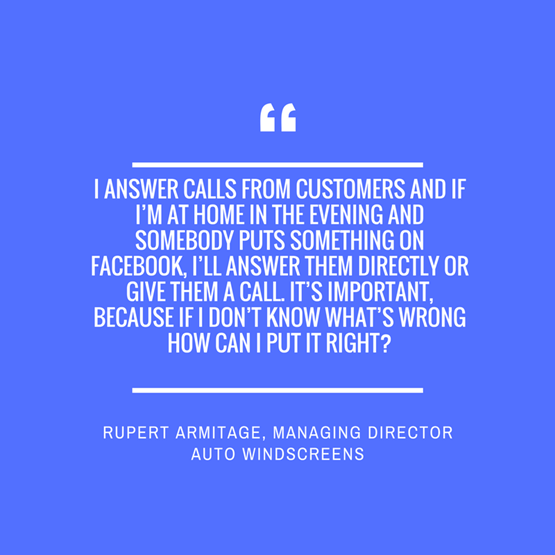 The first thing he did when he went back to Chesterfield was get the two senior trainers to show him how to change a windscreen. “I don’t ask anybody to do anything I wouldn’t do myself,” he says.

“I answer calls from customers and if I’m at home in the evening and somebody puts something on Facebook, I’ll answer them directly or give them a call. It’s important, because if I don’t know what’s wrong how can I put it right?”

Armitage set about overhauling the business. Poor performing technicians were let go, as were a couple of fleet contracts where he felt they were not delivering the service levels required.

He also turned to one of the company’s most experienced hands, appointing James Macbeth, as the new operations director.

The pair set about focusing on lead times and service delivery, and reopening a network of hubs again.

Efficiency levels improved, with technicians almost doubling output from two-and-a-half jobs to four-and-a-half jobs per day within nine months of instigating the changes.

Today, the business has 42 hubs, with a further four in the process of being opened, 325 technicians, 290 of which are mobile, and a new generation of technicians enrolled in its apprenticeship scheme.

It has entered into a new partnership with glass manufacturer Pilkington, which resulted in 98% next day glass availability.

It has also improved the online booking process, launched a live chat facility and improvements at the call centre saw its target of 80% of calls answered within 20 seconds, surpassed in 2017, with a rate of 87%.

Furthermore, its investment in technology resulted in the launch of Technician Tracker last year. The online platform keeps customers informed on their scheduled appointments from booking to completion via a text service. 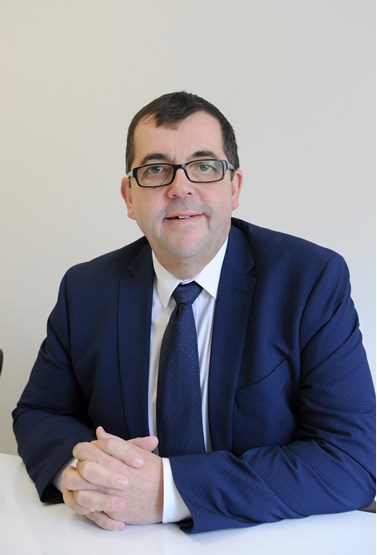 It also announced it was adopting CitNow technology. Every technician is now able to video the vehicle while they are pre-repairing the glass, with footage made available to partners, to enhance and aid transparency.

Two years after joining the firm and 18 months after being appointed MD, Armitage believes Auto Windscreens again has an exciting future.

In the last six months of 2017, it won five manufacturer fleet contracts. It has a growing plant business and is now airside-compliant with teams stationed at both Gatwick and Heathrow airports.

“We’re rebuilding the business,” he says. “A reputation takes hours to destroy and years to recover. I think we’re now at that point where our reputation is far exceeding people’s expectations.”

It was perhaps the biggest nettle Armitage had to grasp when he joined Auto Windscreens. How do you deal with the growing prevalence of advanced driver-assistance systems (ADAS) in today’s cars?

The company organised a forum at the Birmingham NEC in November 2016, involving manufacturers and insurers.

“The overriding message that came out of the forum was you’ve got to fit an OEM part and you’ve got to put it back into the network,” explains Armitage.

“We agonised about what was going to be the right process, but the more people we spoke to about it, everybody said exactly the same.” 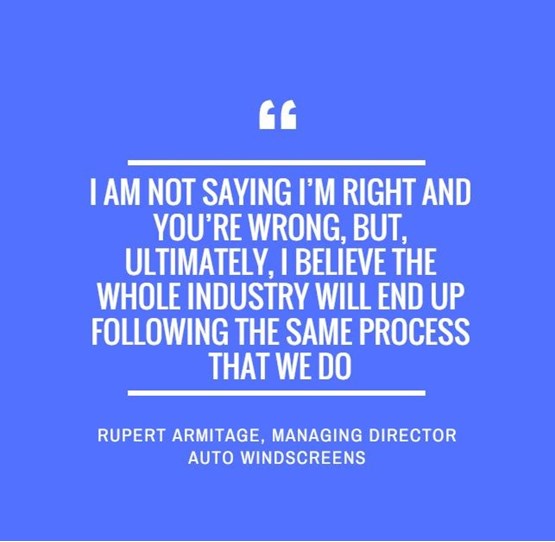 Drivers could be left with vehicles that are unsafe if they have their ADAS recalibrated using a third party aftermarket solution following a windscreen replacement. Other providers have taken a different stance.

“I am not saying I’m right and you’re wrong, but, ultimately, I believe the whole industry will end up following the same process that we do,” he says. “We’re experts in fitting glass; we’re not experts in the calibration of vehicles.”

A dedicated team of call-handlers deals with ADAS fittings. The team gives the customer the option of either having the glass replaced at home or at a hub, with a follow-up appointment at a franchised dealer for recalibration.

Alternatively, the technician will complete the fitting at the dealership where the recalibration will be carried out.

With new research from the Society of Motor Manufacturers and Traders (SMMT) and JATO Dynamics suggesting 66.8% of new cars are offered with at least one self-activating safety system, either as standard or as an optional extra, Armitage insists Auto Windscreens’ business model is driven by safety, not profit.

It has signed agreements with all the major manufacturers, negotiated an average discount of 25% on OEM glass and a national recalibration rate of £125.

“I just know that everybody at Auto Windscreens can sleep well at night, because if and when that accident does happen, I’m confident it won’t be one of the cars we’ve worked on.”

Auto Windcreens has named two champions in its annual Clearly the Best 2017 competition.