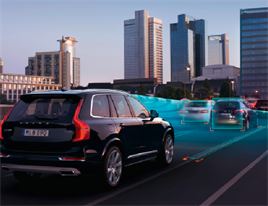 Vehicle safety broadly falls into three categories: pre-emptive technology, which helps to prevent a crash occurring in the first place; crash mitigation technology, which reduces the severity of injuries in the event of an impact; and post-crash technology, which alerts other road users or the emergency services to bring help as quickly as possible.

Manufacturers have historically placed most emphasis on mitigation, introducing airbags, seatbelt pre-tensioners and improved head restraints, but they are increasingly developing technology in all three areas as safety rises to the top of the agenda for fleets and European legislators alike.

Safety is one of Volvo’s main brand pillars: its history is crammed with innovations. Inventor of the three-point seatbelt; the first to introduce side airbags as standard fit; creator of the side impact protection system and whiplash protection system – it’s an impressive list.

According to the man in charge of future safety initiatives, there is no risk of the company resting on past successes.
Volvo’s ambition is to have no-one killed or injured by its cars by 2020, says Jan Ivarsson, senior manager safety strategies and requirements. The key area of focus is on collision avoidance technology, with much of the company’s latest developments featured on the forthcoming XC90.

Ivarsson describes the XC90 as a “leap forward in collision avoidance”, adding that much of the new technology will be fitted as standard to the car and added to new models as they are launched.

For a company obsessed with safety, the claim that we are seeing “a new chapter in safety technology” is worth exploring more closely.

Volvo has already sold more than one million XC60 models worldwide containing its CitySafety system (which automatically brakes the car at speeds below 19mph if an obstruction is detected), introduced in 2008. The XC90 adds pedestrian avoidance and cyclist detection as standard.

Radar and camera technology has been adopted from other industries, including the military, and forms the basis for many of Volvo’s new safety innovations, says Ivarsson.

Pilot Assist, a radar-based optional extra, removes much of the strain of driving in demanding situations by keeping the car a safe distance from the vehicle in front. It also ensures the car stays within its lane.

“This reduces the workload on the driver in congestion situations,” Ivarsson says. “Our data shows that safe distance and lane-keeping technology will reduce all types of incident, not just those that result in a crash.”

Research shows that drivers spend an average of around 20% of their time concentrating on things other than the road ahead, be that eating, phone calls or fiddling with the radio or sat-nav. The latest safety technology reduces the risk of a crash occurring as a result.

While Volvo’s primary objective is to reduce crashes happening, it also recognises the need to mitigate damage caused when one does take place.

Design is playing a role, particularly on the XC90 which has a revamped front-end to better absorb the impact in a variety of situations, such as frontal, small overlaps and posts.

“It has good energy absorption and progressive strength which protects passengers by surrounding them with deformation zones and a strong safety cage,” Ivarsson says.

“We use ultra-high strength boron steel in the car which is stronger and stiffer but without a weight penalty.”
Smaller four-cylinder engines also mean more space up front to absorb the impact.

Up to one-third of crashes involve the car leaving the road. Although lane-keeping technology should prevent this occurring in the first place, if it does then Volvo is prepared.

“If the car leaves the road it is very messy for the driver – they will roll around in the compartment,” says Ivarsson.
“We are putting electrical restraints in the front seats that are activated with large side decelerations. People will be restrained earlier in a collision; before the impact they will be in a good position in the seat.”

Such incidents can also put immense vertical pressure on the spine; Volvo has created space beneath the seat to allow movement and absorb energy to reduce the stress.

The run-off road protection system will be another standard fit item, much like most of Volvo’s safety initiatives.
The ultimate collision prevention system is the autonomous car and Volvo is one of the pioneers in this area as well (see page 48). Pilot Assist is the first step in that direction.

But its more immediate priority is to address head-on collisions, an area of concern for Ivarsson.

“On high-speed roads we have separation of lanes, but at lower speeds you can have lane drifting which is a problem,” he says. “There is also intersection detection where you cross the lane of traffic. There is more work to be done here.”

Volvo is also considering the actions of other drivers on the road and is looking at how it can reduce the chances of, for example, rear-end collisions.

Its cars will have warning functionality; if a tailing car comes up too fast it will trigger the blinking of the rear lights as a warning to that driver. At the same time, the seatbelts will be retracted to prepare for a possible impact.

This technology costs money, of course, but Ivarsson says it is more than offset by the reduction in crashes and savings in insurance premiums.

Audi’s speciality is lighting. Initially introduced as a striking design enhancement to its cars, it is now playing a more meaningful role in crash prevention.

The matrix LED headlights introduced on the R8 will be added to the facelifted A6 and other new models as they come to market. Matrix features 50 LEDs in each light which are activated or deactivated individually. It means each headlight is always on full beam; the system dims each LED that would shine directly on to oncoming and preceding vehicles ensuring illumination of the road is greatly improved.

The lights also recognise pedestrians who might be too close to the road and flashes a warning to alert them.
The next step in light technology is laser lights, according to Andre Konsbruck, director of Audi UK. “They operate in addition to the matrix beam and can light up to 100 metres using precise light streams,” he says. The technology was used on Audi’s Le Mans cars at this year’s 24-hour race.

Audi is also taking the cabin environment into consideration when assessing safety. It recognises that in-car connectivity and entertainment is going to proliferate, which potentially increases driver risk.

“We are investing time to analyse consumer behaviour in the car with all these technologies to limit the risk of them being distracted,” says Konsbruck.

“For example, what should be in the central console and what is in front of you rather than on the left-hand side of the screen? We are also disconnecting some systems at certain speeds when it becomes too risky.”

Konsbruck believes voice commands will become increasingly important as a way to control key functions. “We want no distractions in the cabin,” he adds.

Audi is also developing its own autonomous cars with pilots underway at a number of universities in America.
Its Volkswagen Group sister brands Volkswagen, Škoda and Seat share in the group technology being developed by the company.

In addition, Škoda fits speed limiters to its latest models as standard which fleets can set at their desired level.
Meanwhile, its new Fabia has a raft of standard-fit safety equipment, such as XDS+, a multi-collision braking system, and Prefill, where pressure in the brake system is increased with rapid release of the accelerator pedal, to enhance protection and prevention.

Front Assistant is a radar-based system which alerts the driver about the risk of a collision, while brake lights flash during emergency braking to warn traffic. In the event of a crash, the hazard lights are activated while fuel and engine are shut off and the central locking automatically unlocks.

Seat is pushing its latest safety equipment hard through national advertising of lane assist. According to UK managing director Neil Williamson, this approach “shows the importance for the business”.

Like Audi, with its pedestrian warning lights, Jaguar Land Rover has also extended its safety developments to include safeguarding people outside the car. Its new XE compact luxury car is set to be the first in its segment to feature an airbag pedestrian protection system as standard fit.

Triggered by sensors mounted in the front bumper, the scuttle-mounted system deploys an airbag within 50 milliseconds should the car come into contact with a pedestrian.

The airbag is designed to cushion the impact of a person on the car’s bonnet without blocking the driver’s vision and comes into action at speeds between 15mph and 31mph.

“We’re also introducing autonomous braking that is activated via a forward-facing stereo digital camera and is capable of avoiding an impact at speeds of up to 50mph,” says Paul Cleaver, vehicle programme director at Land Rover.

“Both these systems have been designed to assist drivers rather than distract them and are part of our ultimate goal for Jaguar Land Rover vehicles to have no involvement in road accident statistics.”

Among a raft of advanced safety technologies debuting in the XE is all surface progress control (ASPC), hailed as a unique traction management system to aid winter driving.

It is available on cars with automatic transmission and uses electronics to operate like a cruise control to gain traction over ungritted surfaces.

“It works at speeds between 2mph and 18mph and allows the car to travel smoothly without skidding. All the driver needs to do is concentrate on steering,” says a spokesman.

Another first in the XE is a laser head-up display (HUD) that projects high-contrast colour images directly in the driver’s line of sight. Smaller and lighter than existing HUD systems, it makes the virtual images appear to ‘float’ two metres ahead of the driver. It is also claimed to remain effective in bright sunlight and when the driver wears polarised glasses.

Meanwhile, Nissan is making its safety technology more accessible to fleets by bundling it together in a Safety Shield pack that is being cascaded out across its vehicle range.

However, Nissan GB managing director Jim Wright adds a note of caution with the proliferation of safety technology: fleets and company car drivers must be prepared for a much lengthier vehicle handover process.

“It can take two hours to hand over a car because of all the technology,” he says. “We are also recruiting innovation specialists at 50 dealerships whose role is to explain the technology on the car, not to sell them.”