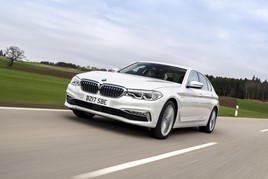 The fleet market data provider said that overall true fleet registrations were just 29 down on the previous month, which meant it fell 0.03%. It had grown for the previous two months.

Richard Worrow, of Dataforce, said the huge year-on-year increase in the executive car sector, which has also grown 14% year-to-date, was largely due to the executive sector’s poor performance in 2017, when it was affected by the VED changes and increases to taxation based on CO2 levels.

“So, given the taxation and the surge in SUVs which have also taken some market share, what is helping the segment?

“One word: hybridisation. With the BMW 5 Series and to a lesser extent the Mercedes-Benz E-Class really helping to ‘plug-in’ the extra numbers and boost the segment to its current level.

“Will it reach these highs of 2015 again? Possibly not, but we should certainly see an improvement over 2017’s low for the next couple of years.”

Volkswagen retained its position in June as the market leader in true fleet, with BMW second and Vauxhall third. Both grow their year-on-year true fleet registrations by 46.1%. 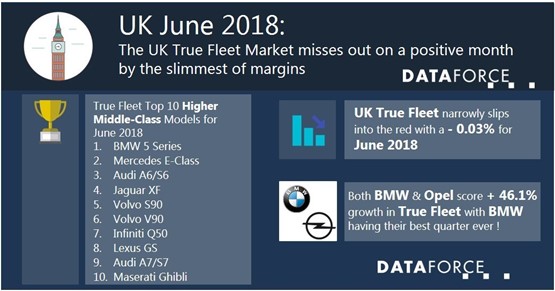 The UK true fleet market grew for the first time in 13 months in April, rising year-on-year by 6.3%, figures from Dataforce show.

True Fleet market shows second month of growth in May

True Fleet registrations have grown by .02% in May, following the first rise in 13 months in April.