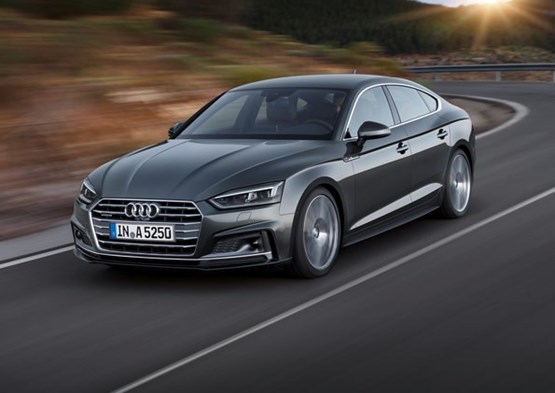 As niches go, the A5 Sportback fills one that performs well with user-choosers and fleet operators.

The Audi A5 began life as a two-door coupe in 2007, but the appeal of a two-door car is often too narrow to be accepted for business use. In 2009, the five-door A5 Sportback addressed this..

Sleeker and more exclusive than an A4 saloon, but with four doors plus a rear hatch, it quickly became established as a more upmarket alternative to a premium saloon.

The A5 Sportback shares technology and basic architecture with the A4, and the second-generation A5 Sportback arrives about 15 months after the latest A4 was introduced.

It brings with it the benefits the A4 had over its predecessor, including reduced weight (up to 85kg lighter – equivalent to removing a 13-stone passenger), higher equipment levels and more efficient engines.

The latest development of quattro means all-wheel drive is now ‘on demand’ rather than engaged permanently, with drive sent to the rear axle when sensors detect loss of traction. This reduces fuel use and cuts CO2 emissions in the official test cycle, along with a new stop-start system which can switch off the engine when coasting as well as when stationary.

Sport models have sat-nav, electrically adjustable front seats, LED interior lighting and a free three-month trial of Audi Connect over the SE, while the S Line has 18-inch alloys, lowered suspension and LED headlamps over the Sport.

Not only is the engine noise more subdued than before, the whole experience in the A5 Sportback is improved, with a more compliant ride and improved comfort.

The S-tronic dual-clutch gearbox has replaced the Multitronic auto on the front-wheel drive version of the car, giving it a more natural feel when accelerating – as well as providing smooth and rapid gearshifts – and improving fuel consumption.

Like the A4, the standard fuel tank on the 2.0-litre TDI is a tiny 40 litres – smaller than the tank in an Audi A1 – and a 54-litre tank can be chosen as an option. Likewise, a larger AdBlue tank can also be specified.

The car might be more fuel efficient, but with the standard tank, the inconvenience of more frequent fuel stops might become tedious.

Audi’s Sportback moniker is usually a byword for added practicality. But, with the latest Q3 Sportback, that simply isn’t the case.