"The steering is light and direct and the Kodiaq is relaxing to drive." 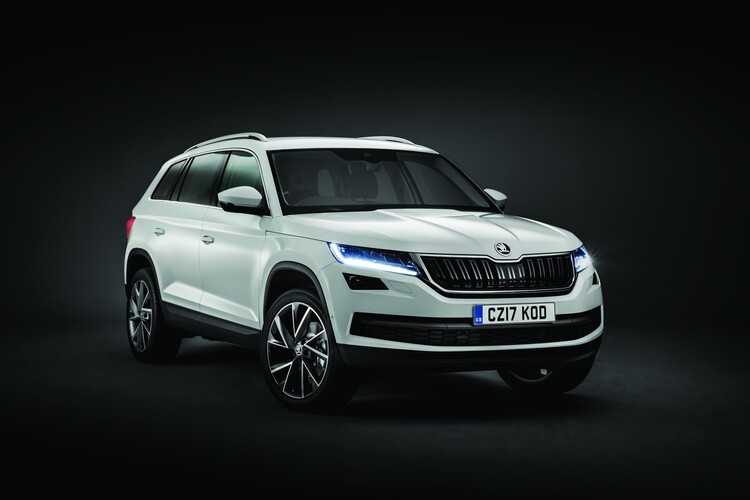 Skoda has pledged a full-scale attack on the SUV market with the new Kodiaq, the brand’s first foray into this sector.

In this mid trim you get the all-important third row seating, connected services with sat-nav, heated seats and LED headlights. The 150PS 2.0-litre diesel engine, which many will be familiar with from other VW group cars, is perfectly mated to the Kodiaq’s bulk.

It never needs to be worked hard and will return a respectable 56.5mpg on the combined cycle. CO2 emissions of 131g/km are the most attractive in the model range with this engine.

We also tried the 190PS unit which is a better choice for those wanting more performance, with a 0-60mph time of 8.9 seconds, but isn’t really worth the extra benefit-in-kind (BIK) tax and the additional £860 over the equivalent 150PS version.

The models with two-wheel drive and a diesel engine have the lowest emissions, but these are only available with the seven-speed DSG automatic transmission. That’s no hardship, however, as it’s one of the best auto-boxes on the market and suits a car of this size better than the manual. Shifts are seamless and the more involved driver is rewarded with steering wheel-mounted paddles.

Four-wheel drive is optional on all but the base spec S model with either a six-speed manual or the DSG, but even when it is selected the rear wheels are used only when grip is limited to minimise fuel consumption.

It’s unlikely many Kodiaqs will venture over more than a patch of wet grass but there is an ‘off-road’ button which alters the power delivery and traction control system. It also enables the use of the 360-degree camera system while on the move, so you can see obstacles along the way.

We ventured down a loose surface farm track and the car performed impressively.

Our test model was fitted with the 18-inch wheels (standard on SE) and ride quality was reasonable if not somewhat stiffer than on a Škoda Superb, but body roll was better than expected for a car of this size.

That said, it also had optional adaptive dampers which offer comfort, sport or normal settings, allowing the driver to adjust the ride comfort as required. Models on standard springs are likely to be less compliant.

The steering is light and direct and the Kodiaq is relaxing to drive. A host of assistance technology is available including adaptive cruise control and lane assist.

With all the systems engaged, the Kodiaq offers a semi-autonomous drive. The lane assist provides a continued steering input which takes some effort away from the driver but take your hands off the wheel and the car immediately warns you to stay in control.

Five-seat models benefit from the biggest boot in this class offering 2,065 litres of space with the rear seats folded (720l without) which shrinks to 270 litres in a seven-seater with all seats in use.

The third row of seats is only available on SE models (£1,000 option) or SE L and Edition variants (standard), but they don’t make the Kodiaq a rival for the likes of a Seat Alhambra. Legroom is restricted and the seats themselves are small, plus the rear windows are fixed and there is no ventilation system for those rearmost passengers – it’s best to think of it as a five-plus-two.

Skoda has included more than 30 of its ‘simply clever’ features in the Kodiaq, including umbrellas stored in the front doors, an ice scraper that resides in the fuel filler flap and, perhaps the most useful feature for a family oriented car, the door-edge protection system. It has small rubber trims that deploy automatically when opening the doors, minimising the risk of damage.

Most Kodiaqs are expected to go to retail customers, while Škoda is expecting around 30% to be taken by fleet. The current engine range doesn’t include an ultra-frugal option yet but the 2.0-litre TDI 150 still trumps rivals such as the 1.6-litre Nissan X-Trail (133g/km) and Hyundai Santa Fe (159g/km) for CO2 emissions.