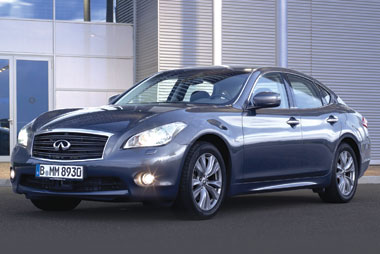 The Infiniti M, a BMW 5 Series/Mercedes-Benz E-class challenger, launches in the UK this month with two engine options.

For fleets, one can be immediately discounted – the 3.7-litre V6 petrol emitting 235g/km.

Instead, switch your attention to the 3.0-litre V6 diesel with its CO2 output of 199g/km and fuel efficiency of 37.7mpg.

Granted, those figures are still not class leading – consider the 530d’s 160g/km and 46.3mpg – but this is the car that Infiniti hopes will start to make inroads with fleets.

It anticipates that half of next year’s 300-400 sales will be snapped up by the corporate sector, primarily executives looking for something different to their usual German diet.

If ‘not being German’ is a selling point, then Jaguar XF and Lexus GS quickly come into the line of fire.

However, Infiniti is at pains to distance itself from Lexus. Yes, it willingly embraces the Lexus culture of outstanding customer service, but bosses constantly repeat the mantra that its models are about performance more than simply luxury.

Perhaps that explains the limited engine options. Certainly the 235bhp diesel delivers potent performance – unleashed, it powers the car from 0-62mph in 6.9secs.

The automatic gearbox is a little tardy, but the manual override adds urgency to the changes.

Sporty? Perhaps. However, the M is a big car and feels it too.

Unlike the 5 Series, which combines size with nimbleness, the M is lumbering on tight twisty bends.

If you put to one side the M’s sporty pretensions, as a cruiser it excels.

Quiet and refined, with the benefit of active noise control which cancels out engine sounds, it gently cossets the occupants in safety and comfort.

Pricing pitches the M head-to-head with its main rivals, with the diesel starting at £39,250 for the GT (luxury). GT and S (sports) are both available with the Premium package which includes all the hi-tech safety features.

The GT is well equipped, making the car competitive value. S Premium, meanwhile, comes in at a weightier £46,600.

For fleets looking for a more affordable, and fuel efficient option, Infiniti recently signed a deal with Daimler to bring four-cylinder diesel and petrol engines to its line up next year.

It has not yet announced which models will be chosen for the smaller, more fuel efficient engines, but M is likely to be one of the options.

What has been confirmed is the M35h hybrid midway next spring – and with CO2 emissions expected to be close to 160g/km, that could turn out to be the real fleet winner.

Breaking into the premium segment against established rivals was always going to be tricky, but the M shows Infiniti takes the sector very seriously.