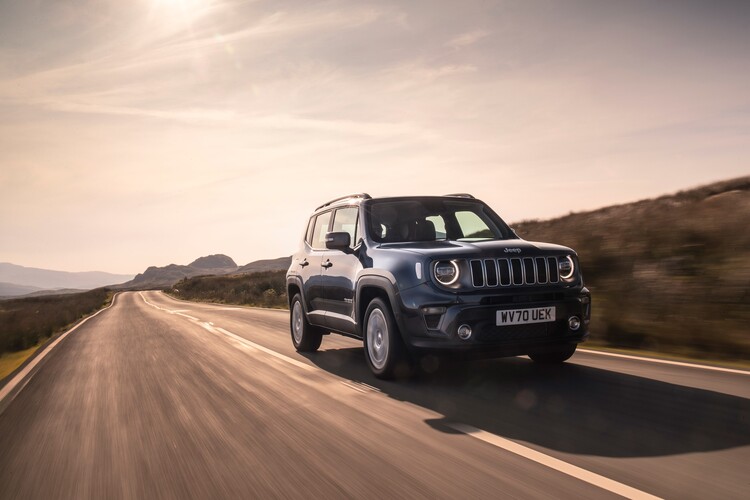 The Jeep Renegade 4xe is the first electrified Jeep in the UK and the company’s most fuel-efficient SUV ever, promising zero compromise in performance both on- and off-road, and 26 miles of all-electric range.

While a PHEV (plug-in hybrid vehicle) may not be the first thing that springs to mind when you think of Jeep, the current mechanical 4x4 Renegade puts out nearly 200g/km of CO2. The 4xe’s hybrid system with does the same job with 75% fewer emissions.

As a company car, the Renegade suddenly becomes a more attractive proposition, attracting just 12% benefit-in-kind tax. There is also the fact that the plug-in Renegades are by far and away the most powerful in the range, offering either 190PS or 240PS, dependent on spec.

Driven sedately, it’s actually quite good – not particularly fast but quiet and smooth enough, the 1.3-litre petrol engine only chiming in when you press the accelerator pedal too hard. Do so and you’ll discover a hesitant and jerky side to the gearbox that goes unnoticed at lower speed.

The 190PS Limited model is expected to be the most popular, priced at £34,445, which compares well against the £31,130 for the 1.3-litre petrol 4x4 Renegade. The 240PS Rubicon-ready Trailhawk 4xe is £36,430 but delivers off-road ability far in excess of what UK customers are likely to use.

If you do want to venture into the wilderness, Jeep says the PHEV is just as good as, if not better than, the standard car thanks to the additional power and low-speed torque the electric motor develops.

Despite the power on tap, the Renegade hasn’t been transformed into a hot hatch rival – although, in fairness, the plug-in bits only add 110kg. It drives fine, offering reasonable body control – unless you really throw it into a corner, at which point there’s a fair bit of roll.

The 11.4kWh battery can be topped up in less than two hours using a wallbox or under five from a three-pin plug. It occupies the same space as the fuel tank, which drops from 48- to 36-litres.

Jeep says this doesn’t matter because the Renegade can now deliver 120mpg-plus, so you gain back range that the fuel tank gives away. In reality though, unless you’re pathological about charging the battery, you might find yourself visiting the petrol pump more than normal.

The car’s boxy shape lends itself to good rear headroom, although taller passengers will struggle for leg space behind a lofty driver, and the boot remains a competitive 330 litres despite the addition of a battery and hybrid gubbins. In fact, the PHEV Renegade only loses six litres to the standard car.

The Renegade PHEV isn’t going to shake up the market, but its promise of sub-50g/km of CO2 does at least mean it’s now an option for people who liked the look of this charismatic car, but were otherwise put off by the emissions of the conventional engine range.

If it meets the very specific needs of your business, then it’s the default choice, and not a bad one at that.