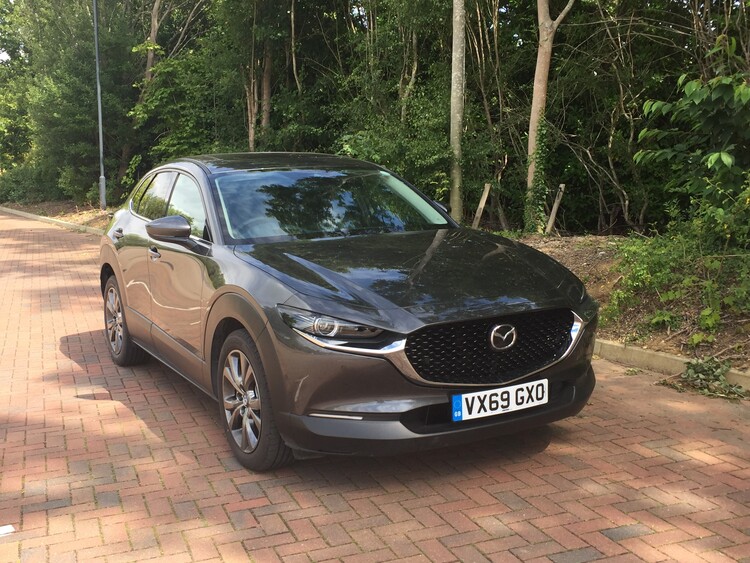 Our Mazda CX-30 has had its first service at local franchised dealer Donalds Mazda. The online booking wasn’t as slick as it could have been but it was all resolved with a phone call from the dealer representative who was polite and friendly.

The professional customer service continued at the dealership itself, with measures in place to ensure the showroom was Covid-secure, including signs on the door advising customers to wear masks, a hand sanitiser station, floor markings, Perspex screens at the desks and everything spaced appropriately. The service advisor also wore a mask when he showed me to the courtesy car.

I was impressed that within an hour of dropping the CX-30 off I had received a video of the inspection and the service advisor ensured the car was cleaned and ready for collection when I needed it.

So, overall, it was a good experience. Donalds knew it was a demonstrator owned by Mazda so it wasn’t a proper mystery shop, but I noted that another customer at the dealership was treated with the same level of customer service.

Like our previous Mazda3 long-termer, the CX-30 features the latest version of Mazda’s infotainment system, Mazda Connect. We praised the system because, in the interests of safety, Mazda has bucked the trend for touchscreens. Instead, it is operated using a rotary dial between the driver and front passenger seats.

The manufacturer examined the time spent looking away from the road to make a screen selection, and the time needed to refocus the eyes on something close versus the road ahead. 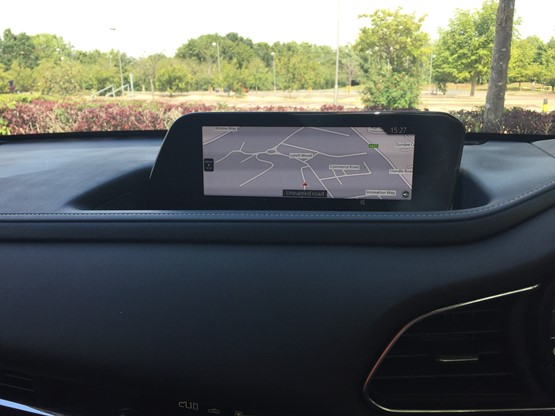 Its research has since been backed up by What Car?, which found that physical buttons are much less distracting to use on the move.

It took twice as long to adjust heating controls on some cars with touchscreen controls rather than physical dials. And it took up to four times longer to zoom out of the sat-nav map to view a pre-programmed route using a touchscreen than it did using a rotary dial controller.

BMW’s latest Live Cockpit Professional system was deemed the easiest to use out of the 20 systems What Car? tested with the Mazda Connect coming an impressive fifth (see fleetnews.co.uk/infotainment-test for the full listing).

Skyctiv-X proves petrol can be efficient

A weekend away in Norfolk earlier this month finally gave me the chance to do some longer journeys in the Mazda CX-30.

Mazda claims its Skyactiv-X petrol engine, which features mild-hybrid technology, gives diesel-like fuel economy so I wanted to see if we could achieve the official combined average of 47.9pmg with ‘normal’ rather than eco-friendly driving.

I’m pleased to report that during the weekend, which included a 68-mile trip from home to the place we were staying, plus some shorter trips to the coast of 25-30 miles each way, the fuel economy did reach 47mpg. The 2.0-litre engine has to be worked hard, but the CX-30 handles well with precise steering and very little body lean, which was appreciated on the twisty rural roads in Norfolk.

The seats are comfortable with the position slightly higher than in a hatchback, although the coupé-like design means you do sit lower than in the likes of the Nissan Qashqai.

Since our return, fuel economy has dipped slightly, with an average of 46.4mpg, after travelling around 2,500 miles in total since we took delivery of the CX-30 towards the end of June.

Practicality is a key selling point for crossovers and SUVs and company car drivers may want more than some bag hooks or cargo nets in the boot.

Enter Mazda’s smart cargo system – essentially a boot divider which can be used in multiple ways to better stow items and ensure they don’t roll around.

Mazda has recently made this standard on the CX-30 (SE-Lux and above) so our Sport-Lux model has had it fitted. Otherwise, it’s a pricey £360 on the entry-level SE-L. It is not compatible with a spare tyre. 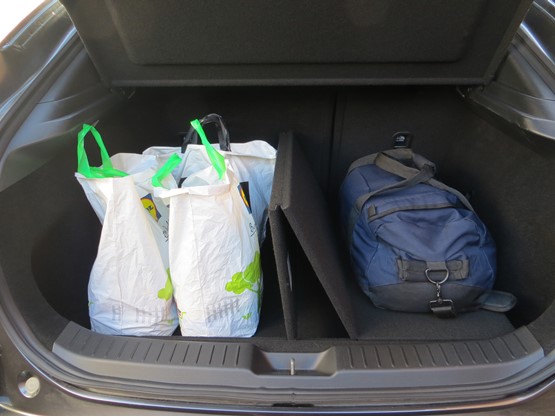 We tested a similar feature with the Nissan Qashqai last year, except Nissan calls it a ‘luggage board system’ and promises 16 combinations. We didn’t manage all 16, but did find several useful configurations.

Mazda makes no such numerical claim but there are more than enough ways to use the divider to store shopping bags, luggage or boxes in the 430-litre boot. It even allows me to protect my bulky pushchair with room for luggage.

I also like the fact that when the smart cargo system isn’t required and you want to use the full cargo volume (1,406 litres, with seats down) it can be kept folded up vertically on the side.

We’ve gone from testing the Mazda3 saloon to its compact SUV cousin, the CX-30, which shares the same platform.

The CX-30 is a new addition to the brand’s line-up, sitting beneath the CX-5, and competes with the likes of the Nissan Qashqai and Skoda Karoq.

It will appeal to company car drivers looking for something a bit different in the crossover market and those making the move from a diesel to a petrol engine.

Like the 3, the CX-30 features the new Skyactiv-X petrol engine, which is designed to give the fuel economy of a diesel and the performance and refinement of a petrol. It incorporates Mazda’s M Hybrid technology – a 24v mild-hybrid system that recycles recovered kinetic energy.

CO2 emissions for our Sport Lux model are 133g/km with a combined fuel economy of 47.9mpg.

Jeremy Thomson, Mazda Motors UK managing director, told us at last year’s Geneva Motor Show that “Skyactiv-X will be a substantial opportunity in the fleet sector”.

With only short urban journeys to date, I’ve not yet been able to verify the fuel economy claim but we did achieve the claimed 52.3mpg in the 3.

Thomson also promised that the CX-30 would take the brand in a “premium direction” and the interior does live up to that.

Our model comes with reversing camera, power tailgate and keyless entry (SEL-Lux and above), plus larger alloy wheels and privacy glass.