"It has excellent road-holding, exciting handling and an unbeatable sense of solidity." 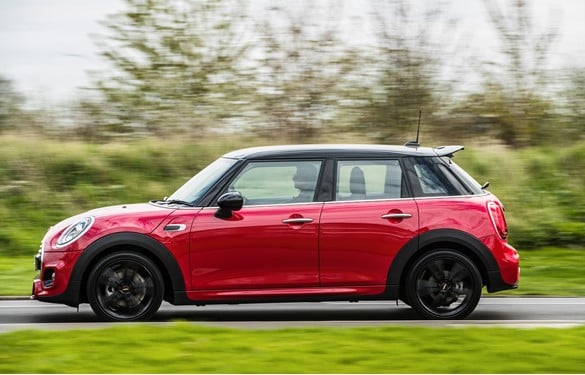 The Mini Hatch has no major changes, but WLTP results in CO2 rise across the range. By Matt de Prez

In keeping with BMW’s tradition of mild facelifts, updates to the Mini Hatch for 2018 have been modest.

The new model has some re-designed headlamps, which now incorporate LED technology as standard.

Also, there are some changes to the infotainment system. All models now get a 6.5-inch display with Apple Carplay and there is a new option package that bundles a host of connected services with sat-nav and a larger display.

At the rear, an injection of patriotism comes in the form of union jack shaped LED tail lights, reflecting Mini’s position as a British carmaker.

The headline announcement at the launch event, however, was a new Mini Yours Individual scheme.

The parts are designed to be fitted, easily, by the user and can be replaced with the standard parts before the vehicle reaches the end of its lifecycle.

Mini says this gives the driver a greater level of personalisation, but it also expects some company fleets to use the products for branding purposes.

Changes under the skin are minimal, although the base-model Mini One now has a de-tuned version of the Cooper’s 1.5-litre three-cylinder engine, replacing the 1.2-litre unit.

CO2 emissions have risen across the range, as a result of WLTP and the Cooper version we tested now emits 116g/km – a jump of 7g/km.

Performance is unchanged, so the 136PS motor can accelerate the Mini Cooper to 60mph in a respectable 8.2 seconds. Mini One models complete the sprint in 10.3 seconds, with emissions from 112g/km.

Mini offers a new seven-speed automatic gearbox on the refreshed model – replacing the old six-speed unit – which improves the emissions slightly, to 114g/km on the Cooper.

Pricing has also been increased, which means company car drivers will take a harder hit in their benefit-in-kind tax.

When comparing the old Cooper with the new one, like-for-like, BIK will increase by almost £100 per year.

So, should drivers disregard the new Mini in favour of one of its recently launched counterparts?

Well, the Mini sits at the top of its class for desirability and limitless levels of customisation. To drive, it is still the best in the sector. It has excellent road-holding, exciting handling and an unbeatable sense of solidity.

The three-cylinder turbocharged engine is more refined than the smaller-capacity units found in similar cars and its fuel consumption should be on par, with official figures suggesting 55mpg is possible.

The more aesthetically pleasing three-door version is likely to appeal to user-choosers. It is also £700 cheaper.