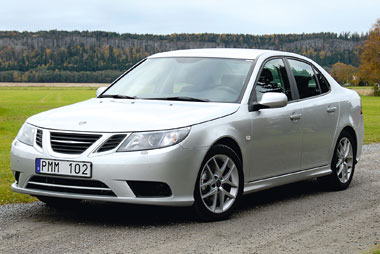 Few carmakers, if any, have had a time quite as torrid as Saab recently. Misunderstood and under-funded by parent company GM, the Swedish outfit languished for years with a range in need of revitalisation.

Now in the hands of Spyker, Saab is ready for revival.

So, the eight-year-old 9-3 is resuscitated with a twin-turbo diesel engine in three power outputs, spearheaded by the TTiD 180.
And while a new diesel engine can’t turn back the clock on the ageing Swede, it does give it one very compelling new statistic: 119g/km.

Of course, that’s not a mind-blowing CO2 emissions figure compared to the average eco hatchback – but consider that this 9-3 has 180bhp.

That’s more power than the BMW 320d EfficientDynamics. Granted, the BMW’s 109g/km emissions are marginally lower, but nonetheless the Saab is, all of a sudden, flying with the eco superpowers.

In addition to the twin turbos, Saab has reduced friction in the engine, added low rolling resistance tyres, lightened the car by replacing the sound deadening material, improved the aerodynamics and altered the gear ratios.

It also means 62.8mpg.
And it will be music to fleet users’ ears that the 9-3 has dropped below the all-important 120g/km threshold for the first time (except Aero models). With that comes BIK tax at 13%.

Estate and convertible drivers get a slightly worse deal: those cars emit 122 and 137g/km respectively, both pushed into the 18% BIK bracket.

For those wanting to keep their P11D price figure down, the old 120bhp and 150bhp TiD diesels are replaced with TTiD units boasting 130bhp and 160bhp. Both have identical CO2 and economy figures to the 180bhp version.

The 180bhp diesel engine is a real cracker and the 9-3 balances responsive handling with pothole-smothering comfort. Tall gearing means it settles at low engine speed on the motorway, nice and quiet.

The gearshift is the car’s real weak spot. It’s lumpy and imprecise.

That and a cabin that’s starting to look its age now are the only real gripes; the 9-3 isn’t a benchmark car in any area, but nor does it feel a generation behind any more.

In a nutshell, the 9-3 diesel is better and cheaper than it was before – and you can’t really ask much more than that.