"The Lexus ES is a worthwhile addition to the executive car segment and offers a low-CO2 alternative to segment leaders. " 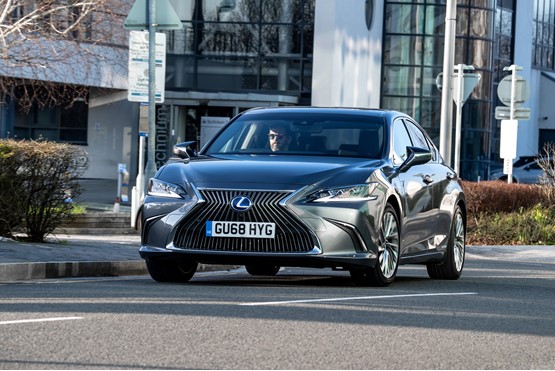 Lexus is aiming to woo fleet customers with its new ES model that boasts low CO2 emissions and a high specification.

Replacing the GS in the brand’s UK line-up, the ES is a front-wheel drive rival to the BMW 5 Series. It has just one engine – a self-charging hybrid.

CO2 emissions start at just 100g/km, which combine with a starting price of £35,150 to offer significantly cheaper company car tax bills than the class-leading diesel models.

The base model, known as ES, comes equipped with sat-nav, Bluetooth, parking sensors and heated front seats – just like its rivals. But, it also gets keyless entry, adaptive cruise control and a sunroof, giving it a distinct price advantage.

A range-topping Takumi version is also available, packed with features such as electric reclining rear seats and a 17-speaker Mark Levinson stereo. It costs £45,650.

The 2.5-litre petrol hybrid engine is all-new for the brand. It develops 218PS and is mated to a CVT gearbox.

Lexus has made refinement a top priority and the ES features more sound deadening than any of its previous models.

The results are noticeable. Wind and road noise are barely perceptible making the ES a fantastic long-distance cruiser.

We have no complaints about the comfort levels and there are plenty of high quality materials to give the ES a cabin that matches the best in class.

Compared to previous Lexus hybrids, the new powertrain is more refined and more responsive. While the electric-only range is still limited to just a couple of miles, Lexus says that during real world driving the electric motor is actually powering the car for around 45% of the time.

The four-cylinder engine lacks the torque of its diesel rivals, so acceleration is more progressive than aggressive. The 0-60mph benchmark takes 8.9 seconds.

Under WLTP testing, the engine returns 52-59mpg – which, again, is inline with diesel counterparts.

While handling isn’t the car’s party-piece, the adaptive suspension on F-Sport models does provide an excellent balance of comfort and rigidity when combined with the ES’s sharp steering.

The standard model feels less sure footed but still delivers a silky-smooth ride.

The ES is a worthwhile addition to the executive car segment and offers a low-CO2 alternative to  segment leaders. Unlike plug-in hybrid models, its low price makes it accessible to more drivers.