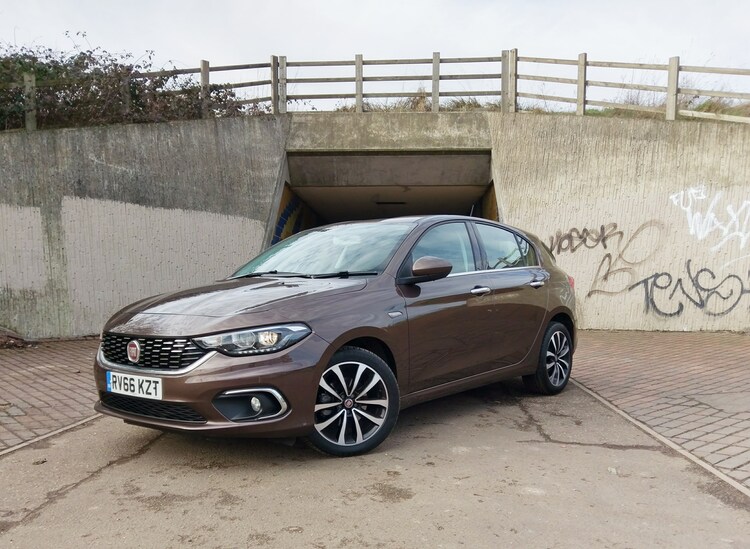 Let’s clear something up from the start. The Tipo hasn’t broken down, failed to start or fallen to bits.

Wherever I took the Italian hatch I was often met with disapproval from those who’d long lost faith in the brand.

But I’m pleased to say the old adage ‘Fix It Again Tomorrow’ no longer applies.

We covered just shy of 10,000 miles during the past six months and the Tipo has required nothing more than a top-up of windscreen washer fluid.

The car has split opinion in the Fleet News office: while I have been championing it, the rest of the team has been less enthusiastic.

Perhaps it’s because I’m overwhelmed by bigger sister, the Alfa Romeo Giulia, or the fact I have an Alfa at home and understand that a car with flaws is a car with character.

You have to remember this is Fiat’s first attempt in the sector for more than 10 years and it has gone in at the lowest price point.

It lacks flair when it comes to cornering, but makes up for it with power.

Seriously, our long-term Renault Megane – which emits just 2g/km less of CO2 – feels like its towing a trailer full of bricks compared to the Tipo.

Any criticisms I can think of for the Tipo can be countered by either its price or its space.

But my main gripe is its gearbox, which has a shorter throw for second, fourth and sixth – meaning you never quite feel like you’ve fully engaged a cog when shifting.

Also, for reasons I can’t fathom, I regularly activated the main beam when trying to indicate left.

These minor indiscretions aside, I’m a fan of its simplicity.

There is a proper handbrake, a proper key and a proper volume knob on the radio.

For those who don’t quite dig the monumental adoption of technology in cars then the Tipo could be right up their street.

A slight reshuffle in our long-term fleet saw me take on our Fiat Tipo for a week, and it held a few surprises for me – some good, some less so.

Until getting into the hatchback I hadn’t appreciated how spacious it was. Legroom in the rear is particularly generous, while at 440 litres its boot is significantly larger than most lower-medium cars.

The Tipo is also pretty good to drive. The 120PS engine is a real highlight, delivering plenty of performance, while the comfortable ride means motorway journeys are hassle-free.

However, other than its space, the interior is disappointing. The design – including the typefaces used on the instrument panel – are dated, while the quality and textures only exacerbate this impression.

This could be overlooked if it was reflected in the costs but, in Lounge trim, it isn’t.

The Astra misses out on some equipment – for example, it has air-conditioning instead of climate control – but gains in others: for example its multimedia and satellite navigation system uses an eight-inch touchscreen.

The Vauxhall also feels far more modern and upmarket, and in a straight fight the Astra would be the clear choice.

However, the Tipo isn’t without its charms and makes much more sense in the 1.6 Multijet Elite variant, which has a P11D price of £17,330.

The fleet-specific model, which loses equipment such as climate control, is fitted with an eco pack which increases efficiency to 89g/km and 83.1mpg. Its running costs are 27.23ppm.

Our regular photographer Chris Lowndes has covered a fair chunk of the Tipo’s miles this month as he went around helping us to immortalise many of you in print.

He shares my enthusiasm for the Italian hatch. Its 440-litre boot holds plenty of camera equipment, giving it an advantage over the Vauxhall Astra (370 litres), Volkswagen Golf (380) and Citroën C4 (408).

Its keenest rival is the similarly priced Škoda Rapid which manages to top the Tipo with a 550-litre boot.

The Tipo redeems itself with a higher level of equipment. Škoda choosers will need to pick plenty of options to match the Fiat’s spec.

Drivers may also be disappointed by the disconnect between the Rapid’s name and its performance. The 1.6 TDI lags four seconds behind the Tipo in the 50-70mph dash.

Had the Tipo been launched five years ago it would have been a credible contender with some of the best the C-segment has to offer.

But other models have developed at a much faster pace, leaving the Tipo on the back foot.

It’s not that the car is low-spec, it’s just a bit dated. The infotainment system is the best example. It’s impressive on paper: a five-inch screen with Bluetooth, TomTom navigation and connected services. But the display is far too small, especially for a touchscreen, the resolution is poor and the digital radio only has four pre-sets.

Fiat doesn’t ask for a lot of money in return for all the equipment, even if it is a bit ‘last-year’. Compared to rivals it’s cheaper and bigger – it’s just not one for the Apple generation.

Squeezing the most mpg from the Fiat Tipo’s 1.6-litre diesel engine is proving tougher than I expected.

The model is reported to achieve an impressive 76.3mpg on the combined cycle. I have struggled to keep the reading above 50.

The indicated figure is extremely accurate. Where some cars will report wildly inaccurate data, on the last three fill-ups the Tipo has calculated its own fuel consumption to be within 0.5mpg of the actual figure. It’s just a shame the result is so far off the advertised numbers.

According to the Equa Index, our Tipo should be getting around 56mpg and so far I’ve managed 53. However, the rival Škoda Rapid performs even more poorly, with Equa yielding just 51mpg (vs 74.3) for the 1.6-litre TDi SE manual. Similarly the Ford Focus 1.5-litre TDCi Zetec managed just 52.9 (vs 74.3), in the same tests.

It doesn’t have the climate control and automatic headlights and wipers fitted to our Lounge model, but does feature adaptive cruise control. Special 16-inch alloy wheels and a ‘smart’ alternator help to improve efficiency.

There is no penalty on performance either, the more efficient car develops an identical 120PS and can accelerate from 0-60mph in 9.5 seconds and reach a top speed of 124mph.

With CO2 of 89g/km the Elite saves drivers around £70 per year in company car tax but real-world economy testing suggests there will be no gain at the pumps.

Our latest long-termer, the Fiat Tipo, is an important model for the brand because it puts Fiat squarely back in the C-segment at an attractive price point.

But to succeed in this sector it has to face rivals such as the Škoda Rapid, Seat Leon and Peugeot 308 and, over the next six months, we will be keen to see how it performs.

We opted for the 1.6 MultiJet diesel in Lounge trim, which comes equipped with sat-nav, auto lights/wipers, climate control and 17-inch alloy wheels as standard, plus metallic paint in Magnetic Bronze as a £550 option.

A notable absence was the safety pack (which includes a speed limiter and auto emergency brake). Without including it as standard equipment, the Tipo scored a lowly three-star rating in Euro NCAP testing last year.

Now, however, Fiat says: “Recognising the importance of maximizing the safety of our customers, we took the decision to add safety packs to all units as standard. There is no need to retest the Tipo for NCAP, as it automatically becomes a four-star car with this pack added.” Seems we got our long-termer a little too early.

I’ve covered around 1,000 miles and from the outset I have been won over by the Tipo’s charm. There’s a pleasant and cheerful sense to the way it goes about its business, the cabin is spookily quiet and the engine serves up a delightful dollop of torque.

The chassis leaves a lot to be desired, however.

In the wet it’s eager to understeer and more spirited driving will realise a light rear end which doesn’t inspire confidence.

However the Tipo does cope with the motorway slog pretty well and it’s easy to manage in stop-start traffic.

If we had to part company now I’d be pretty upset as the Italian charm of this otherwise mainstream hatch is really starting to appeal.