"Its inoffensive styling should appeal to most and the abundance of space will be particularly appealing to drivers with families." 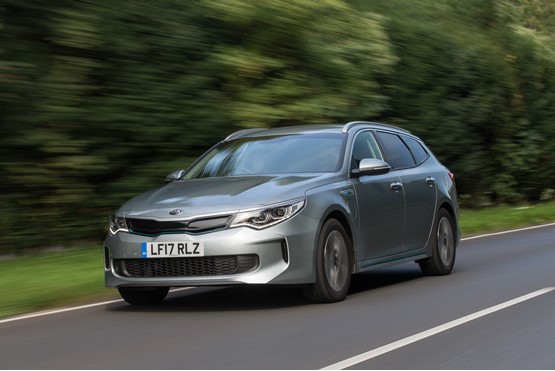 Kia is putting a number of car manufacturers to shame with its recent electrification efforts.

The Optima plug-in hybrid (PHEV) was the brand’s first foray into alternative power and it now offers electrified versions of the Niro and Soul – it is also likely that an electrified Stonic will debut before the end of 2018.

The Optima PHEV uses a 2.0-litre naturally aspirated petrol engine mated to an electric motor. Combined, the two develop a maximum output of 202PS and, more crucially, an electric-only range of up to 38 miles.

Kia claims an average fuel consumption figure of 201mpg, but as we’ve come to expect with plug-ins this figure is never really achievable in the real-world.

Still, during our week-long test we managed more than 60mpg in the Optima, which is respectable and somewhat better than we’d expect from a similarly-powered diesel equivalent.

One of the key benefits of the Optima is space. The cabin is huge and offers plenty of room for occupants, front and rear. In the boot, a small amount of luggage space is sacrificed for the battery pack, but the Optima Sportswagon will still swallow plenty of luggage, dogs or shopping.

Performance isn’t electrifying, despite the battery boost. Acceleration from zero to 60mph takes 9.4 seconds, which is mainly hampered by weight. The Optima Sportswagon weighs 2.2 tonnes and that weight is noticeable when trying to accelerate.

In corners, the bulk of the car is apparent and will disappoint keen drivers, although as the weight is mainly confined to the chassis there is a reassuring feeling of stability.

For company car drivers the Optima offers a significant benefit-in-kind (BIK) advantage, with annual tax of £912 for 20% taxpayers. This is due to its low CO2 emissions of just 33g/km.

The only other plug-in hybrid estate in this segment is the Volkswagen Passat GTE. It is more expensive at £38,875 and therefore has higher running costs for fleets at 48.5p per mile vs the Kia’s 44.5p.

While drivers may find the tax benefits alluring, at this price point the Kia must compete with established premium rivals like the BMW 320d M Sport touring. At £35,810 the more desirable German estate is similarly priced and will only cost a business around 3p more per mile to run than the Optima. Drivers, however, will have to fork out more than £2,000 per year (20%) for the privilege.

Another alternative is the much-cheaper Ford Mondeo ST Line estate. With a 180PS diesel engine it offers similar performance and better driving dynamics than the Kia, for £10,000 less. Over four year a fleet will save 10p per mile but emissions of 119g/km mean it can’t compete on the environmental front.

The Optima is well-suited to fleet requirements. Even with an empty battery, it can exceed 45mpg and comes equipped with all the technology a driver could need.

Its inoffensive styling should appeal to most and the abundance of space will be particularly appealing to drivers with families.