"Materials and build quality in the cabin are both excellent, easily comparable to the V60’s closest rivals, while the design is fresh with plenty of nice touches" 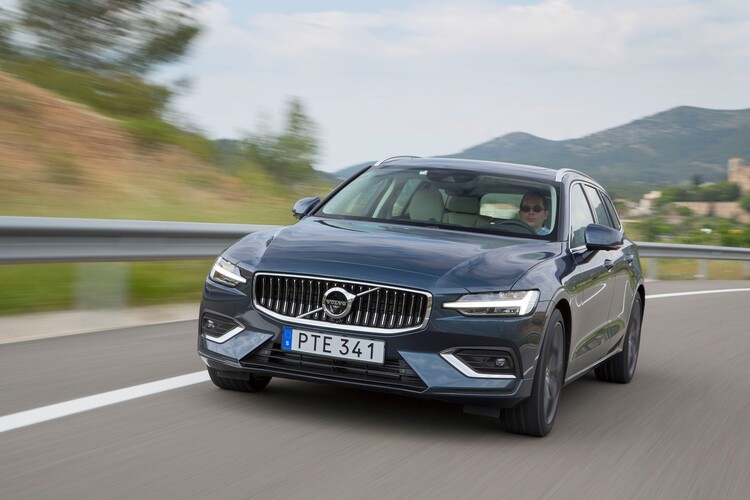 The new V60 is one of the last of its kind; a new Volvo range available with a diesel engine. Earlier this month, the manufacturer announced that from next year it will introduce no new model ranges which use the fuel as it seeks to become an industry leader in alternatively fuelled vehicles.

The V60 will play its part in this. Within the next year, it will have T6 Twin Engine and T8 Twin Engine petrol-electric plug-in hybrid engines.

With P11D prices starting at £31,550, Volvo expects the D3 to account for 75% of V60 registrations in the UK – exactly the same proportion of sales which the manufacturer expects to go into the fleet sector. Orders are being taken now, with first deliveries due in early Q4.

The V60 is the fifth model based on Volvo’s Scalable Product Architecture (SPA) platform, after the larger S90, V90, XC60 and XC90. This has allowed it to significantly increase the interior space on offer.

It also shares the exterior and interior styling cues which have made Volvo’s range stand out in the premium sector.

The V60 is 13cm longer than its predecessor with a squarer back end to increase practicality, but this doesn’t prevent the V60 from being a handsome car.

It still looks svelte and, at 529 litres with the rear seats in place, its boot is around 100 litres larger than that of the previous V60. This makes it the biggest in the mid-size premium estate class (Audi A4 Avant 505 litres, BMW 3 Series Touring 495 litres, Mercedes-Benz C-Class estate 490 litres).

Folding the rear seats down increases space to 1,441 litres and creates a flat floor level with the bottom of the boot aperture, making it easy to get loads in and out. Each model comes with a power-operated tailgate.

The car’s occupants also benefit from increased space. The V60’s wheelbase is 10cm longer than that of its predecessor and this translates into plenty of interior room. Rear legroom is particularly generous.

Materials and build quality in the cabin are both excellent, easily comparable to the V60’s closest rivals, while the design is fresh with plenty of nice touches – such as the frameless rear-view mirror – to offer an enticing alternative to its rivals.

Equipment levels throughout the range are generous, too. At launch, four trim levels are available – Momentum, Momentum Pro, Inscription and Inscription Pro – with R-Design, R-Design Pro, Cross Country and Cross Country Pro to follow in due course.

Volvo expects Inscription to be the most popular trim level at launch, with R-Design later taking that position – and 30% of registrations – when it is introduced.

Being a Volvo, plenty of safety equipment is standard or available as an option.

All versions come with the City Safety suite of collision-avoidance aids. These include automatic emergency braking, which can detect vehicles, pedestrians, cyclists and large animals in front of the car.

The automatic emergency braking can also help avoid a collision with an oncoming vehicle.

City Safety also includes Steering Support, which can provide additional steering input to help a driver steer around an object in an emergency. This also forms part of Oncoming Lane Mitigation, which helps steer the car back to its side of the road should it inadvertently move from its lane into the path of an oncoming vehicle.

The improvements over the previous V60 continue on the road. We drove a D4 Inscription Pro and the level of refinement impressed, with little road or wind noise intruding into the cabin.

It’s a comfortable car to ride in, too, with the suspension preventing most of the road imperfections from being felt by occupants, while there’s a nice weight to the steering as well.

Volvo expects the V60 to be one of its biggest sellers in the UK and, based on our initial experience of the car, it deserves to be.