DS 7 Crossback suits those who desire space and style

"To look at, the DS 7 is rather striking. It has a bold, almost intimidating, stance with a large radiator grille and distinctive light signature." 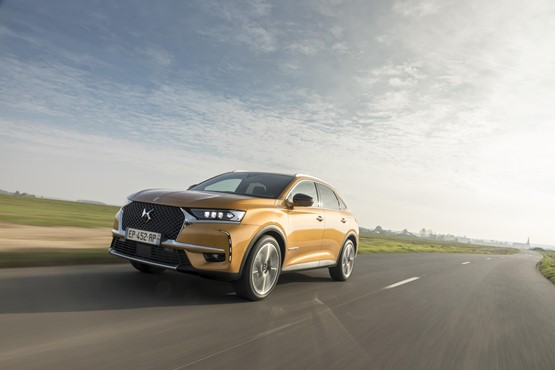 Premium SUVs aren’t something you’d necessarily associate with a French manufacturer, but Citroen’s luxury offshoot DS, which is now a standalone brand, has decided to enter the segment.

The DS 7 Crossback is the first ‘proper’ DS to be launched, as previous models were simply re-badged Citroens.

To look at, the DS 7 is rather striking. It has a bold, intimidating stance with a large radiator grille and distinctive light signature.

Concept car-like styling at the rear gives the DS something that none of its rivals have managed: exclusivity.

Inside it’s the same story. The transmission tunnel is adorned with switches, leading up to a widescreen infotainment display. Everything is angular and tactile. It is rather brilliant.

Our Performance Line test car was fitted with an alcantara interior, which extends to the dashboard and door panels. It is much more upmarket than some of the more obvious models in the segment.

Under the skin, the DS 7 shares its underpinnings with the Peugeot 5008, which isn’t necessarily a bad thing as the 5008 is good to drive.

While fuel economy around town was a little low, on the motorway it was happily averaging more than 44mpg.

There is a more frugal 1.5-litre diesel that emits just 101g/km, but its 130PS output is not in keeping with the DS 7’s luxury persona.

We were also able to test the 180PS diesel, which is slightly more expensive for the driver but should mange 50mpg.

When it comes to driveability, the DS 7 doesn't live up to the 5008. Its chassis struggles to make use of the power and refinement becomes an issue when you drive the car harder.

It doesn’t quite manage to achieve the traditional French approach to luxury, which is comfort, but also lacks the driver engagement of a German or British rival.

There is a host of high-tech equipment available, including night vision cameras and a predictive suspension system.

Practicality is also a strong point, the boot is huge and offers low and wide access as the tail lights are built into the tailgate.

Passengers are unlikely to complain either, as there is adequate head and legroom.

The DS 7 offers an alternative choice to the segment norm. In many ways it can not compete with the likes of the BMW X3 or Jaguar F-Pace, but in others it completely excels.

For drivers who favour space and style over driveability, the DS 7 provides a well-equipped and cheaper alternative to the conventional luxury SUV.

DS is joining a race to ride the electric vehicle (EV) adoption wave and to establish itself as the PSA Group’s pioneering premium brand.