" It still has that scaled-down S-Class feeling, and still looks to be a cut above when parked next to a BMW 3 Series, Audi A4 or Jaguar XE." 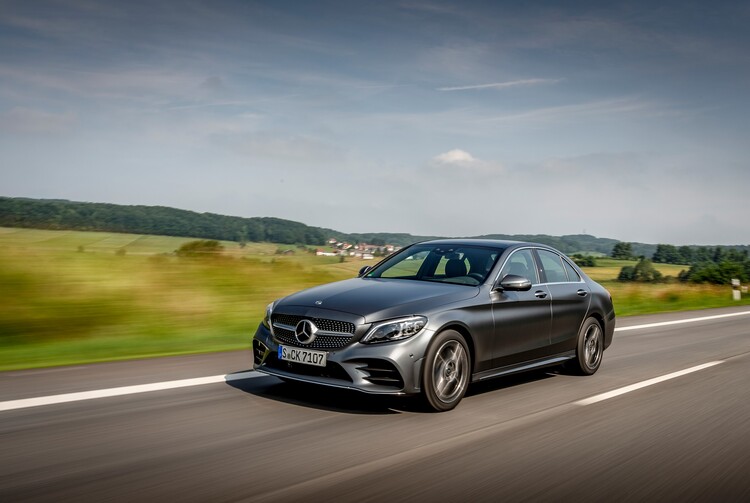 The C-Class is a hugely important model for Mercedes-Benz globally, and it’s the best-selling model in its range in the UK, with around 46,000 registrations in 2017 across all body styles.

Saloon, estate, coupé and cabriolet are refreshed at the same time, with some engine variants arriving later.

This unit has been designed with the exhaust after-treatment system close to the engine to dramatically shorten its cold running phase, and allow it to start working effectively sooner.

The C 200d now produces 160PS, while the C 220d produces 194PS. Only the entry-level SE grade in the C 200d comes with a manual transmission – all others are fitted with Mercedes-Benz’s nine-speed automatic.

The entry point to the petrol range is a C 200 mild hybrid 184PS 1.5-litre turbocharged engine, with the 48V battery able to deliver a brief boost before the turbocharger reaches optimum performance and eliminates turbo lag. It’s also possible to coast without the engine running.

Sport, at a £1,650 premium over SE, lowers the standard suspension by 15mm, and adds LED headlights, and Artico synthetic leather upholstery.

Several packs are available that cluster a number of options together. The Premium pack, priced at £2,795, includes a digital instrument display, ambient lighting with a choice of 64 colours, Comand Online navigation, multi-beam LED headlights and wireless phone charging for compatible smartphones.

Premium Plus, priced at £4,995, has the equipment in the Premium pack, plus a 360º camera, Burmeister surround-sound audio system, keyless go and a panoramic glass roof.

There is an Airmatic handling pack, priced at £895 (standard on AMG C 43), which adds air suspension.

Perhaps it’s more difficult now to make the C-Class look and feel special, as there are so many of them on the road as part of the company’s drive to be the number one premium car brand by volume.

But it still has that scaled-down S-Class feeling, and still looks to be a cut above when parked next to a BMW 3 Series, Audi A4 or Jaguar XE.

The new 2.0-litre diesel engine is markedly superior to the old 2.1-litre unit in the previous model, with the improved performance in the 220d (with 24PS more than its predecessor) echoed with better refinement too.

Perhaps it’s unusual to see the dashboard screen close to front seat occupants that must still be accessed via a controller on the centre console (no pinching the screen here to zoom out of the map), but perhaps it would take a new-generation model to break free from all of the elements that might appear a little dated in 2018.