"The Camry is no match for a BMW 3 Series – it’s not meant to be - but its stiffer shell and new suspension design does a decent enough job in the bends with little body roll and sharp steering." 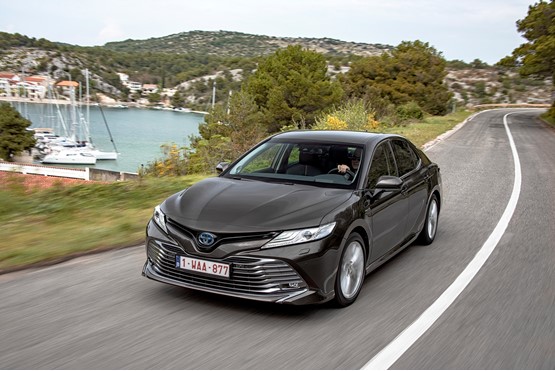 Toyota is on a bit of a roll at the moment. It recently impressed us with the revival of the Corolla, replacing the dowdy Auris, and now it’s bringing back the Camry to plug the gap left by the Avensis.

Fleets are the target market for the new model, expected to account for 80% of sales. While Toyota doesn’t have strong sales aspirations for the Camry – only 500 will be sold this year – it believes that having a broader model range will increase its chances to scoring lucrative fleet deals.

There is only one engine and two trims to choose from, keeping the line-up simple. The Camry uses a 2.5-litre petrol hybrid, the same one that’s fitted to the Lexus ES. Customers can choose from Design or Excel models, with prices starting at £29,995. 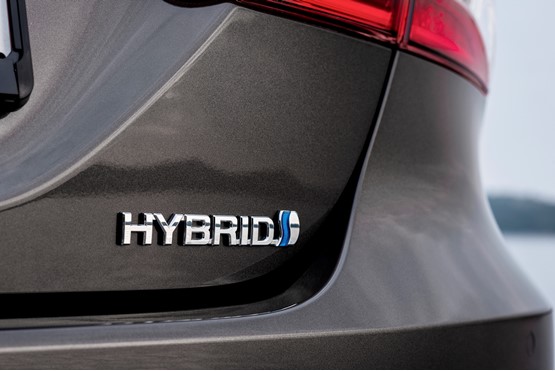 The Excel – set to account for a quarter of sales – adds larger 18-inch alloy wheels, blind-spot monitor and a wireless charging tray.

Interior quality is very high, almost Lexus-like, with robust switchgear and swathes of soft touch materials. Long journeys should be no trouble in the Camry. Its seats are supportive and comfortable, there is little wind or road noise and the driving position is easy to optimise.

There’s a decent amount of space in the rear and clever packaging of the battery has left room for a 524-litre boot, considerably larger than the one in a Ford Mondeo Hybrid (383l) and bigger, even, than that in a Mazda 6.

Handling is best described as safe and secure. The Camry is no match for a BMW 3 Series – it’s not meant to be – but its stiffer shell and new suspension design does a decent enough job in the bends with little body roll and sharp steering.

The engine develops 215PS, giving the Camry an advantage over similarly priced cars in this segment. It’s enough to get the saloon from 0-62mph in 8.3 seconds and promises average fuel consumption of 50-53mpg.

During our testing we were impressed that the Camry appeared to hit the advertised mpg figures with little effort. A strong feat for a large petrol-powered car.

The lowest figure we saw was around 40mpg, suggesting the Camry really could be a feasible alternative to a diesel for higher mileage users. 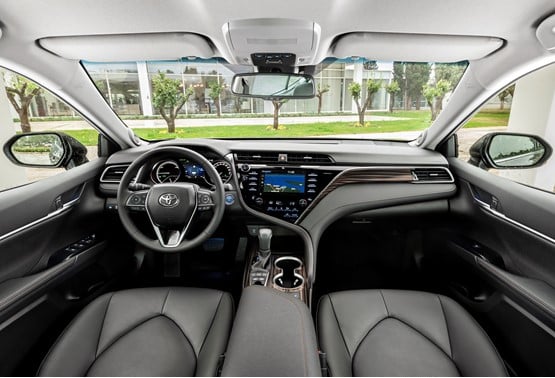 As with all Toyota and Lexus models we’ve recently tested, our biggest disappointment with the Camry is the infotainment system. Cheap-looking graphics and poorly arranged menus are one thing, but the sometimes incomprehensible sat-nav directions make for a stressful experience. On more than one occasion we came across Camrys on the launch event making U-turns or going the wrong way.

The lack of Apple Carplay or Android Auto means users have little alternative.

Overall, the Camry is comfortable, efficient and well equipped. As a fleet proposition the numbers stack up so it should appeal to drivers who want a cost-effective conventional three-box saloon and not an SUV.

There is an expectation – and a need in a competitive sector – that premium cars not only feature plenty of advanced technologies, but that they are easy to access and use.