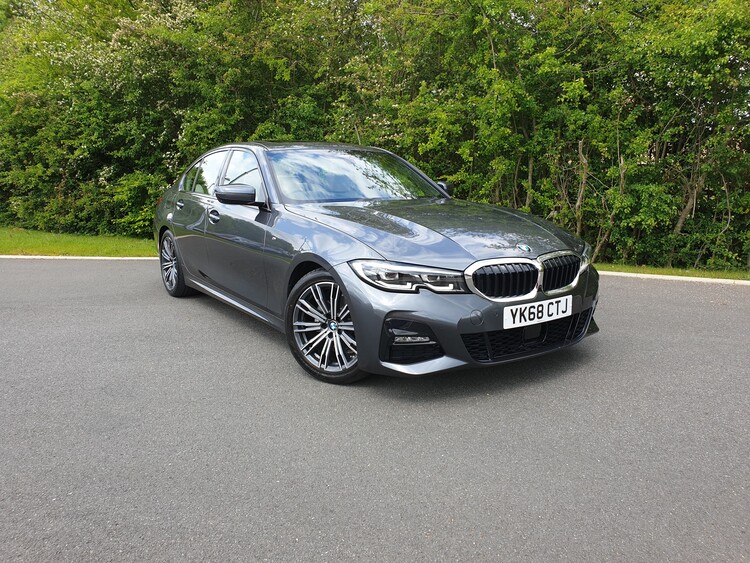 Our time with the BMW 3 Series ended prematurely. On a trip back from the local fuel court, a message flashed onto the screen instructing me to ‘stop carefully. Do not continue driving’.

Fortunately, I was only a mile or so from the office, so I got back and informed BMW.

The car, which was due to return in two weeks’ time, is, as I write, on the back of a truck returning to BMW for good. The issue has something to do with a lack of charge going to the battery which means some safety-relevant functions may fail. 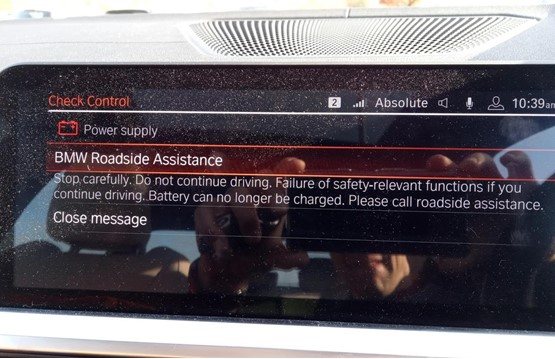 It wasn’t the first electronic gremlin during our six months with the 3 Series; when we first took delivery, the electric windows didn’t work, but they fixed themselves overnight. BMW put it down to teething problems on an early production model (UK deliveries started in March/April).

Since then, aside from a windscreen replacement caused by a stone chip, it has been pain-free – and enjoyable – motoring.

The 3 Series remains a benchmark in this class. Better-looking than its predecessor with sharp creases, aggressive-contoured front and low-slung bonnet, it features more interior space and higher levels of equipment, with precise, progressive handling and a hairpin-loving chassis.

The 2.0-litre diesel engine is decent – capable of reaching 60mpg on longer journeys - but the WLTP-rated emissions are likely to price the 320d out of reach on BIK from April (see October review) compared with the 330e which will account for the majority of fleet sales in 2020.

It’s a little firm, perhaps, but with BMW that’s to be expected. It remains one of our favourites.

Is diesel still the right choice for fleets? - October 2019

Our 320d is an excellent car – we’d almost agree with BMW corporate sales manager Rob East that it’s “all the car you need”, as he told us at this month’s Fleet News Fleet Live show.

Almost agree, because while the performance, driving experience, interior quality and technology are all outstanding as noted in previous tests, our model is no longer the car for fleets. At least, not from April next year.

Registered today, the 320d has correlated NEDC CO2 emissions of 112g/km, putting it in the 30% tax bracket; from April 2020, the WLTP figure kicks in, and the official emissions surge to an eye-watering 142g/km. Then a taxpayer will have to pay benefit-in-kind (BIK) at 37% – the maximum. 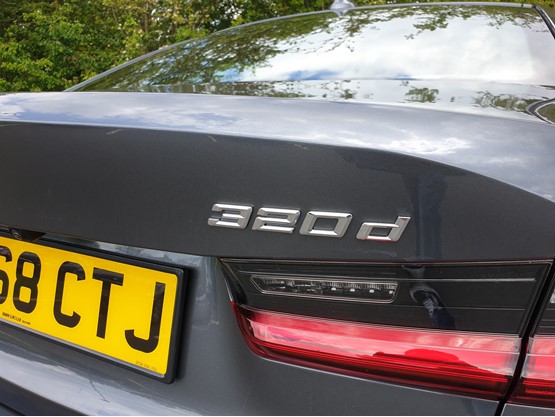 Tough to stomach? Well, put in context, your drivers can buy the same car on a personal contract lease for similar money, but they will have to pay for their insurance on top. So, it’s still a better option for them than going private – unless they take the cash and lease a three-year-old BMW for half the price, which many do.

But there is an alternative: the BMW 330e. It has all the benefits of the 320d but with CO2 emissions of just 38g/km WLTP. And, with an electric range of around 36 miles, it sits in the 12% tax bracket.

No wonder, Rob East expects the 330e to account for 60%-plus of corporate sales. Filling the gap between diesel and full electric, this really could be all the car you need.

A BMW 3 Series was the first long-term test car I had when I joined Fleet News a decade ago. I kept it for a few weeks then swapped for the Škoda Superb. The 3’s cabin was dull and unwelcoming, bereft of any decent equipment; in contrast, the Superb was packed full of technology, had tactile materials and much greater appeal.

What it lost in driving thrills, it made up for in ambience and driver (and passenger) experience.

So why have I just swapped out of our excellent long-term Peugeot 508? Well, the 3 Series has been through two model changes since then and the difference between 2009 and 2019 couldn’t be more pronounced.

The light tan soft leather seats are excellent, with good lumbar and side bolster support; the switches and controls are high quality and beautifully laid out around a well-designed yet functional dashboard; the12.3-inch multimedia screen offers both touch function and iDrive operation with logical commands; even the voice control understands simple instructions. 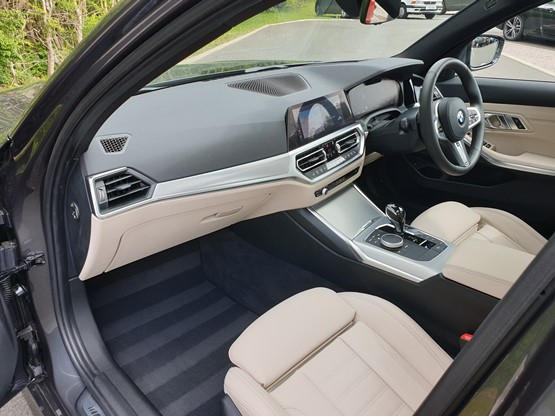 We also have a head-up screen which can be configured to include speed, restriction warnings and sat-nav instructions (worth noting that it’s better to follow these than the on-screen route which is hard to distinguish from the road markings).

Despite these extensive plaudits, it hasn’t been an auspicious start to my time with the car. Just prior to the driver change, a stray stone rebounded under a tractor’s wheel and careered into the top left corner of the windscreen.

It left a sizeable bullseye chip with a star break of a couple of inches in each direction.

The replacement requires expert recalibration to protect the integrity of the advanced driver assistance systems (ADAS).

Initially, because this model was launched earlier this year, the dealer couldn’t say when the windscreen would arrive.

I was assured by the windscreen replacement company, National Windscreens, that the car was fine to drive, as the multi-layered laminate would provide sufficient protection. It might crack a little more, but it wouldn’t break and, as the chip was not in my line of vision, I had the green light to continue (with BMW’s blessing).

However, I then received a call to say the windscreen would arrive in a couple of weeks.

The new screen has now been fitted with minimum fuss, and with full ADAS calibration carried out by National Windscreens.

Hopefully, our final three months with the 3 Series will be less eventful.

The new BMW 3 Series offers another step-up in technology from the outgoing model with a range of digital services, including voice control.

It marks a new era for the BMW Group in which it says drivers will increasingly be able to operate their car and access its functions and information simply by speaking.

BMW’s Intelligent Personal Assistant, which is available with Live Cockpit Professional (a standard feature on the M Sport), rivals the Mercedes system and responds to the prompt ‘Hey BMW’. However, unlike other digital assistants, drivers in the BMW can give the Intelligent Personal Assistant a name (a christening ceremony, however, is optional).

The German manufacturer says this creates even greater individuality and personality, which is perhaps stretching it a little, but all the same it is a clever bit of tech.

For example, saying “Hey BMW, I’m cold,” will prompt the BMW Intelligent Personal Assistant to adjust the temperature inside the car accordingly.

Furthermore, through connecting with the sat-nav, the digital assistant can find parking spaces at the destination, provide information on traffic jams along the route and remind the driver when they need to set off.

Navigation is also connected, offering a range of digital services that aims to make route planning both in the car and away from it, much easier.

Choosing the technology pack for an extra £1,800 and, along with head-up display and wireless charging, the car will come with gesture control.

Turning the volume up on the stereo with a turn of a finger is akin to witchcraft, but I soon discovered that it can also be a bit hit or miss.

Having successfully increased the volume to its highest setting, my finger twirling became increasingly frantic as I struggled to turn it down.

I eventually gave in and resorted to reducing the volume manually rather than have passers-by thinking I was hard of hearing with Test Match Special booming out of our long-term test car.

The new BMW 3 Series comes in three familiar trim levels – SE, Sport and M Sport – each with a good array of standard equipment.

The Sport model, meanwhile, includes a larger fuel tank and leather sports seats, and the M Sport offers lot of extra equipment, such as a head-up display, gesture control and a much sportier appearance inside and out.

The new 3 Series comes with a pair of screens as standard – a nine-inch display on the dashboard and a six-inch unit replacing the instrument display – unlike its rivals, the Mercedes Benz C-Class and Audi A4.

The nine-inch touchscreen is also controlled by the rotary iDrive controller on the centre console, while the six-inch unit is controlled via the steering wheel. 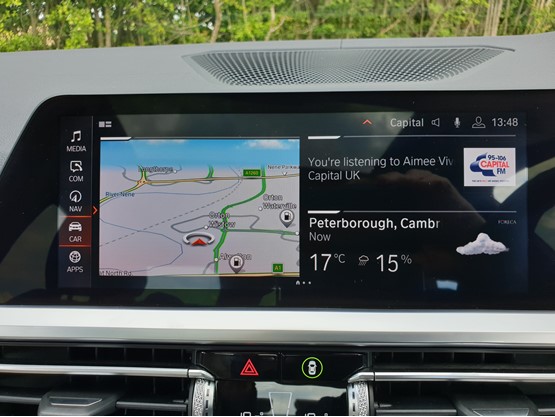 Fleets choosing the M Sport model, which Fleet News currently has on trial, will also receive the upgraded Live Cockpit Professional system, with a 12-inch instrument display and a 10-inch central touchscreen, including the BMW Personal Assistant.

All cars feature a new generation six-speed manual gearbox and the eight-speed Steptronic transmission. As an alternative to rear-wheel drive, there is a BMW xDrive all-wheel-drive option.

The BMW 3 Series is a firm favourite in the company car market and first impressions on this latest model suggest that is not about to change.

Joining the Fleet News long-term test fleet, the 320d saloon in M Sport guise is everything you would expect from this iconic car.

Great styling, lots of tech, and the poise and responsiveness on the road you would expect from the German manufacturer.

Emissions start from 110g/km for an automatic transmission and 115g/km for manual. Our test car has NEDC-correlated figures of 112g/km, but this will rises to 142g/km under the new Worldwide harmonised Light vehicle Test Procedure (WLTP), which will apply if registered after April 6, 2020. 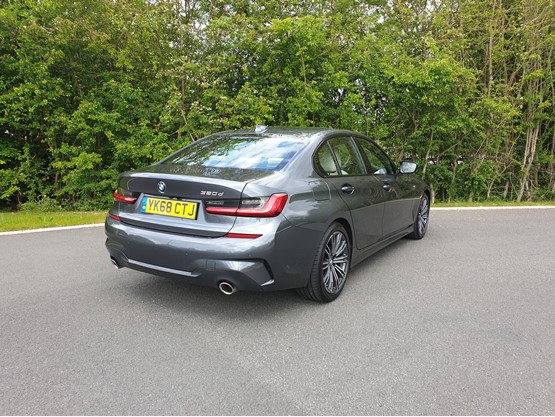 The PHEV will be able to travel up to 37 miles on electric power alone – a 50% increase compared to its predecessor – while average combined fuel consumption will be 138mpg with CO2 emissions of 39g/km.

All cars feature a new generation six-speed manual gearbox and the eight-speed Steptronic transmission. As an alternative to rear-wheel drive, there is a BMW xDrive all-wheel-drive option.